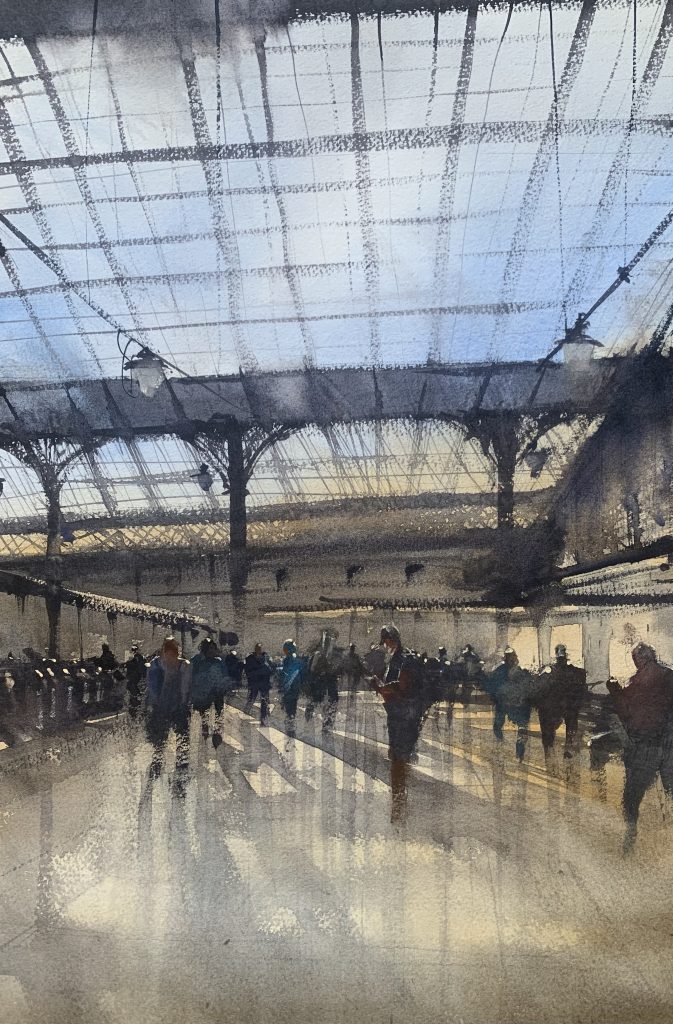 I recently had to get to Brighton train station early in the morning to get a train up to London. Aside from the disruption of an unusually early start to the day, it was great to be in Brighton’s wonderful train station before the morning rush hour started.

I arrived in time to get a coffee for the train and was surprised by the light flooding into the station. I had time to get a few photos thinking that I might be able to add to my collection of Brighton station paintings!

When I was sifting through my photos, I was, as usual, drawn toward the station’s incredible architecture. Even as I was planning and composing my painting, at the sketching out stage, my aim was for the station architecture, and especially the roof, to take centre stage.

If only I knew then what I know now

Only as the painting progressed did I start to explore the reference photos in greater detail. At this stage, I began to see that the real fascination in the image was not the station’s roof but the floor! Perhaps it was because I was there so early, and the floor had been cleaned during the night and its polished sheen not yet trampled upon by hordes of commuters, but the mixture of shadows and reflections was wonderful.

Had I the presence of mind to spot this from the outset, I think I’d have tackled this painting differently. I tried to indicate some of the intricacies of the shadows and reflections; however, it was too little too late to make much of a difference. Knowing what I know now, I’m keen to have another go at this painting but this time, to go all out on the floor.

It’s hard to view this painting objectively now because all I want to do is to move on to my next interpretation of this scene!

Considering the architecture was what I thought was the most compelling feature, it’s possibly one of the weakest elements of the painting! I was quite pleased with how I’d managed to simplify an enormous amount of visual clutter, and the figures are a little more varied and balanced than in some of my paintings, which is encouraging, but the more I look at this, the more I want to start it all over again!

I’m afraid there won’t be any prizes for guessing what I expect to be sharing with you in a week’s time!

You may remember that earlier this year I was one of the artists selected to represent England and Wales at the Fabriano Acquarello convention in Bologna. It was a nice treat to receive the catalogue from this year’s convention that took place in May. It’s quite a publication! At over 700 pages long, it probably includes well over 1,000 artists from all over the world! I’m hoping to spend some time flipping through this in the weeks ahead and hope that it may introduce me to lots of other watercolour artists to be inspired by!

Atelier by the Sea Open exhibition

This is just a quick reminder that the Atelier by the Sea Open Exhibition begins this week! The exhibition will open to the public on Friday 15th July and will run until 3rd September. For anyone unable to make the exhibition in person, all the works will also be available to view and buy on the gallery’s website.

Follow John Haywood Watercolours on WordPress.com
PrevPreviousAnd the moral is: always check your spam folder!
Nextso much to say, so little time to say it!Next