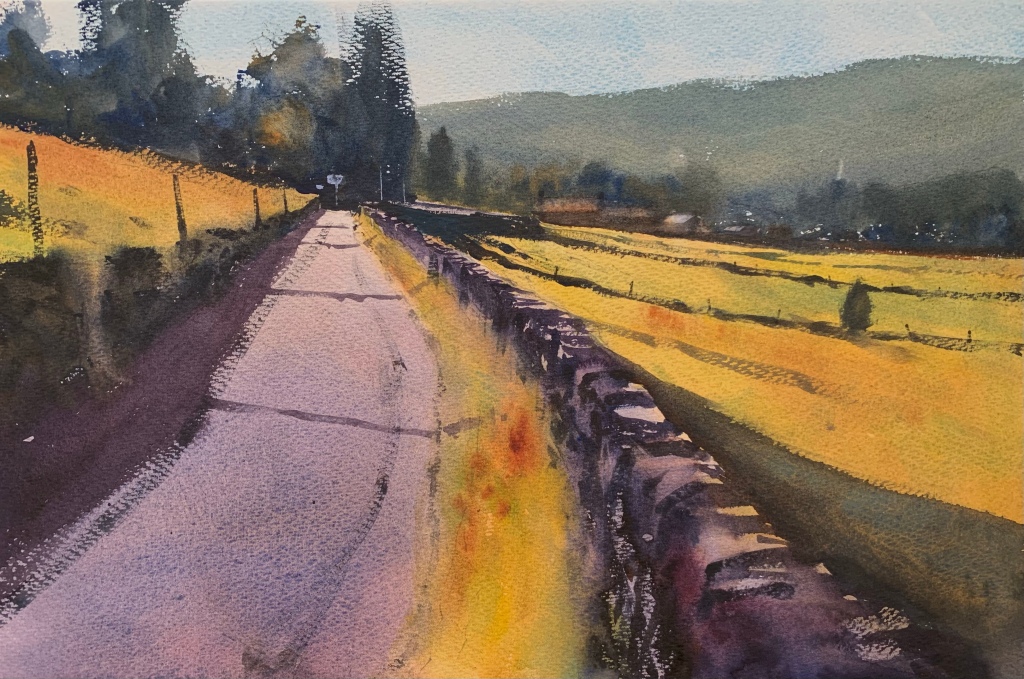 It’s all about the green

I received an email on Friday morning containing a worksheet with all the information and links that I needed to get cracking. Obviously, it wouldn’t be right to share the exact resources that I’ve been provided but I am happy to share the bones of what’s being covered along with the paintings and studies that I do in response to the exercises.

During my time painting, I’ve mainly learned experientially, by actually painting, rather than by the theory of how to paint. The same applies to my understanding of my palette and mixing colours. I’ve never carried a ‘ready mixed’ green in my palette, preferring instead to try to learn to mix my own greens. This has often been a bit of a hit and miss exercise and is one of the reasons that this particular course appealed to me.

It was really interesting to go through the theory behind what makes the colours do what they do when mixed, depending on where they sit on the colour wheel. It’s already given me an idea for a little project to do when I have a little more time! In the meantime, however, I couldn’t wait to get stuck into some of the practical work!

The worksheet contained links to a couple of reference photos for participants to download and to a video demonstration from Paul. I was really excited to see this because, beyond my interest in green, I greatly admire Paul’s paintings and was keen to see how he constructs his paintings.

First up on the demonstration video, Paul did a series of practical colour swatch exercises to explain and demonstrate the colour wheel principles before moving on to his demonstration painting.

This is my first effort based on the reference photo provided and following Paul’s demonstration video:

I was pretty pleased with how this turned out and it was great to be able to watch the video, then go through it again as I painted this version, pausing it at will when I needed time to catch up! The overall approach is similar to that of many watercolour artists. The process begins with a loose pencil sketch followed by a loose first wash. This is followed by what Paul describes as a ‘blocking in’ wash. This establishes most of the main elements and, once completed, is followed by a final stage of details.

It’s not strictly the darkest darks saved for the last stage, as is often the case, but the final stage really is just a few finishing touches, or at least it was for Paul!

I really enjoyed painting this view, so much so that I decided to return to it later on but this time to go large and paint a half sheet size version. With the first effort, I felt I’d gone a little too dark with the cast shadow of the wall on the left-hand side. Similarly, the grass verge on the left of the wall felt as if it was in the shadow when actually it was sunlit. Overall though I just wanted to try my hand at this all over again!

I could be critical and say that the fields look a lot more yellow, rather than the vivid green I’d hoped for, but I did this late at night by electric light which I think threw my judgement a bit!

Our homework was to apply the colour mixing principles and what we’d learnt from watching the demonstration to another view, taken at the same location but facing in a different direction.

I didn’t find the composition of this image as appealing but, armed with a slightly greater awareness of how to tackle my greens, I was eager to give it my best!

I tried to apply similar principles to this as Paul had demonstrated but, I didn’t feel I was able to do so with the same confidence as I’d achieved with the other composition. This composition had a lot of abstracted elements, especially the grass verge in the middle. Also, the bottom half of the painting is in shadow and was torn between trying to indicate this with as I applied the paint, or to paint it as if it wasn’t in shadow, and to apply the shadow later!

In this first effort, I opted to try to apply the painting to match the tonal of it being in shadow. I also felt that I’d gone in a little too heavy with some of the darks. I wasn’t discouraged as such, but I did feel that I could do a better job of it!

Here’s my effort at a better job of it!

There’s probably a moral to this tale but, overall, I still prefer my first take on this. At the time of writing, I’m still expecting that I’ll do another take on this as I’m still not satisfied that I can’t do better! I have a few ideas that I’m mulling over and will hopefully have an update to share next week.

All participants are invited to submit their paintings to Paul for him to critique. I have until the 31st of January to submit mine so still have a few days to see if I can improve on these efforts!

Although this isn’t the most exciting of my New Year’s resolutions, it may yet prove to be a significant one.

I’ve mentioned in the previous posts the challenges I’ve experienced when painting plein-air when wearing my glasses that have a transition lens in them. This makes judging the tones between what I’m looking at and what I’m painting incredibly difficult.

When I first ordered the glasses I currently use I had hoped that transition lenses would aid my plein-air endeavours, but the opposite seems to have been the case.

I have now ordered a new pair of glasses that are totally clear and hope that this will make a significant improvement. So much so, I can already feel that I’m putting a disproportionate amount of hope and faith that these are going to totally transform my abilities in the field!

At the very least, however, it’s one less thing I’ll be able to use as an excuse for why things don’t work out as I hoped and, one more thing that I can tick off my list!

I don’t have the new frames and lenses yet but I’m hoping I’ll have them in time for the next meeting of the Brighton Painting Group on the 12th of February.

With two of our family of three in full-time education, one a teacher in a sixth form college, the other a pupil in one of the countries largest junior schools of about 1,000 children, it was probably only ever a matter of time before Covid caught up with us.

To be perfectly honest I’m surprised it’s taken as long as it has, but the inevitable happened over the weekend when all three of us tested positive.

Although it might sound ironic, this hat-trick of test results is probably the best possible outcome. For three of us to have it at the same time is much more manageable than for any one of us trying to self-isolate in a small flat!

Fortunately, we are fully vaccinated and up-to-date with booster jabs. Even so, we’ve both been knocked for six and have had to take time off work. I would hate to imagine how we might have fared had we not been vaccinated! (BTW, this isn’t a prompt to get political. It’s just the decision we made!)

Anyway, after a couple of days feeling pretty ropey as we’ve experienced a wide range of flu-like symptoms, we’re hopeful that the worst of it has passed and our fingers are crossed for a speedy recovery that will see us all out and about again as soon as it’s safe to do so.

Thoughts on It’s all about the green

16 thoughts on “It’s all about the green”