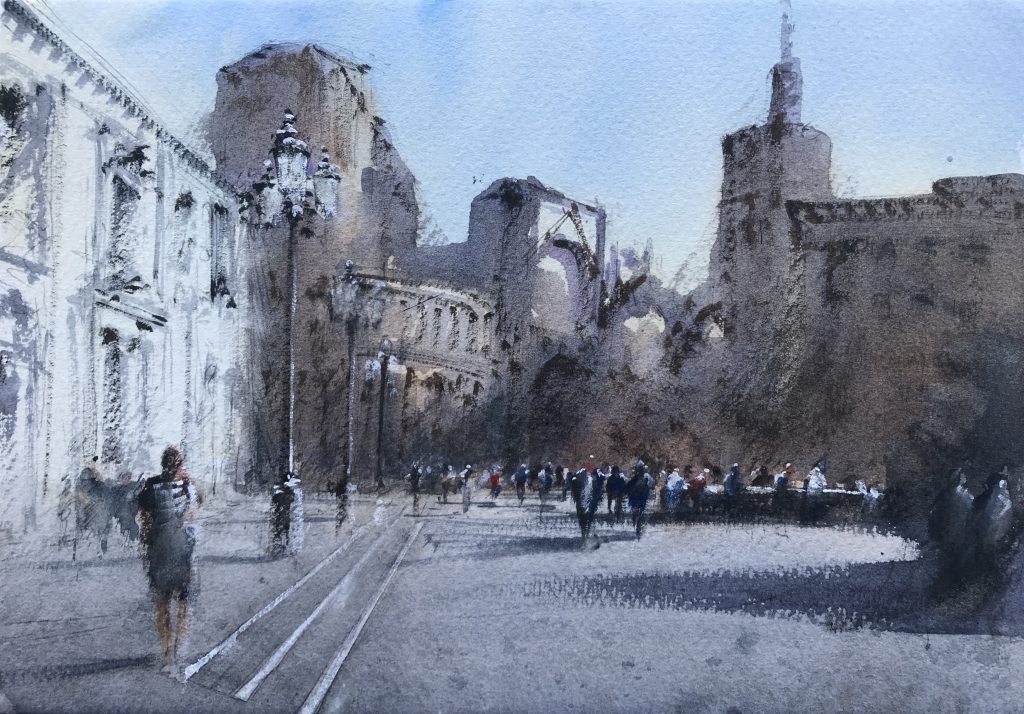 When I was writing last week’s list of new year resolutions, I had a cursory look back over some previous ‘New Year’ posts – partly because I was pretty certain that I could just cut and paste whatever I’d written in previous years and just apply the same to this year!

This process led me to my post for my New Year resolutions for 2020 – where I shared some paintings of a view of Place de la Virgin in Valencia because, at the time, I’d just booked flights to visit later that year and was very excited. The holiday never happened (something cropped up that scuppered all of our plans… can’t for the life of me remember what it was now!) but, looking at the post again, I was immediately drawn back to the view and thought that it would be nice to pay it another visit.

Here were the two versions that I did back in January 2020.

Over recent weeks I’ve only been working in my sketchbook and I’ve been a little underwhelmed with what I’ve achieved. I felt as if I was hankering to get a larger piece of paper and some big brushes and really splash some paint about, and this seemed like a good opportunity!

I also thought that it’s been a long time since a did a work in progress series of images so thought I’d try that again. In my mind, I thought this would number about three step by step images, a first wash, a second wash and finally, darks and details. Let’s see how I got on!

Here’s my starting sketch, which I just about remembered to take a picture of after I’d wet the paper and just before I’d started to apply any paint. (Apologies for the lighting in some of these paintings, it was a particularly gloomy day and I had some lights on, but not my ‘daylight’ light.)

And here’s what it looked like a few minutes later after some applications of yellow ochre, cobalt blue and burnt sienna.

I started my second pass with the most distant dome before gradually working across the painting to the right, before continuing with this was over the remainder of the painting, including the addition of a dark shadow on the right-hand side and foreground.

Up to this point, I’d only used this largish mop brush to establish the main areas of the painting as quickly as possible and without too much fiddling! Next up was to turn my attention to some of the figures and details.

Here you can see where I’ve started to work on the figures throughout the painting, as well as adding in some dry brush details on the background buildings to suggest windows and some architectural details. After this, I took a step back and left the painting alone for a while. I was already pleased with some elements, but also frustrated and disappointed with others! I thought it best to mull it over for a while to consider what I might usefully do next.

After a short period of reflection, I chose to put a little wash of burnt sienna across the two domed buildings in the centre of the painting in an effort to knock them back a little and create a little more depth. I also did a little more work on the furthermost figure to the left, to try and show the light coming from the right-hand side, as well as adding in some highlights on some of the figures elsewhere.

I also decided to extend the foreground shadow coming in from the right so that it went across the whole of the painting. At this point I found myself tempted to continue fiddling, which is never a good sign!

I do still like some of the figures, particularly those in the mid-distance. The figures to the left however feel a little clumsy and overworked and I would have liked to have achieved a greater sense of distance and depth with some of the buildings in the background but, that’s not to say some of them don’t have their moments!

Maybe the acid test is to compare the 2022 version with its 2020 predecessor!

I’d love to hear what others think about the relative merits of these two paintings. For my part, I really wish I could say that I was delighted with the progress that I’ve made over the past two years. In all honesty, however, I don’t feel as exuberant as I would like! I do think this recent effort is better and that it’s a more confident and more accomplished painting but… I perhaps wish that it was much more accomplished! Maybe I’ll revisit this again next year or in 2024 and hope that I can demonstrate greater progress!

In a most unexpected turn of events, I’ve booked onto a painting course with a wonderful artist, Paul Talbot-Greaves. I’ve long been an admirer of his work, especially his watercolours, and it has a particularly personal resonance for me. Paul is based in North Yorkshire, quite close to where I grew up in Saddleworth, North of Manchester on the edge of the Pennines. The landscape, is to many quite bleak, but it’s rich with verdant greens, imposing stone buildings and fields criss-crossed with dry stone walls – all of which Paul capture’s brilliantly in a distinctive and evocative style that transports me right back to my formative years, stomping around the moors, hillsides and villages of Saddleworth.

I’m on Paul’s mailing list so often get updates on his various courses etc but as many of them have been in person (when allowed) and in the north, I haven’t been able to attend. When I got a notification that he was running a course about using green in watercolour that would be delivered over a number of weeks and allowed participants to engage with it at their own pace, well it just seemed like too good an opportunity (not to mention extremely good value for money!).

The course starts later on in January and I daresay that the course will form large parts of my blog posts during February and March! It’s really exciting to have something like this to look forward to and I’m particularly excited at the prospect of learning from Paul. I’m aware that some followers of this blog are also on the course and I look forward to being able to compare notes with you! All together, it feels like a great way to be starting 2022 – and this wasn’t even on my list of resolutions!.