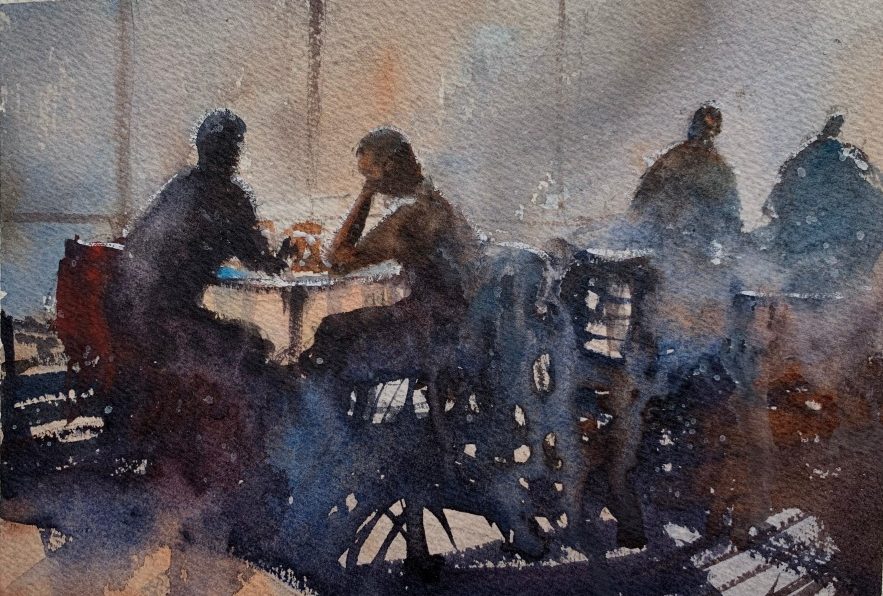 Yet more sketches from the sick bed!

I’m so pleased to report that since last week, my back seems to be recovering in leaps and bounds. Sadly, this analogy is purely symbolic; I fear that actual leaps and bounds may still be some way off!

This post is, I’m afraid, a straightforward sequel to last week’s series of sickbed sketches – although you can discern some signs of improvement in my condition from the ‘background’ in some of these sketches. Some were done whilst still lying in bed, but some were done while sitting upright at a table no less!

Again, many of these were taken from Alvaro Castagnet’s paintings but they still keep my brushes moving and my mind occupied. While I’m painting them, I’m constantly analysing them, what makes them work, what order were things done in, what decisions have been made, what may have been omitted and what may have been added. I hope that all of this will feed into my approach to my own paintings. And if they don’t? Well, there’s no harm done!

This first sketch hopefully illustrates a little of what I mean. This isn’t based on one of Alvaro’s paintings, but it is from a reference photograph rather than a painting:

The following sketches are all based on paintings, or sections of paintings, by Alvaro Castagnet:

I’m hopeful (ever the optimist!) that my back is now well on the road to recovery.

In many ways, I think it’s served as a cautionary shot across the bows that I need to be taking a little better care of myself. Fear not, this doesn’t mean I’ll be stepping back from my watercolour painting.

What I think it will mean is some changes to how I work in the months ahead, especially in terms of dedicating some time for regular exercise (even if it’s just a quick walk around the block to get away from the desk and the computer screen).

Maybe this might also serve as a cautionary tale to others too! Far better to put some small changes in place now than to leave it until something major happens! I wouldn’t like to think of others going through the sort pain and discomfort that I’ve experienced of late when, in many cases, it may be easily avoidable.

Okay, sermon over, I’ve off to do some stretches!

Thoughts on Yet more sketches from the sick bed!

7 thoughts on “Yet more sketches from the sick bed!”