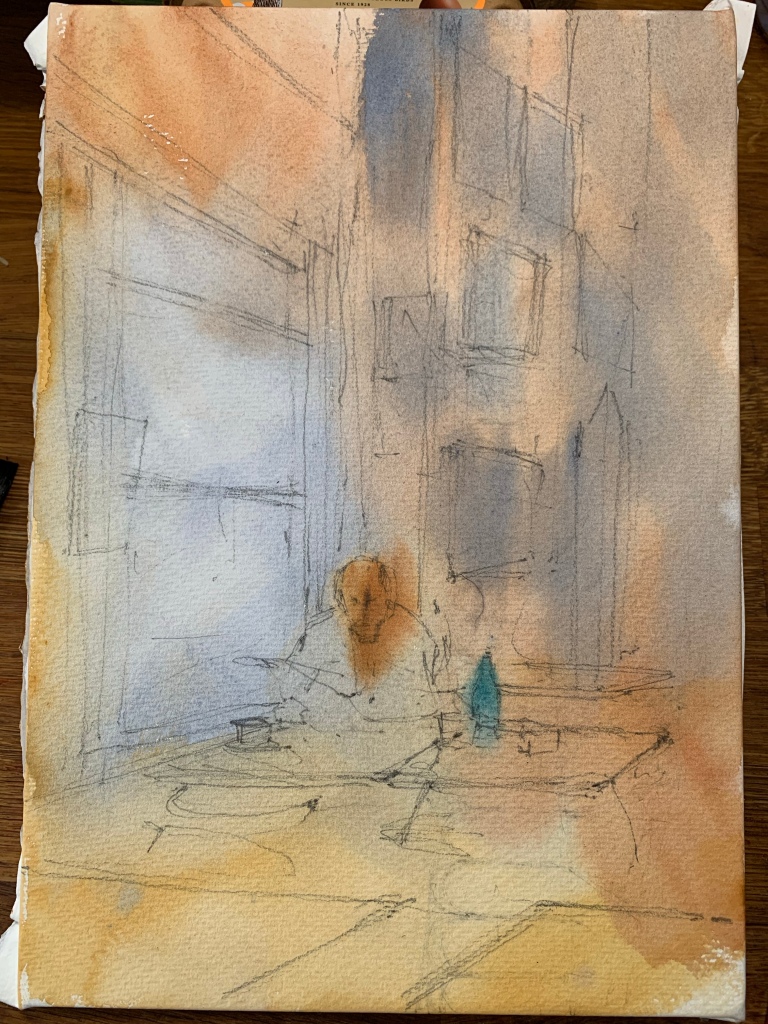 After last week’s rather downbeat post, I was stumbling around the internet in a rather absent minded fashion when I came across Stephen Berry’s excellent blog and website, Seamless Expression. This wasn’t the first time I’ve spent time on this blog, but on this occasion it seemed particularly prescient. I spent a good amount of time immersed in his detailed five part review of his workshop with Alvaro Castagnet in 2014. In one of the posts, Stephen describes how, a few days into the workshop, Alvaro sat the group down and basically berated them for not listening to properly, or not putting into practice the fundamentals that he’d shown them.

I’m not sure why, but something in this post really connected with me. It felt a little bit like I was actually in the room at the same time – if felt as if his comments that day were being directed at me, and that he was telling me a few rather uncomfortable home truths!

At that moment I decided that, for my next paintings, I would try to focus on some of these basics, such as looking at the big shapes, connecting elements, using big brushes, being bold and expressive with my brushstrokes and, this was more one from within myself than from anywhere else, to try to relax and enjoy it all a bit more.

Here’s how I got on with the first painting, which is a quarter imperial in size:

This is after the first wash on you can see my intentionally loose pencil drawing underneath. Something I’ve been focussing on for quite a while now that I don’t think I’ve mentioned here before is this initial wash.

Before I start applying the paint, I give the paper a quick spray to dampen it and then, I apply a wet wash using this squirrel hair ‘mottler brush’

It’s about 3cms wide and it can carry a lot of water/paint. The main reason I’ve been using this particular brush is that I can’t really fiddle about with it! The result is that at this early ‘first wash’ stage, I get the paper covered quickly and freely and, crucially, there aren’t any hard edges, everything is loose and fluid. (On this painting, I did drop in the colour for the bottle, and the face using a smaller brush but while the paper was still wet.

After taking this first ‘work in progress’ photo, my intention had been to take a few more. Sadly, once this has completely dried, and I started painting again – I didn’t actually stop painting until I’d finished!

I resisted the urge to fiddle about anymore with this one. Even though there were parts of it that I wasn’t sure about – it had done it’s job and I actually felt quite invigorated. Certainly enthused enough to start another painting, and this time to go large with a half imperial sheet.

Next on the menu was this city scene:

In this one, I was really trying to treat the buildings as a single connected shape. After the half-hearted paintings that I did last week, it felt good to painting with a little more expression and verve again. This again was partly down to advice from the workshop that Stephen did with Alvaro Castagnet, about breaking elements of the painting down into their component parts and, in this case, treating the buildings as a large shape.

As I had that rare feeling of being on a creative roll – I couldn’t resist trying another, just for luck!

When I think about how I was feeling about my painting this time last week, and looking at these three paintings together as below, well I don’t mind saying that I feel completely rejuvanated! It would appear that all I needed was a good stern talking to and a reminder about some basic principles!

It’s amazing the difference a week can make! (he said making a mental ‘note to self’ to have on hand next time he’s in the creative doldrums!)