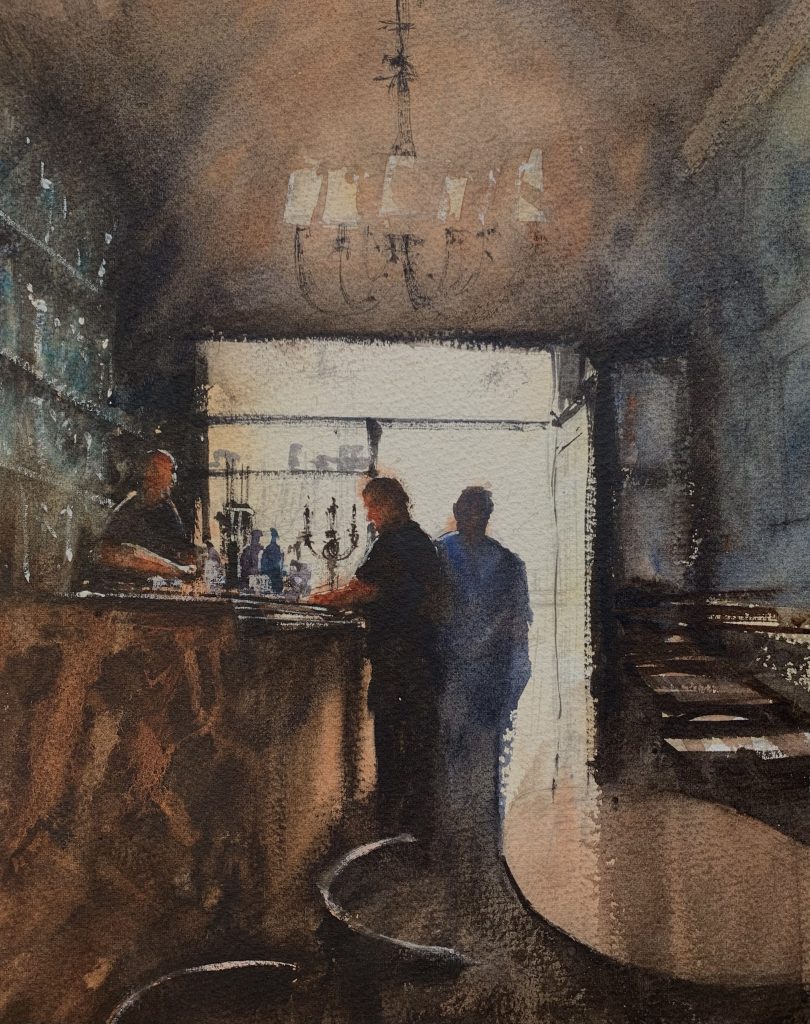 As is common at this time of year, I’ve been embarking on a little bit of spring cleaning. It’s a familiar story, a rather desperate attempt to free up some much needed space by jettisoning some old bits for flotsam and jetsam to make way for more recently acquired flotsam and jetsam.

This included going through a box of books that I found in a cupboard that I haven’t looked at for 7 or 8 years! I was pleased to be able to get put some books aside that no longer carry any practical or emotional attachment, but I also couldn’t help getting distracted by a few of my old watercolour books.

One in particular was ‘Working with Watercolour’, written by Leslie Worth and published back 1980 in London, New York and Sydney.

For a 32 page book, it’s rich with practical advice and demonstrations. The approach is in the vein of Rowland Hilder, whose work I admire greatly – and consists of gradually building up layers of transparent washes. The reason why this particular book stood out to me is that one of the demonstration exercises, titled ‘Sea and Sky’ featured a breaking wave. As last week’s post featured my attempt to capture breaking waves at Brighton pier – I couldn’t resist tackling this exercise:

My spring cleaning continued with some long overdue sorting out of my paintings! First up was the need to trim the edges off all of the paper that I’ve used on my Ken Bromley perfect paper stretcher. This was mainly because they were taking up way too much space!

As I trimmed each painting down, I also sorted them into one of three piles. The pile on the left are my ‘keepers’ – ones that I’ll most likely mount and, should any opportunities arise, these are the ones I’ll most likely exhibit. The middle pile is my ‘maybe’ pile. These are paintings that I don’t think I can do much with, but nor do I feel I can scrap them just yet! The pile on the right is my ‘scrap’ pile. I’ll keep these so that I can turn them over and use the reverse of them for sketches, experiments and playing around with. Most of this pile will eventually end up in the paper recycling bin.

What was nice was to come across a few paintings that I’ve done that, after initially discarding them in disgust/desperation/despair (most usually a combination of all three!), after a little bit of cropping here and there, I now don’t feel quite so bad about them. Both of these were done quite recently. First up, a big sky painting:

And secondly, a bar in Barcelona:

If this image looks remotely familiar, it’s an interior that I’ve painted before but from a different viewpoint. It’s funny because looking at this now, I can’t help but notice that the bartender’s arm looks more like leg of serrano ham that can often be found in bars in Spain and Italy than it does an arm!

In yet more spring cleaning, I came across an old sketchbook from 10 or 11 years or so ago! There wasn’t much of interest in this sketchbook aside from one line drawing I did of a horse that I’ve always been fond of! This sketch was done from life whilst I was sat in field on one of our many camping trips. I was sat at the top of the field, doing a bit of sketching and two horses gradually started grazing their way up the hill towards me. This is the quick line sketch I did of one of them:

On Friday, it was hard not to get caught up in the media coverage following the announcement of Prince Philip’s death at the age of 99.

Now I’m not a staunch royalist but there’s no doubting that he lived a remarkable life that was characterised by his devout service to Queen and country. As I watched the rolling coverage of his life story – I was slightly absent mindedly also looking for some sort of ‘royalty related’ subject matter.

When I came across the reference image for the painting below, it struck a chord with my horse sketch so I thought I’d give it a go!

For a quick study of an unfamiliar subject, I was quite pleased with how this turned out.

I’ve been managing to get a few walks in with my family down on the seafront over Easter. I’ve done quite a few paintings of the promenade here in Hove, very few of which I feel ever do it justice! I’m sad to say that this is another quick painting to fall into that category! I had it in mind to do something different with this painting – especially with the figures and their shadows. In the end however, it all went a bit wrong and ended up being a bit neither one thing or the other – though I do like the tones in the tarmac of the prom!

I’ll come back to this subject again I daresay. I’d like to get at least one painting of this view that I’m happy with!