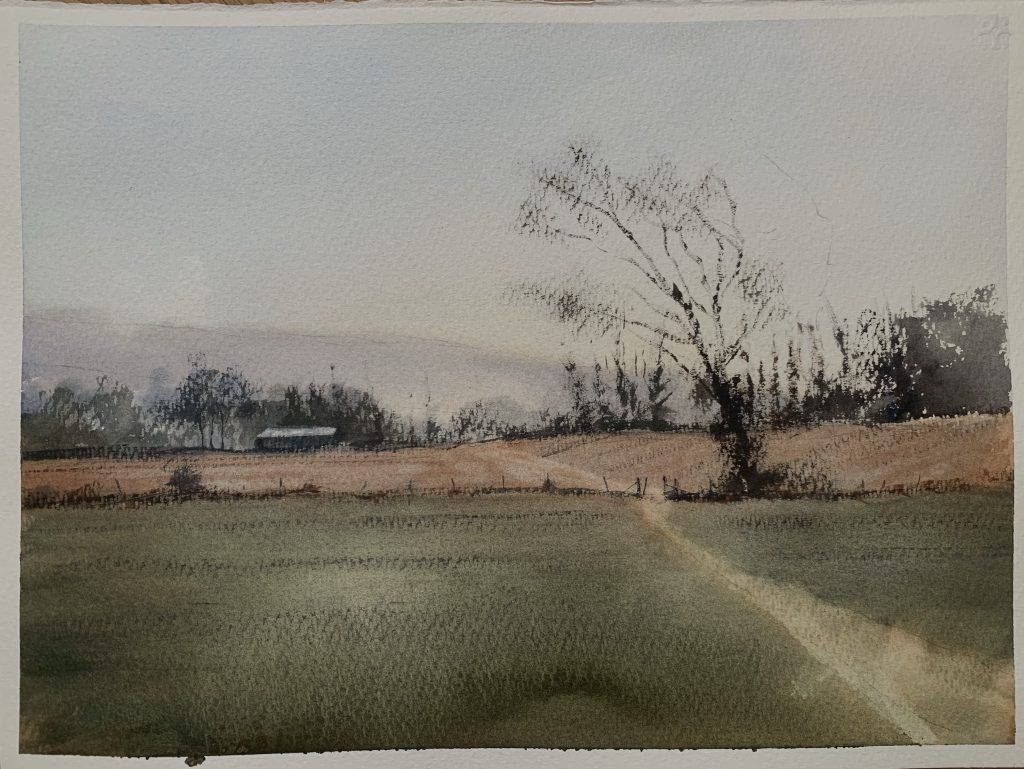 It was great to have the opportunity over Easter to combine a bit of DIY with some watercolour painting!

A while ago, I picked up a new easel the the express intention of dismantling it and using it to make a customisation to my existing plein air set up.

Here’s the easel I bought:

I picked this up on eBay for less than £10. It didn’t have any make identified on it but I really like it’s construction, especially the nurled adjustment nuts.

I knew exactly what I wanted to do with this, but wasn’t 100% sure if I could do it or not! The main challenge was how to adapt this easel in such a way I could attach it to my existing set up.

First up was to take my grinder to the bracket, pre drill some holes to match those that I’d already made on a tripod mount plate and then use some self tapping screws to secure the two together.

All well and good in principle, but what I really needed was the opportunity a test this in the field!

It was great that just such an opportunity presented itself! Here then is my newly customised set up in action!

The case itself is an old aluminium oil painters case, originally made by Winsor and Newton. It’s wonderful because it can accommodate paper, a board and a ‘shelf’ that I’ve made along with tubes of paint, brushes, masking tape and water spray. It has room for just about everything except my sandwiches!

The new easel attachment means that I can paint on any sized board up to half imperial, in any orientation, and still be able to quickly take the board off to tilt, shake (or hide it from prying eyes!). Previously, I had to use the camera mount plates on each of my boards and once secured, it was a bit of a fiddle to remove the board.

I posted some similar images on Instagram and had someone enquire about the weight of this. I had no idea but knew that I needed to find out! Empty, and excluding the tripod, this box and easel attachment comes in at 5lbs. Fully loaded with paints, brushes and all the other paraphernalia, it’s 11lbs. For comparison – and I had to look this up to satisfy my own curiosity – a full size Juilliard box easel comes in at 13.2lbs empty. All in all, I think this compares pretty well weight-wise. It’s not necessarily something that I’d want to take hiking with me, but that was never really in my plans anyway!

The advantage of the new easel attachment is that I can also remove it from this box and just attach it directly to a tripod which would make it super lightweight (but I know that I’d miss my shelf!)

I’m delighted to report that on its first outing, the new set performed really well!

Here’s the painting that I did:

I must admit that I was pleasantly surprised with how well this turned out. I can’t recall the last time I got to paint plein-air like this, but this is without a doubt the most successful of all my plein air efforts.

Probably the most challenging aspect was the light! It was bright, but the light was really diffused. This meant that I really struggled with the brightness of my paper catching the light which made it difficult to work out my values.

I’ve since made a little shade out of some cardboard that should help me on future outings! (I’ll post pictures of this latest addition next time I get out!)

I’ve been continuing my efforts to paint a little more footloose and free! Here’s a selection of some other paintings that I’ve done over a pleasingly productive Easter break!

I quite like the sense of light and the colour harmony in this one. The perspective on the cars is a bit askew but I was quite pleased with the suggestion of the scooter in the foreground.

My favourite elements in this one are the buildings and the dry brush suggestion of the windows and other architectural details. Other parts of this became a little too muddy and overworked.

Now this felt like a real departure! I don’t mind admitting that I found trying to portray waves breaking a real challenge – especially when they’re the focal point of the painting! I was quite pleased that most of this was achieved by keeping the white of of the paper. There are a few splatters and dry brushsrokes of Titanium white on there too – but not as much as it might appear! ,

And to end with, a sea fret at Eastbourne. A sea fret is a particular type of fog that occurs at sea and is then blown onto land. They can often occur when the air is warm and sun bright (hence the shadows here) but the mist has a cold chill to it – and can be quite dense, here is was almost totally obscuring Eastbourne pier which you may just be able to make out in the background.

All of these were painted relatively quickly and I was consciously trying to avoid any sense of preciousness (which is quite tricky as soon as you start trying to do this consciously!). Another thing that i’ve been working on is trying to minimise my preliminary sketching – so that I only have the most essential information on the paper at the outset. It can make it a little more challenging at times during the painting, but I think it’s also allowing for a little more spontaneity and freedom during the process of painting.

All in all, I feel it’s been a most positive and productive week. I hope that others managed to have a similarly enjoyable and rewarding time over the Easter break too!