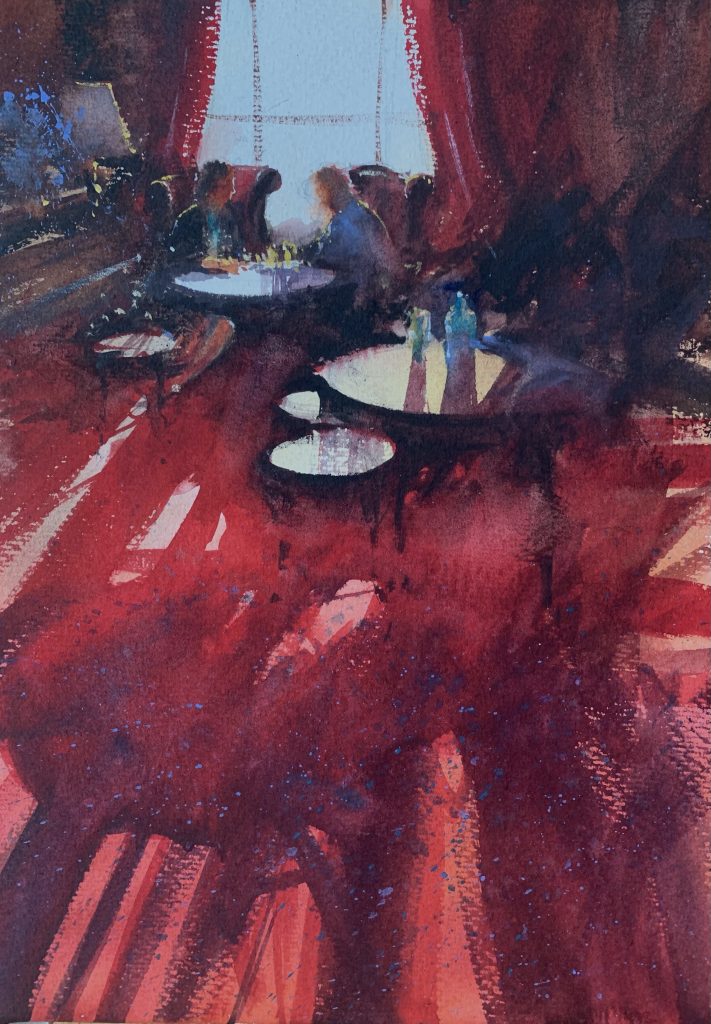 I’m afraid there’s a lot to get through this week so no time for dilly-dallying around with my usual small talk!

My main watercolour painting event of the past week took place on Saturday. This was my third online demonstration that I’ve participated in with Alvaro Castagnet, following previous ones in December and earlier this month, so there was much that I was already familiar with. What attracted me to this particular workshop was the subject matter:

As many of you will know, I really enjoy painting interiors and I was really excited at the prospect of tackling that the bold lighting, strong contrasts and vivid colours of this view. I’m familiar with quite a few of Alvaro Castagnet’s colour saturated images, where a single colour runs throughout the entire painting but the varying intensity of the hues create the sense of light and drama so I was really keen to experience his approach to such a painting in real time.

And I think ‘real time’ is important here. Once this painting started, I barely had time to look at the screen! Alvaro does leave some time at the end of each passage of painting so that participants can either do their painting then or at least have a bit of time to catch up with his progress.

My preference is to try to paint along at as similar a pace as possible. I think I get a bit of a rush from trying to keep up, and that this in turn creates a greater sense of immediacy and urgency in my paintings. This is something that I think I do need to work on, especially when I’m mainly working at home without any constraints on time.

Ahead of the workshop, I’d already sketched out two versions of this view, that I thought might come in handy, and I had another blank sheet all ready to sketch out as Alvaro sketched his out. In the end, the one I did alongside Alvaro is the one that I ended up using. My earlier two had the figures too large, which meant there wasn’t as much foreground area to really go to town with the shadows and lighting.

You can just about about discern the most basic outline sketches beneath this first wash:

Colours used so far were raw seinne, burnt sienna and pyrrol red (which I don’t possess so mine is a mix of cadmium red and Alazirin Crimson). Must confess that it felt exciting and terrifying in equal measure to be using such an intense and vibrant colour!

And I’m afraid that for ‘work in progress’ images, that’s your lot!

From this point in, everything moved at such a pace that it was all I could do to keep up! I was basically listening to Alvaro’s step by step commentary on what he was doing and what colours he was using, glancing up at the screen every now and then, and painting furiously!

This is what Alvaro’s painting looked like when the dust had settled and the paint had dried:

I can’t deny that I was super pleased with how this turned out. As a student, I never fared well under examination conditions and sometimes, trying to paint along in these demonstrations takes me right back the anxiety of my ill prepared for exams!

Yes there are elements that I could maybe have done a little better, but under the circumstances, I think my attempt holds up pretty well alongside Alvaro’s – which is much more than I could have hoped for at the outset!

I think this is the last one of these workshops that I’m going to do now (for a while at least!). His next one will be a floral still life which I’m less inspired by and, cannot really justify the expense of another workshop in such a short time!

Here are the three paintings that I’ve done in the three workshops:

These three workshops have given me so much to think about and to work on. What I need to do now, is spend time trying to really absorb what I’ve learnt, apply it to my own painting and see what sticks, and what doesn’t!

And speaking of applying to what I’ve learnt to other paintings, here’s a quick study that I did before this week’s workshop that turned out much better than what I’d anticipated at the outset!

I’m so pleased with how this turned out. I think in terms of execution, it has a relaxed confidence about it along with a good variety of contrasts, decent colour harmony, some lost and found edges and some dry brushstrokes – all combining effectively to portray a simple play of light.

Conversely, here’s another study that I had high hopes for at the outset, only to be disappointed with the final result!

I rarely paint anything where a figure is so dominant but I liked the contrasts in the original black and white photograph and imagined me painting it in a loose, confident fashion with fast flowing expressive brushstrokes. As it turned out, I painted it tightly, with tentative brushstrokes to produce a rather turgid and stodgy painting.

After the workshop with Alvaro, with so many thoughts and ideas in my head – I was keen to apply some of the principles to another subject to try to cement them in my mind. Here’s a quick street scene.

Not one of my best, but I can detect some good moments in here and, more importantly, I was really thinking throughout this. I had to make a lot of decisions about what to include, change or omit from the original photograph and, while the execution leaves a lot to be desired in some areas (the cars in particular annoy me!) – I’m quite pleased with how this reads.

Still not quite satisfied with my painting lot – I also took to recycling the backs of my (oh SO many) failed paintings to play around with some figure studies. On the past few workshops with Alvaro he’d done a few small figure studies which quite inspired me. I thought that if I can try to do these quick studies, it will really help my figure painting and, more importantly, they’re fun to do. No pressure, just playing about with some brushes and paint.

All in all, it feels like it’s been quite a productive week!

Here’s a little summary, in my own personal order of preference:

No doubt I’ll be returning to a much more sedantry and less prolific output next week!