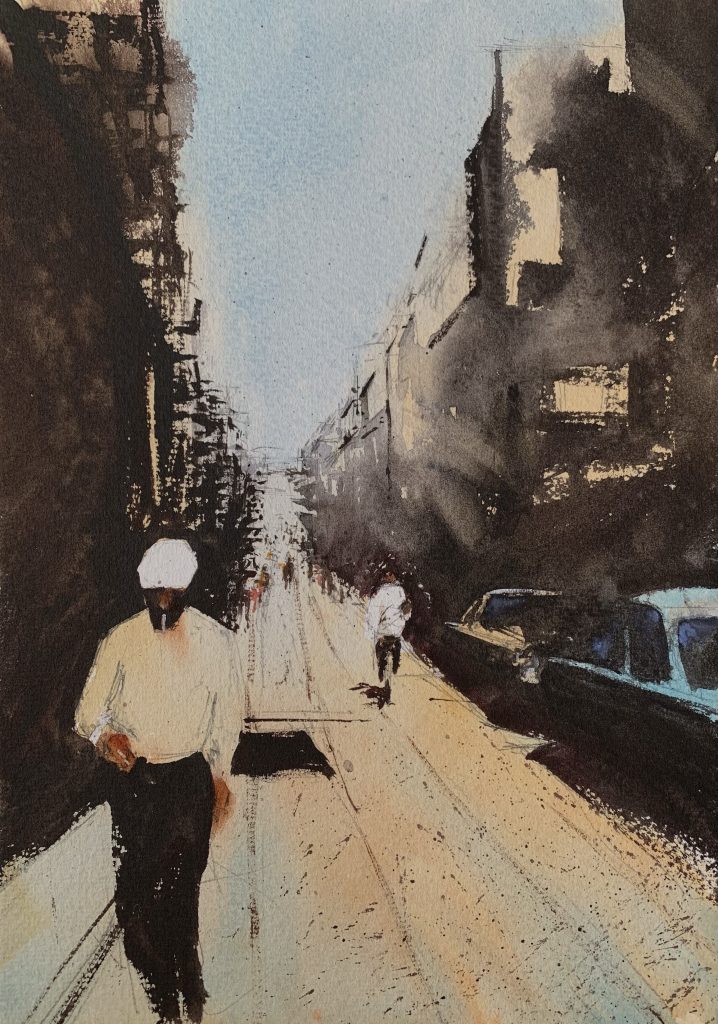 With this at the forefront of mind then, here are a couple of quick paintings!

This first quick study is based on a black and white photo by Swiss photographer René Burri (1933-2014). I was really attracted to the monochrome of photo and the highlights:

When I started painting this, my main intention was to work as quickly and fluidly as possible and throughout, I endeavoured to hold my brushes as near to the top as possible, even when trying to cut around the highlighted areas, to encourage more fluid and expressive brush strokes.

I started off with a base wash of burn sienna, that went pretty much everywhere except for the highlights on the faces and clothes of the figures. On top of this wash, I applied a darker wash using a new addition – Sepia. This was the first time I’ve ever painted with it. I bought it as I thought it might add a different dimension to my darks – some of which I often find I go a little too strong with.

And the finished sketch:

I was quite pleased with how this turned out. From a distance it reads quite well and I was pleased that I was able to resist the temptation to fiddle unnecessarily. As a study, I think it’s the kind of thing I should be trying to do more often. I still think that the brushstrokes, especially when I was trying to carefully cut around shapes and highlights, lack a little energy and expressiveness, but that’s exactly what practising this type of study will help to develop.

I received an ad on Facebook recently from one of Brighton’s many music venues. The ad featured a crop of the iconic Buena Vista Social Club image:

I wasn’t sure why at the time, but I rather absently mindedly saved the image. When I came to looking for some inspiration, I realised why I’d saved it! I think it was because it featured so many elements that are common to Alvaro Castagnet’s images and which are on my mind following the most recent workshop. The strong shadows, bold contrasts and lost and found edges on the cars are all key features in his paintings that I’m also strongly drawn to.

What followed was a quick outline sketch followed by an almost as quick painting! I wasn’t setting out to do a photographic reproduction of this image, more just to use it as a basis for practising the principles of what I’ve been learning.

I started off with light wash of yellow ochre across all of the buildings and the road, being mindful to cut around the hat of the figure in the foreground and, to his right, the figures on a bike. While this was wet, I also added in the sky using a mix of cerulean and cobalt blue. Again, while this wash was still wet, I added in some burnt sienna into the road in the foreground, some cobalt blue for the car on the right, along with some light brushstrokes of cobalt blue into the road, which were all left to diffuse. This was then all left to dry.

In the original image, the tone of the shadows is dark right from the foreground right through to the far distance. I wanted to use a little more variety of tone to help create a greater sense of distance. To help me, I broke out some recent purchases that had just arrived!

I’d decided to treat myself to a tube each of Alvaro’s Caliente and Fresco Greys:

I purchased these two tubes from APV Films as I know they supply some of his brushes too. The Caliente Grey is described as:

…a smooth, warm velvety grey on its own, mixes wonderfully with other colours toning them down and adding warmth

“A terrific hue, very powerful, excellent to create strong and warm paintings. In monochrome this wonderful Grey is perfect to achieve a powerful atmosphere with amazing glow. This colour is also perfect to add dramatic highlights and shadows.” Alvaro Castagnet

The Fresco Grey is described as:

…a cool midnight in mass tone and a cooling mist in washes, it mixes well with other colours, toning them down and adding a touch of coolness

“A very powerful and true hue, with no artificial look to it. Passionate and mysterious, great to evoke distant elements of any kind even the unknown…I love the hue.” Alvaro Castagnet

I’ve shown the labels of the paints to share what colours these two greys are comprised of. I already carry most of these colours in my palette (and I already don’t have space in my palette for these new colours!). Theoretically I should be able to mix equivalents to both of these colours with what I already have. I’m hoping however, that having these ‘ready to go’ colours will benefit me in terms of convenience and immediacy.

For anyone interested in learning more about these greys, there’s a lot more information available on this Daniel Smith blogpost which is dedicated to these two colours. The blogpost includes details about the pigments, colour swatches and examples of paintings by Alvaro created using these two different colours.

Back to my painting, however, I started to apply some of the fresco grey to the distant buildings on the right hand side, gradually intensifying the tone as I came towards the foreground. While this was still wet, I started to drop in the dark tones using my new found friend sepia! The cars and their shadows were done in just a few strokes and I was pleased with how these turned out.

The buildings on the left felt altogether darker, and that’s how I treated them, again working from the distant buildings towards the foreground and just trying to indicate the sense of some of the buildings. I had to be a little careful cutting around the figure, and in painting the figure too but by this stage I wasn’t trying to copy the reference image – I was just trying to make the figure work in the painting that had developed.

Once the main figure was in, I just added the suggestion of a few figures in the distance, some directional brushstrokes on the road to lead the eye in and a bit of spattering on the road for some texture and it was all done.

I had fun painting this. Again, I could have fiddled around with this some more, but I doubt it would have improved it any.

It felt good to paint with a sense of urgency, and to put into practice some of the advice and learnings from the most recent workshop. Hopefully these are all things that I can build on and carry forward into future paintings.