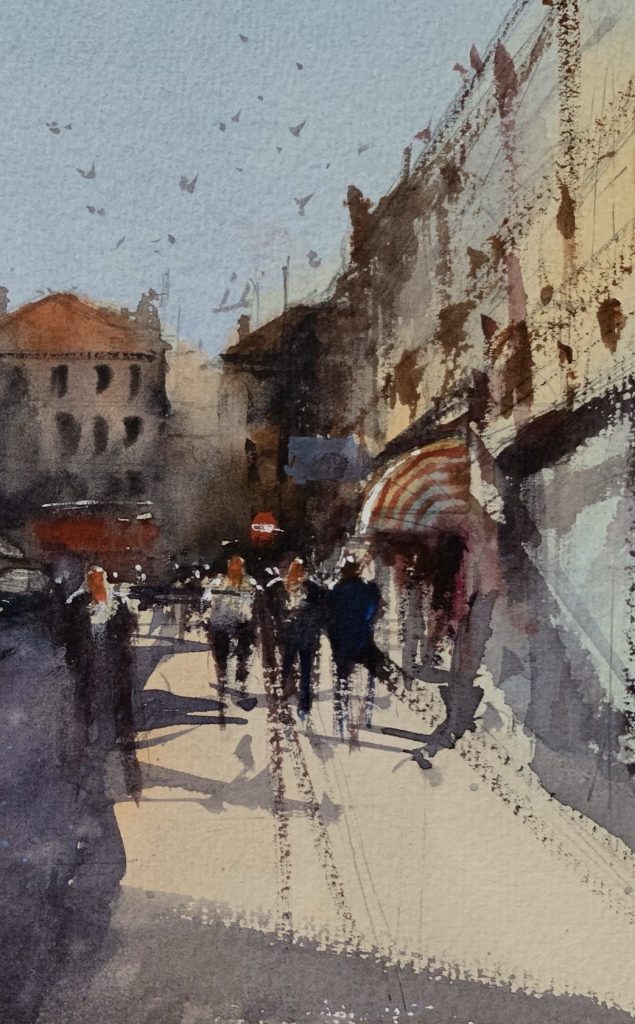 I only booked onto this online watercolour workshop with Alvaro Castagnet last week, so I only had to endure a few days of nervous excitement and anticipation before the event!

Here’s the reference photo that was supplied ahead of the workshop:

Perverse as it may sound, one of the reasons I was keen to do this particular workshop was because I thought this image was much more challenging compared to the one I did in my previous workshop with Alvaro Castagnet. With this image, it wasn’t quite as obvious what direction he might choose to take it in. This is what was most interesting to me, the considerations and decisions that he would make when making a composition from this image.

So. Here’s me all set up and ready to go. The workshop started at 7.30pm on Friday night – so in addition to my usual palette, paints, brushes and water spray, I had a little glass of vino-tinto on the go too. I was determined to enjoy myself even if I didn’t feel convinced by the subject matter (oh how I would come to regret this!)

Even though I expected a lot of changes to be made based on the source photo, I did still think that it was worth starting off with some of the key elements at least put into place. Here you can see the sketched outline that I’d pre-prepared. This was mainly about placing in the perspective lines, anticipating that cars and figures etc would be moved about a little.

Up to this point, ie pretty much right up until the start of the workshop – so far so good!

From the point at which the workshop started however, things started to spiral out of control a little as my computer developed a glitch and I completely lost the sound!

What followed was a great deal of teeth gnashing and cursing while I simultaneously tried to keep up with what I could see Alvaro doing while also trying crawling around on my hands and knees trying to sort out my IT woes on my laptop!

This is when I started to regret the wine! I really couldn’t work out what on earth was wrong with my sound and I was so annoyed and frustrated that I was missing out on the crucial elements that I was most interested in learning about! (Not to mention feeling that I’d just wasted a not inconsiderable amount of money on this workshop!)

Soundless, I pressed on as best I could.

As well as having my pre-prepared sketch, I also had another board ready with a blank piece of paper so that I could try to sketch it out from the start while Alvaro mapped out his painting too.

Onto these areas were placed just key details, and ever so loosely indicated. I’d loved to have known what he was saying at this point but sadly, all I could do was follow along and try to keep up.

The outcome of this was that I ditched my ‘pre-prepared’ sketch in favour of the follow along sketch that I did.

Unfortunately, the circumstances of this workshop (trying to paint along without any sound and, in any gaps desperately trying to fix the sound!) meant that I was unable to take any work in progress shots as I did last time.

Because of this, I’m afraid I have to cut straight to the chase and present my finished painting from the workshop:

I think some of the main differences that stand out to me looking at this is the freshness of Alvaro’s painting compared to mine and a far greater degree of subtlety to the colour mixes and the brushtrokes. I would have liked to have introduced more variety into the dark shadow in the foreground but, during the demo, this part of the screen was covered up by an alert on my screen so I didn’t actually see what he did here, hence me going dark all the way!

Looking at the two side by side, however, I think there are a lot of positives I can take from this experience. I think the area around the awning and the figures on my painting hold up ok. I think the area that I’m least pleased with is my treatment of the buildings on the left which feel overly heavy in tone and in execution.

As I had already had another pre-prepared sketch, I was really keen to tackle this again but perhaps at a more leisurely pace. Here’s how I got on second time around:

It’s funny because as I was painting this one, I felt as if I was correcting and improving many of the elements of my first attempt. It was only at the end of painting this (which I did without really referring to Alvaro’s workshop demo), when I put paintings one and two side by side, that for all it’s failings, I still preferred my workshop effort! This is partly because of the circumstances under which I painted it, but also because I think the figures are better, and I think the strength of the darks and the contrast with the lights, make for a more dynamic painting.

Although I had more time on the second painting, the first one remains, I think, the more powerful of the two. I think the urgency that comes from working to time constraints encourages a fresher and more energetic execution.

All of this is very subjective however, and largely based on how closely I’m bound up in both of these paintings. It would be interesting to hear whether others agree with me or not!

After what felt like a bit of debacle for me, in terms of my sound packing up and trying to struggle along as best I could just imaging what advice Alvaro might be offering, I was pretty determined that I wouldn’t be doing another workshop like this for a good while.

That was before I found out what the next workshop will be!

So, as much as I can ill-afford it, I also can’t resist it! His next online workshop, Glowing Interiors will be on Saturday 27th March at 3.30pm GMT.

Here’s the reference image that we’ll be working from, and I’m sure anyone familiar with my paintings will understand why this is so appealing to me!

At least I’ve got a few weeks to make sure I’ve sorted out my sound settings, and it already feels good to have another workshop to look forward to!