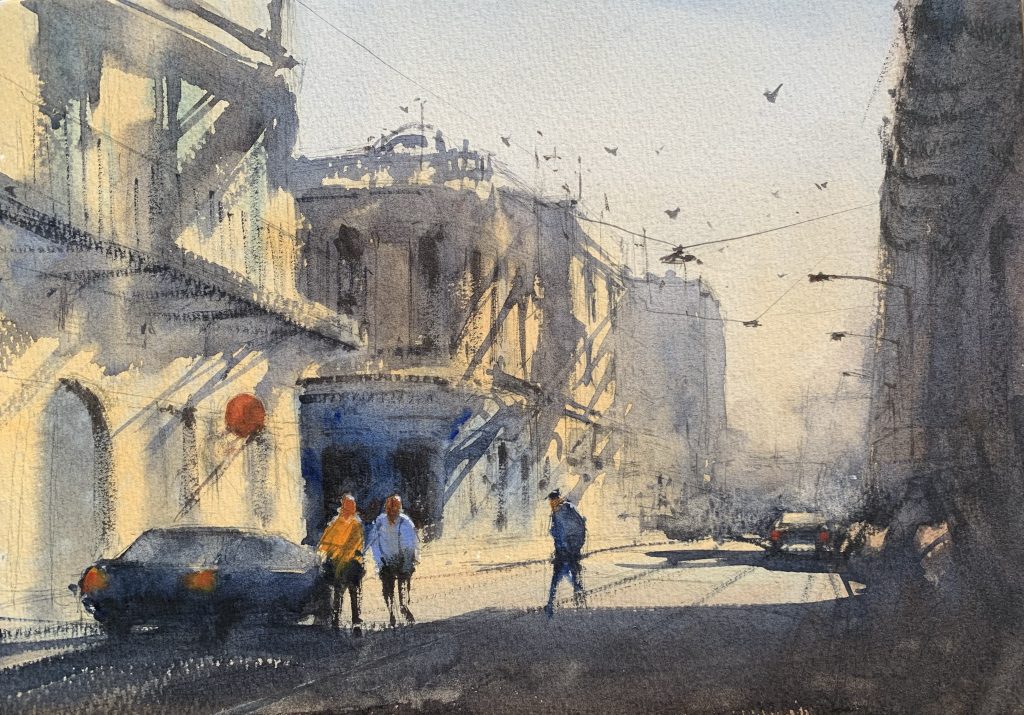 This was my first ever online watercolour workshop so it was a particularly novel experience for me. The workshop wasn’t scheduled to start until 10.00am GMT so I had plenty of time to get myself set up. It wasn’t necessarily the most ideal or elegant of setups, but I figured it would serve sufficiently well for this occasion:

As you can see, I basically had my plein-air set up in front of my home office space, with the addition of a daylight lamp! The main thing for me was that this is a set up I’m familiar with and, crucially, that I could paint standing up! I had deliberated about whether to paint on a half sheet or a quarter sheet and, thinking that it would be generally quicker, I decided to go for the quarter sheet onto which I’d sketched out the basic scene.

I knew that Alvaro would make some changes to this scene, but thought I’d be able to respond to any changes more quickly if I already had the main elements in place.

Although the workshop was scheduled to start at 10am – participants were allowed to join from 9.30am to settle in and say ‘hello’ to each other. This mainly involved lots of people saying ‘hi’ and what time it was in their country. This did serve to show the global nature of the event – with participants in the UK, US, Poland, India, Finland, Australia and New Zealand to name only some that I can remember. I think there were about 40 or so participants in total

Alvaro delivered the workshop from his home in Montevideo in Uruguay. I was a little concerned at first when Alvaro confessed that it was 7.00am in Montevideo – about an hour before he usually rises, so he was still feeling a little groggy and in need of a coffee or two!

The workshop began with a run through of the colours in his palette and some explanations behind his choices. This already rang the odd alarm bell with me! The recommended palette had been sent through in advance but I figured I’d just work with my usual palette. So, for instance where Alvaro has Yellow Ochre, I have Raw Sienna, and for where Alvaro has some of his own specially designed greys with Daniel Smith – I knew that I’d be having to mix mine up as we went along which I thought could prove a little tricky and may have meant that I would lose some time! It’s always interesting to listen to artists you admire talk about their choices, why they prefer one colour over another and how they utilise them to best effect.

After this, Alvaro started sketching out the scene, and straight away you’re aware of the gulf in ability and experience! It can often take me a while to draw something out and to see someone do it so quickly and economically is both a treat and quite daunting! I was really glad I’d already done a basic version of it in advance!

The main change to the reference photo was the addition of the figures. Alvaro wanted to convey the idea of two people stood talking next to the car while another person was crossing the street, maybe to join them. I know from watching other instructional videos about the importance of joining up and connecting shapes and compositional elements, and all of these figures were to be connected to the foreground shadow.

No sooner was the sketch done and we were off onto stage one.

First off, the paper was dampened all over with little water spray before quickly applying the underlying wash. What was most interesting to me during this phase was the need to keep an eye across the dampness of the paper at all times, so that you can return to say the windows and drop in an indication of them that would still give form but also have diffused edges.

I tried to follow Alvaro’s palette where I could – but this wasn’t always possible so I had to mix my own variations up in a few places. Here’s how it looked at the end of this first stage:

At this point, there was a 10- 12 minute break so people that had been watching rather than painting along had the time to apply this wash. I took the opportunity to get the hairdryer out and get my paper completely dry and ready for the next stage.

I’m usually more familiar with the idea of working from light to dark, and from the background to the foreground. In this instance, however, Alvaro worked from left to right, beginning with the building on the left-hand side, then working along the street towards the vanishing point, and then onto the right-hand side of the painting.

I was able to keep up for the first few minutes but then I gradually began to fall behind and was just listening to Alvaro talk while I tried to take on board what he was saying and try to apply it as and when I got to the relevant stage in the painting. Again, this is where the years of experience and skill come into sharp focus! The fluidity, immediacy and confidence of his brushstrokes were a joy to watch… even though half the time I was only able to listen!

By this point, it was all becoming a little bit of a blur to me, so much so I didn’t manage to get a photograph of my painting at this same stage!

The things that I do recall however was the importance of joining and connecting shapes and shadows, creating interest through the variety of brushstrokes, using the spray as necessary to diffuse any edges that were too harsh and muting the colour and tone to create the illusion of depth.

This stage moved seamlessly on from stage two and involved first working on the foreground to bring in the dark foreground shadow, making it darker on the bottom right and finishing lighter towards the left-hand side of the painting where Alvaro wanted us to try to have some more energetic dry brush strokes to add a little more dynamism to this section.

It was around about this point – so pretty early on! – that I started to fall slightly behind yet again! I was listening much more than I was watching as my focus was mainly on what I was doing in my own painting! One interesting aspect was that after laying in the foreground shadow, Alvaro added just the legs of the figures first before working on the rest of them. I’ve seen him paint before on DVDs etc so know that this isn’t always how he does them, but it felt a bit strange to me to paint from the legs up!

From this point on, as Alvaro was busy bringing the finishing touches to his painting, with the overhead lights, lamposts, birds in the sky etc.

I felt like a little kid having to run to keep up with their parents as they strode on ahead! I was however listening throughout and trying to take on board the more salient points or considerations that he was deliberating on.

This is Alvaro’s finished demonstration painting:

And this is my attempt at keeping up:

I knew that there were some elements of this that weren’t as successful as I’d have liked them to have been, and it’s hard for me now to look at this in direct comparison to Alvaro’s version however, overall I was really pleased how this turned out under workshop/running to keep up conditions.

At the end of the demonstration, there was time allowed for anyone that wanted to share their work, by holding it up to the camera so that everyone could see it, and receive a mini critique from Alvaro. He made it clear out the outset of this session that he’d be looking at things that we could focus on to improve our paintings in the future.

I wasn’t sure whether there would be time to do this for everyone, plus I thought I’d prefer to try to get it over and done with early so I didn’t get put off from doing it at all after seeing everyone else’s work; so I volunteered as quickly as I could!

Not so quickly however that I couldn’t get my phone set up to record Alvaro’s comments for posterity! I’m so pleased to be able to share my school report with you:

I’m delighted that I have this recording! I know it’s not a big deal in the grand scheme of things, but to hear an artist I admire saying things like ‘look how good you are’ and joking that my figures were better than his! – well it’s just so encouraging for me and a real boost to my spirits and confidence!

I also listened to all the other feedback too and it was especially nice to recognise a few readers of this blog showing their work and receiving their feedback too. I was struck by how he was able to be simultaneously concise, encouraging and constructive to everyone which I think is a real skill, honed no doubt from many years of demonstrations and workshops!

This is my painting again, after I’d made a few adjustments following the feedback to strengthen the car, soften the gradation of the wash in the distance and add a few directional brushstrokes onto the road to lead the eye through.

I still think that the treatment of the car on the left is the weakest area of this painting but that aside, I’m pretty pleased with how this turned out.

Here for another comparison is this workshop version compared to the practice painting I did last week:

I really enjoyed this entire experience, particularly because I found it to be such an affirming one. It felt good to be able to recognise and appreciate that, although it sometimes feels like two steps forward and one step backwards, progress is being made!

Even though I have a few instructional DVDs by the likes of Alvaro Castagnet, Joseph Zbukvic and Herman Pekel, I did enjoy being part of this live demo. Did I learn much that I didn’t already know? Yes, I think I did, but maybe this was also about trying to demonstrate that I can apply at least some of what I’ve learned too!

Alvaro’s Watercolour Masterclass in Cambridge has now been re-scheduled from 2020 to a weekend in May 2021, and my booking has also been transferred.

Attending this online workshop has only served to further whet my appetite! All I can do now is to keep my fingers crossed that this is still able to go ahead, and of course to keep on painting.