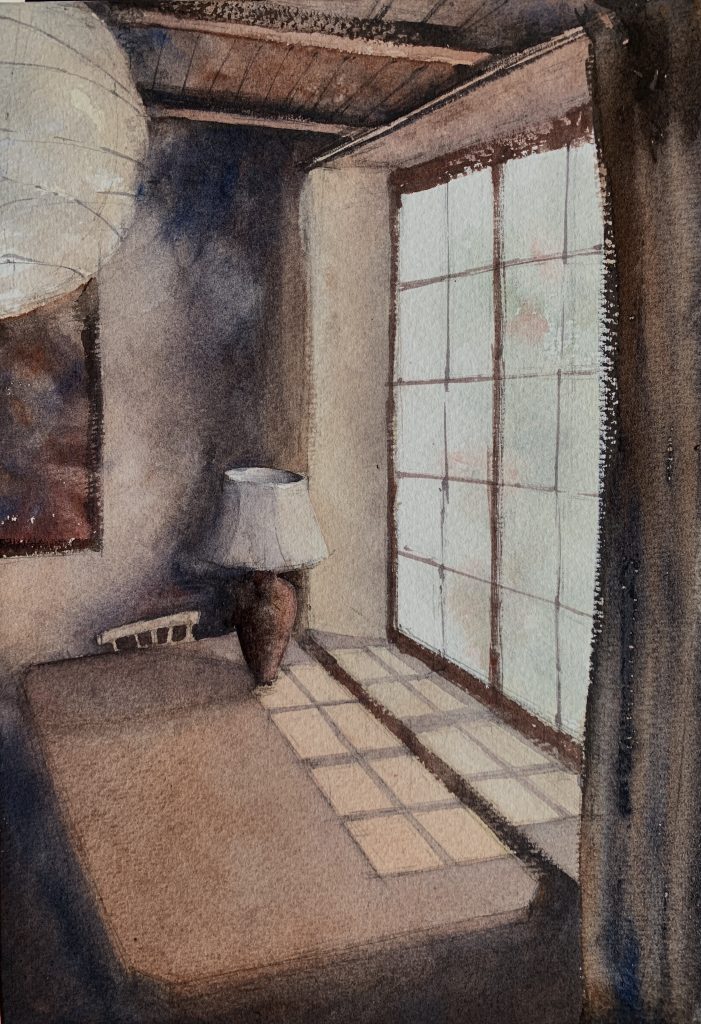 I was ticked of by someone on twitter last week when I posted my watercolour painting here based on a photograph by Fan Ho. The commentator was kind enough to acknowledge their appreciation of the painting, but felt that I should not be using other people’s images for inspiration.

I’m happy to defend my use of other people’s images as sources of inspiration, especially in these most unusual of times when I haven’t been able to seek out my own inspiration during lock-down. I’ve also enjoyed the conversations and exchanges that I’ve had with people when I’ve made contact with them to seek their permission to paint or publish a painting based on their photographs.

Is it being truly authentic and original? No, but nor do I try to pass something off as being ‘truly original’ when it isn’t. I also expressed my view that when my time is so pressured – as it is now more than ever – if the choice I have to make is between resorting to inspiration from elsewhere, or not painting at all, then I’m afraid pure originality sometimes has to come second.

I know that this can be a touchy subject for many.

My personal belief is that we need to lighten up a little! Creativity and inspiration can ebb and flow for all of us. Copying from other artists – or learning as I like to think of it – has served the creative development of artists far more accomplished than I’ll ever be for centuries. For me, what’s important is the time I spend painting. Every time I paint, I’m learning. Sometimes learning something new, sometimes reinforcing something that I’ve already learnt, enabling me to be more adept, more fluid, even confident. What I’m trying to be is consistent in my dedication to painting – whether I feel like it or not – whether I’m working from my own inspiration or, from time to time, leaning on someone elses.

Writing this reminds me of a conversation I had with someone a while back. I was exhibiting my work at a local art fair. I was asked if I worked from photographs or from life. I explained that, primarily due to circumstances – that I usually painted from photographs. The person said that their personal art tutor was of the view that if you don’t work from life, then there’s no point doing it at all.

I can still recall how utterly flabbergasted I was at this. That someone would deny people the pleasure and joy to be had from investing time in being creative based on some self righteous pompous aesthetic snobbery.

Now, despite all of this, my exchange on twitter obviously niggled me as I went scurrying back through my reference material to see if I could find something that I may previously have missed or overlooked.

In 2011, we stayed in a wonderful cottage in France for our summer holiday. The cottage was owned by the parents of a dear friend. The holiday was notable for a number of reasons. For one, it was the first time in many years that I’d spend my ‘main holiday’ under a a proper roof rather than in a tent. For the record, it’s also the last time that our main summer holiday was spent under a a proper roof too!

The primary reason for this choice was that my partner was 6 months pregnant and, understandably didn’t relish the prospect of sleeping on the floor for a few weeks!

So it was that we found ourselves in my friend’s parents’ delightful cottage in Normandy. The cottage is quintessentially French with a distinctly rustic feel to it.

I took the reference photo for this soon after mid day, when the sun was high and the shadows short. I was struck by the sense of light and some lovely moments of contrast. The house has a natural colour palette of pale ochres and warm browns from it’s white washed plaster walls and natural wooden features which I was keen to bring to the fore.

Aside from the drying time, this was painted pretty quickly. I was pleased with how it turned out and it really did transport me right back into the cottage.

I shared this with my friend who recognised it instantly, and who subsequently asked whether it was for sale as it would make a wonderful gift for her parents.

As much as I liked this painting, I did also feel that there were perhaps a few things that I could improve on. I felt duty bound then to give this another go.

On this occasion I’m not going to go into any detailed comparison of these two paintings. The reason is that seeing the two paintings here will be the first time that my friend will have the opportunity to see them together.

Hopefully, in the fullness of time, one of these paintings will grace the home of my friend’s parents – and I can only hope that it serves as reminder of wonderful times spent in their beautiful cottage in France.

While I’m going withold, for the time being at least, on which is my favourite of these two, I’m sure my friend wouldn’t mind you sharing your thoughts, views and recommendations on these two genuinely authentic originals!

As well as being notable for holidaying under a roof, 2011 was also notable for the birth of our wonderful daughter and, a mere 5 days later, the birth of this blog! My very first post featured a watercolour that was based on a plein-air sketch that I did while on this very holiday!

After a few further posts in November 2011, I didn’t post again until 2014! Who was I trying to kid about ‘having a child won’t change my life’!

I think it’s fair to say that it’s been a long road, and I’m sure that many would also say that I haven’t actually managed to make that much progress along it considering how long I’ve been travelling it!