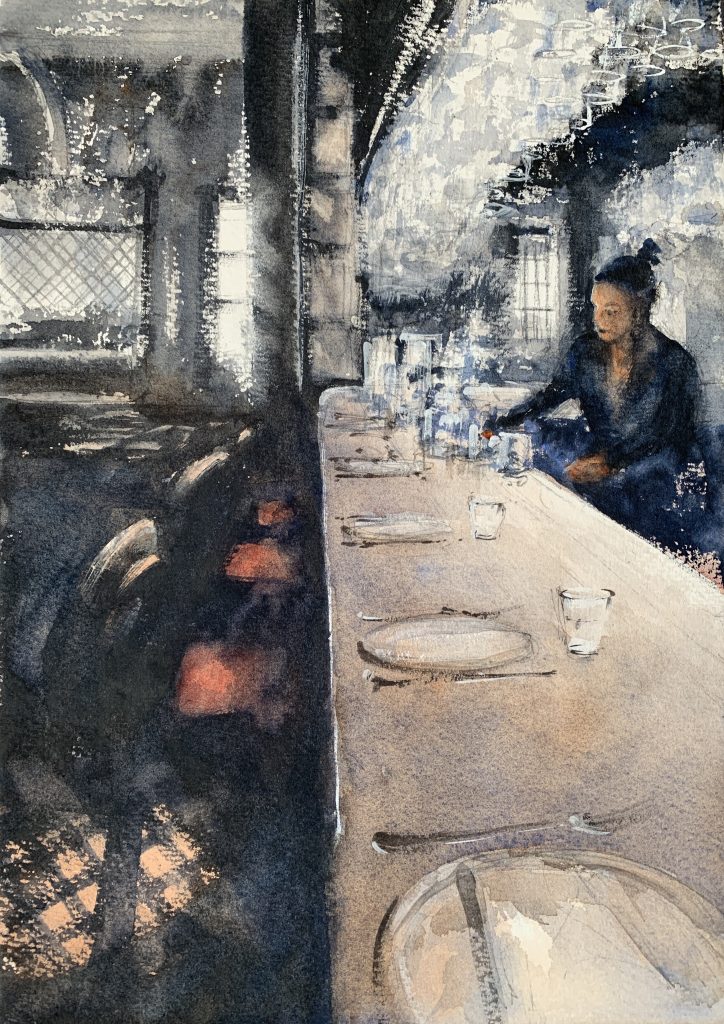 After last week’s watercolour painting I was in two minds about whether to tackle this subject again. After reasoning to myself that there were good elements to try to replicate, and other areas to try to improve on, I decided to have another go, but this time from a marginally different angle.

To start with, here’s a black and print out of my reference photo, which I’d already tinkered with to heighten the contrasts, alongside a version of the same photo that I’d played around with, mainly using and smudging a white gel pen.

And for comparison, here’s last week’s and this week’s paintings side by side:

If I had done this second painting without having done the first one, I think I’d probably be pretty pleased with it. As it is, I can only go so far as liking some elements of it compared to the first one. Overall the first one remains, to my mind, the most satisfying of the two.

The areas that I do like on the second one tend to be the supporting elements. I like the indication of some of the background features, especially the sense of light coming into the rooms at the rear. I do also prefer the treatment of the figure. While the lit glasses above the bar are okay in the second one, they’re much more of a successful feature in the first painting.

There’s something about the composition of the second one that I originally thought was intriguing; the way that the image is split almost vertically down the middle with dark to the left and light to the right. The more I look at it however, the more it jars with me.

None of this is to say that I didn’t enjoy painting it. In fact, I think I probably had more fun painting this one than the first, and I do still like the feel and energy of it. Much of this second painting was done with a brush I bought a long time ago – a Da Vinci Series 5535 Top Mix B, but have used rather infrequently. After this outing, I think I will probably be using it a lot more.

Once again I was trying as much as possible to hold the brush high up the handle to avoid too much tightness and to allow for, or encourage, more expressive mark making. And while my use of colour in this painting still falls a long way short of what some may like to see, I’m quite happy with the touches of colour that I think add much more warmth than the first while still maintaining a strong colour harmony.

Looking back over previous posts, I did mention these brushes almost exactly a year ago. There’s still not a lot of information online about these brushes but they come in three sizes, 16, 20 and 24 and are made from a combination of natural and synthetic hairs. They’re supposedly longer than most equivalent brushes, with more resilient tips.

From my experience, the 20 and 24 are good for paintings of half sheet upwards (they’re massive!) but the size 16 can work well on quarter imperial sheets upwards.

They do take a little getting used to but I think it’s time well spent.

I wrote much of this post whilst simultaneously trying to keep up with a programme that I inadvertently stumbled across: Life Drawing Live on BBC 4. It’s probably easier for UK residents to access than those overseas but, if you are able to access it, it’s well worth a watch – if only to remind oneself of the immense challenges of life drawing!