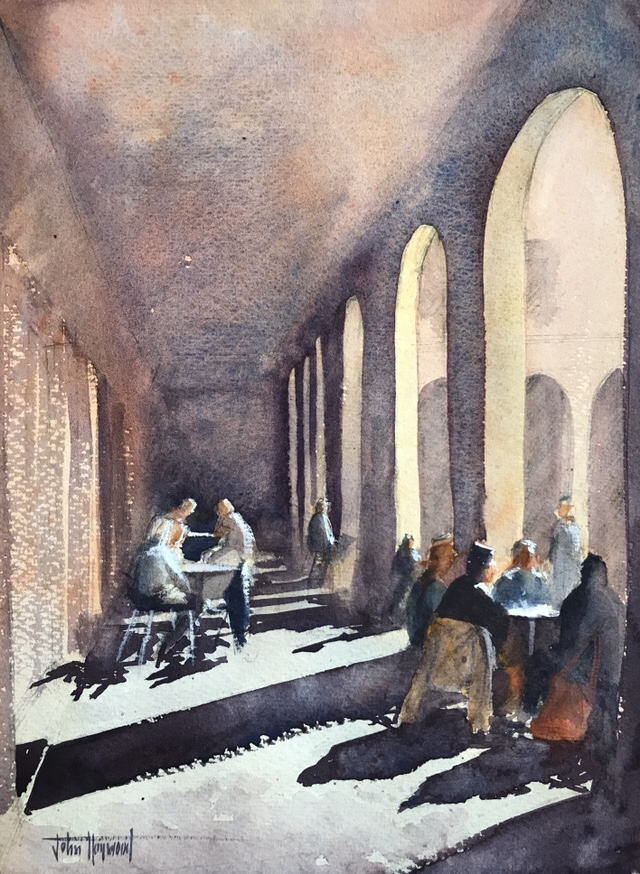 Well I’m just going to launch straight in with the big news of the week, which is that in a most surprising turn of events I find myself booked on to a two-day masterclass in May with the world-renowned watercolour artist Alvaro Castagnet!

It was my birthday over the weekend, something that usually receives no more than a cursory nod of acknowledgement, the likes of which you might give to an old acquaintance across the street while you struggle to remember how you ever knew each other!

One of my gifts this year was ‘a weekend away on my own somewhere so I could paint at will, with accommodation covered’. This soon morphed into me exploring art courses and then serendipity took over. I’d recently read a few reviews by people that have attended Alvaro Castagnet workshops – such as on the excellent Watercolor Sketching website and blog – which features some great images – and on the Art Dragon blog and these were obviously at the forefront of my mind. I knew that he was going to be in the UK in May, as part of the International Watercolour Masters 2020 which runs from the 5th-15th May, but I’d also read that most of the workshops for this event had sold out.

I looked up ‘Alvaro Castagnet workshops UK 2020’ and eventually tracked down details of a two-day Masterclass on the 16th and 17th May on the outskirts of Cambridge. After a quick email to the organiser, artist Vandy Massey to enquire whether there was any availability, more in hope than expectation, Vandy confirmed straight away that there were still a few spaces available and I booked without any further hesitation! Should anyone else be interested, I’d book asap if I were you – here’s where you can find out more and reserve your place.

Even though I have one of his books and a number of his DVDs, I’m really excited at the prospect of seeing such a brilliant artist paint in person. For anyone that isn’t familiar with his work, below are a selection of examples from my Alvaro Castagnet board on Pinterest:

And for anyone that wants to watch him paint without having to buy a DVD first, here’s an episode of ‘Colour in Your life’ featuring an interview and demonstration with Alvaro Castagnet:

You can also listen to an extensive interview with Alvaro Castagnet on Eric Rhoads’ great series of Plein Air podcasts:

Hopefully, all of this will give you a sense of why I’m so excited to have a place on this masterclass!

It’s also great to have something as good as this to look forward to! It reminds me quite a lot of 2016 when my birthday present was a five-day plein-air painting course with Edward Wesson expert Steve Hall. It was working towards this workshop that really helped to kick-start my painting – and I’m hoping that painting towards this new learning milestone will have a similar effect.

Now then onto more comparatively prosaic matters – that of my painting. Even before the Alvaro Castagnet workshop was a twinkling in my eye, I’d already decided on my subject matter, but the subsequent knowledge of the workshop booking did undoubtedly affect how I executed it!

The scene I’d selected was one form Barcelona that I painted a number of years ago, albeit from the opposite angle. Here’s that ‘first’ painting:

This view was of the same covered colonnade, but from the darker end and here’s a black and white image of the view:

Before diving straight in with a painting, as per my usual approach, I decided to spend a little time exploring the image and was also keen to have a play around with my Copic grey tone markers. Here’s the quick study that I did with the Copic pens, where I was trying to simplify the image a little and pull out the elements that I thought should be focussed on.

I enjoyed building this little sketch up, however, as I was doing it, and thinking how I might translate this into watercolour, I was a little troubled by how dark much of the original image was.

On another black and white print out, I used my white gel pen to accentuate some of the highlights and to bring more light into the image. I was surprised by how well this worked. Even just scribbling some white gel pen on and then smudging it with my finger gave the image a much more ‘painterly’ quality.

Here’s the original black and white image alongside my ‘customised version’:

Happy with my little sketch and modified image I sketched out my painting on a stretched sheet of quarter imperial:

In keeping with the monochrome image, and sketches, I was keen to work with a limited palette, and decided in advance to paint using only French ultramarine and burnt sienna, allowing myself the option of adding in any highlights with a little titanium white at the end! Here’s how I got on:

Even with just this faint first wash it was nice to feel the painting coming together. At this stage I should point out that I was painting in the knowledge that I’d secured a place on the masterclass – and was quite consciously reminding myself of some of the things that I’ve learned and observed from watching some of Alaro Castagnet’s DVDs. The main thing I was trying to concentrate on was holding the brush high up the handle to encourage looser more expressive brushstrokes, even if it comes and the price of a loss of accuracy! Once the bright whiteness of the paper had been tackled, it was time for some strengthening of the dark areas.

Having tackled the main architectural elements – which felt like a safe environment for practising my brushstrokes – it was time to move into the figures.

I started with the figures in the distance and worked forwards, trying my best not to fuss, and being mindful of trying to join shapes and elements together while keeping an eye on the key areas of greatest contrast. I was also trying to work fluidly and with a degree of speed. Here’s how it looked when I thought it was time to stop, stand back and reassess:

Overall, I was pretty happy with the way this was looking. Next up was my tube of titanium white to add in a few highlights here and there. For some of the very densely painted areas, such as the foreground, I also re-wetted this and took a bit of kitchen towel to it to smudge out the odd mark, in a similar way as I had when adding in some lights with a gel pen to the black and white photo.

I think these final touches (and subtractions!) add a degree of variety and interest. I can’t deny that I’m pleased with how this turned out. I think it has a liveliness and energy about it that I often have a tendency to lose through overworking. Even though it’s painted with darks, it still carries a strong sense of light and is much more atmospheric than it is photographic.

All in all, it feels like a good painting to start the year off with and I hope it’s a foretaste of what lies ahead!