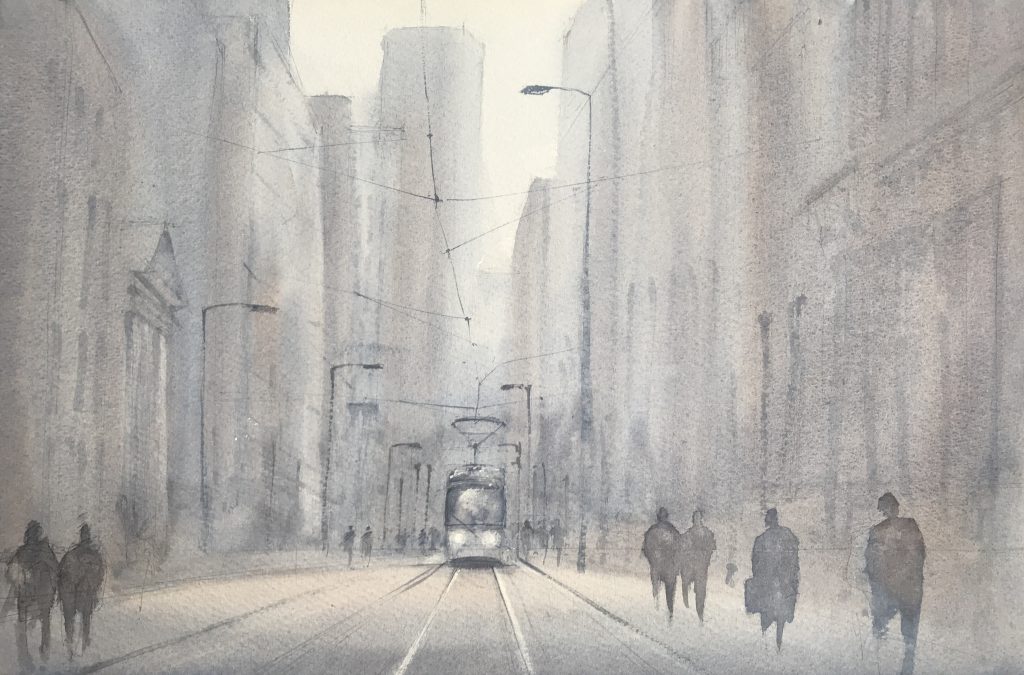 I recently came across a photograph of a view in Manchester that I saw almost instantly as a watercolour painting. This does happen every now and then but more often than not I have to look at a photo and try to work out how I would paint it, which is a much more conscious approach than intuitively seeing something as a painting.

That said, very little that follows from here on looks anything like what I ‘saw’ in my mind’s eye!

The view is a Manchester cityscape. What struck me about it was all the verticals of the various high rises. The view was largely monochromatic but there was colour, especially in the reflected windows. Following how effective last week’s use of a light colour under-wash, I thought a similar treatment might work here, over which I intended to apply the darker greys. I also was had it in mind to keep it loose. Here’s how I got on.

To be honest, as much as a liked painting this, there’s not much about it that I like!

This crop focuses in a little more on the areas that I feel best about, however even these areas leave me a bit cold! This wasn’t at all as I imagined it was going to be!

I thought I’d try another version of this, but hopefully learning a little from my first effort. I felt clearer in my mind about what I trying to achieve. In my preparatory sketch, I reduced the size of the tram which gave greater emphasis to the scale and towering height of the surrounding buildings. I also reduced the line of continuous figures on the right hand side.

Instead of laying a wash all over, I started at the top and gradually worked my way down the paper using different intensities of a mix of cobalt blue and light red. This was all done wet in wet, with a focus on developing the verticals but with soft edges.

It was only as I was doing this that I decided to restrict my colour palette to cobalt blue and light red, accepting that I would probably need to add a little touch of titanium white for some of the highlights.

Once the initial wash had dried, there was just the lightest touch of some dry brush strokes to suggest the odd bit of detail on the buildings, and adding in the figures.

Once these were in place, I added in the lamp-posts and the overhead tram wires – and put in the white highlights for the tram’s lights and tracks. What I liked about this is that it has a sense of suggestion and atmosphere.

It’s still not a complete painting, but I think it gives me something that I might pursue a little further on another occasion. The two photos shown above are of exactly the same painting. One photo taken in the morning, the other in the afternoon. The afternoon photo bears the closest colour resemblance to the original.

Hot on the heels of last week’s arrival of David Curtis’s ‘Personal view’ came John Yardley’s ‘Personal View’ from the same Atelier Series. I must confess that there’s a sparkling freshness to his paintings that I think is just wonderful.

Some readers may recall that some year’s ago I wrote about the pleasure I had of seeing John Yardley paint a demo painting, when I took the opportunity to personally express my admiration of his work and to thank him for being such an inspiration.

John Yardley’s approach is so very different to that of David Curtis. Rather than starting with an establishing wash, Yardley prefers to paint directly, getting the colour and tone correct first time with the barest minimum of layering or over painting. I love that when you understand this, you can begin to deconstruct how he may have created each of his paintings – one brushstroke at a time.

I’m really looking forward to spending some time with this book and, hopefully, gleaning some pearls of wisdom.