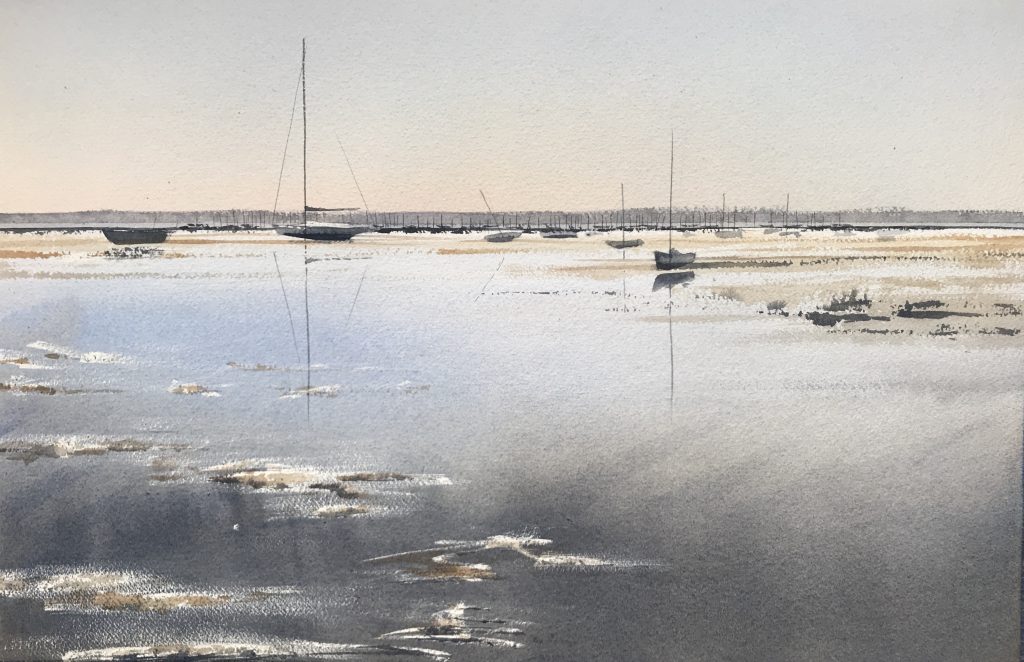 The joy of (watercolour) stretching

While I admit that painting on stretched paper is joyful, I’m still a little shy of investing in special paper stretchers – especially when there’s a more traditional and cheaper alternative. Despite my previous bad experiences of trying to stretch paper, I really don’t like the idea that a piece of paper, some water, a board and some gummed tape can get the better of me!

I decided to tape up a half sheet of some old Arches 140lb Rough that I have lying around. Here’s what it looked like when I was done:

Now I’m sure you don’t me to tell you what a disaster this was! Here’s my best guess at where this attempt went wrong and what I’ve learnt:

In the spirit of waste not want not, I decided that I’d try to make best use of this ‘half stretched’ piece of paper. Following a recent visit to Tate Modern, where I was able to spend some time in the fabulous bookshop (more of this visit in another post sometime!) I subsequently ordered the Tate Watercolour Manual – Lessons from the Great Masters. I haven’t spent much time with it yet but, compared to many ‘how to paint’ books, it appears to feature some really wonderful examples, exercises and insights.

Just for fun, I chose one exercise pretty much at random that I thought would put my vaguely stretched piece of paper to the test. The exercise was to build a scene up from a wet initial wash and to then keep on ‘charging’ parts of it with stronger pigments.

Here’s how it progressed:

I must confess that building this up, without any initial sketching whatsoever was quite invigorating. It’s an approach that allows some of watercolours more exciting and magical traits to shine through which I think is really wonderful. This felt like a great limbering up exercise but I was really keen to get this off my board so I could get another sheet stretched out.

Taking all of what I’d learnt from my first attempt, I’m delighted to report that my second effort was much more successful. I did take a photo to share but despite my unbounded pride at my achievement, no matter how I tried to photograph it, it was ultimately just a flat piece of paper stuck to a board!

My choice of subject this time was another view that I thought would both test and make the most of the stretched paper.  Here’s how it looked at an early stage, with a very simple outline sketch, a little bit of masking fluid dashed across the foreground area, and the sky washed in.

The sky was done by turning the board upside down and applying a pale wash of raw sienna along the horizon line, next to which was applied a pale wash of cadmium red, next to which a wash of cobalt blue. The colours were allowed to run into one another in one direction, and then I turned the board the other way up to allow the colours to run back down again, merging together all the way down as they went.  The reason I’ve gone into some detail about this is mainly because I was really pleased with how this turned out! I also really enjoyed painting this on a stretched surface, which remained perfectly flat throughout despite working with a lot of water.

While this was drying, I painted the shallow water of the foreground, working down the paper and building up the strength of the wash as I went. Next came the distant hills, and some of the thin sandbars near the horizon. I tried to add the boats as simply as possible, often just suggesting the shape with brushstroke.

Next, to break the monotony of all those horizontals, I started to add in the verticals of the masts. This was made much easier by having perfectly flat paper to paint on, all I had to concentrate on was keeping my hand steady!

The foreground water was now completely dry, so I removed the masking fluid that I’d applied at the beginning. I did this to reserve some whites to try to show the light catching on the wet sad protruding through the shallow water. I wasn’t quite sure how I was going to achieve this effect but I thought it would be better to mask this out rather than trying to paint around these areas.

Once this was removed I added in the reflections of the taller masts. Next I loosely applied a colour that I thought approximated with wet sand and put in some darker touches here and there over the reserved areas of white.

I enjoyed painting this, and particularly enjoyed all of the benefits of applying washes to stretched paper!

I quite like the combination of carefully controlled washes combined with the loosely suggested boats. My favourite part of this? (In the unlikely event that it’s been on anyone’s mind!) The sky. I think it has a simple, subtle richness to it that is really evocative of a particular time of day, maybe just before the magical golden hour.

Another piece of paper is already stretched and ready go. I don’t want to jinx anything but I think I’m finally beginning to get the hang of paper stretching!

Thoughts on The joy of (watercolour) stretching

28 thoughts on “The joy of (watercolour) stretching”