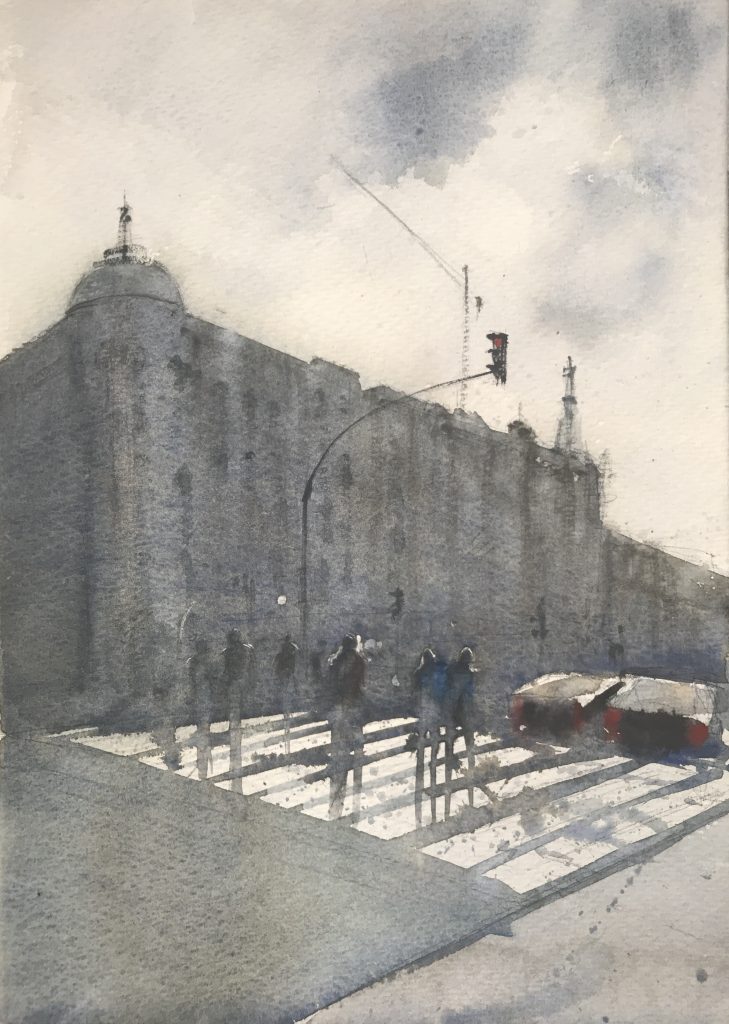 After last weeks post, and some work in progress images of some seriously cockled paper, most of the comments focussed on the pros and cons of stretching paper. Stretching my paper isn’t something I usually do. When I say usually, I mean ever!  The last time I did stretch paper was quite a few years ago, when I was tried out and reviewed Ken Bromley’s Perfect Paper Stretcher. While I recall enjoying painting on stretched paper, I also recalled it being a bit of a faff!

Some of the comments after last week did strike a chord and, despite being a slightly stuck in my ways old curmudgeon, I decided to seek out my paper stretcher, dust it off, and give it another chance. The stretcher that I have is for quarter imperial sized paper. I used my usual 300gsm Saunders Waterford Rough High White paper, which I soaked in the bath for 10 or so minutes before stretching. The principles of the stretcher are great, very simple and super effective. Once the paper has dried, it really is a taught as the proverbial drum skin!

The next hurdle was more of a psychological one than anything practical. Having invested the extra minutes into stretching my paper, and now having a wonderful surface to paint on – surely whatever I paint needs to be absolutely brilliant! This naturally led to a tremendous amount of procrastination while I tried to find a suitable subject matter. Ultimately, my search for the perfect subject matter for a brilliant painting on beautifully stretched paper proved too big an ask. I eventually managed to talk myself round to just painting something and to try to see it as a sketch or experiment. My only criteria now was to choose a subject that I knew would require the paper being very wet.

I came across a photo from our visit to Porto earlier this year – which was, unfortunately, the definition of wet! – which I thought I could perhaps do something with. Here’s how it looked after it was finished and I’d removed it from the stretcher.

And here’s a cropped version:

Leaving the merits of the sketch aside for the moment. Painting on the stretched paper was a joy from start to finish. Although not as wet as I often work, had this been taped using masking tape in my usual fashion, the paper would definitely have cockled some. The stretched paper, however, remained flat as you could imagine throughout. It really was a delight to paint on.

The most frustrating part was when I came to remove the paper from the stretcher. It really does become very attached to the board – especially this weight of paper which I think is the maximum weight of paper recommended for use with the stretcher. In my impatience, I did manage to rip the paper ‘into’ the image which was really frustrating and resulted in a little bit of cussing!

Despite this frustration, I stretched up another sheet and left it to dry while I sought out another image. After my first dark monochromatic sketch, I was keen to focus on something altogether more sunny in outlook.  I found an image from a holiday in Normandy from almost a decade ago now which I thought might be another good test for the stretched paper. Again, no work in progress shots of this one because it all came together pretty quickly and straightforwardly and because I was just focussing on the joy of working on consistently flat paper!

And here’s the cropped version.

So am I now a convert to stretched paper?

Well yes, sort of!  I can’t deny that the experience of painting on stretched paper is much better than painting on unstretched paper. I’d also be lying if I said that I didn’t already have another sheet stretched dried and ready to paint on. I’m trying to come to terms with the excess of paper that I feel is wasted – which I’d say is more than twice as much as when I use masking tape (which for paper miser like myself feels like a lot!), and at some point I may also have to rethink the size of mounts that I cut. None of this, however, is sufficient reason not to stretch paper. In fact I think I’ve already talked myself into buying the half imperial sized perfect paper stretcher!

I’d welcome any thoughts on this subject. Is anyone stretching using the traditional gummed tape method? (if I do order the larger paper stretcher, I think I’ll also order some brown gummed tape too to experiment with!). Does anyone else use the Ken Bromley stretcher? Is anyone else using one of the many other stretchers on the market? I’ve seen a range called the artmate paper stretcher from Swedish brand Keba that look interesting, but I’ve got some reservations about them (aside from just the price!)

Oh, I almost forgot to mention the paintings! I like bits of both of them! I only used the Porto one to head up this post because I thought the title of the post would show up better against it rather than it being a preference. I do like the monochromatic colour scheme of the first one, but on balance, I think the second one is the more successful overall of these two ‘stretched’ sketches.