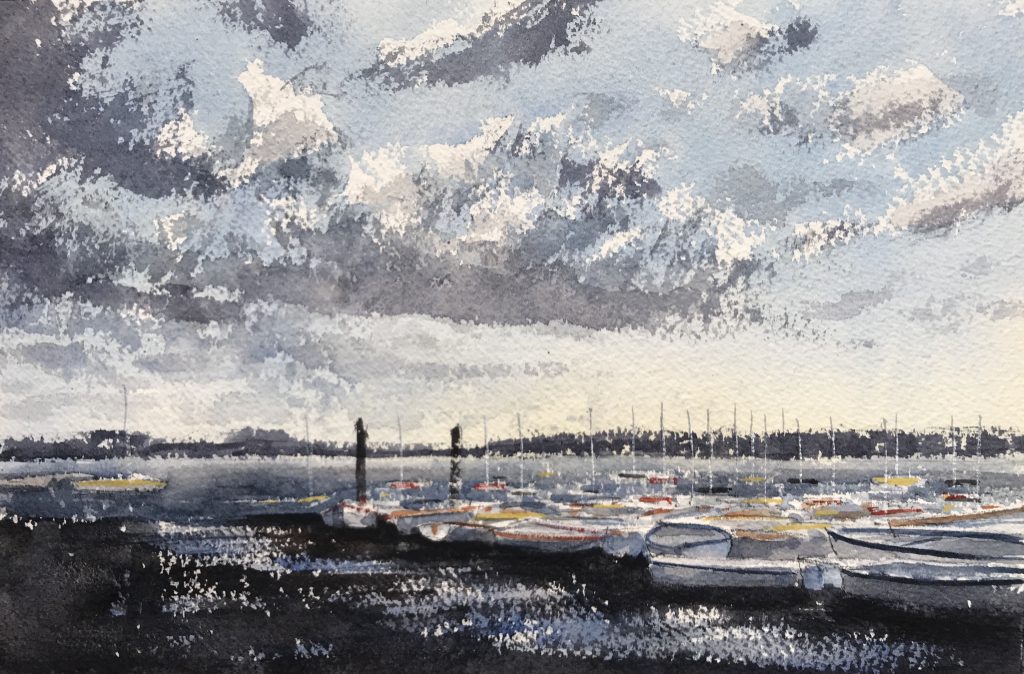 I had reason to trawl back through my photographs the other day in a desperate attempt to win a discussion/argument about where we were, when were we there, and who were we there with, all of which is now clouded in the mists of time (at least in my mind!). Needless to say, I was wrong, but happily so as I stumbled across a few potential photos for paintings that I’d previously overlooked or dismissed.

I recently added to my ‘about’ page a rare photograph of me painting plein air.

I chose to do this because I thought it would be a quick and easy view to paint. While it may have been quick to paint, and it could be argued easy, I certainly don’t want to spend that long looking at it! As it was quick, I might try to paint this view again, but work towards producing something that I’m more satisfied with!

I also came across another view, maybe from about eight or so years ago, from a trip we made down to an area called the Witterings, near Chichester in West Sussex. I can’t recall exactly where this view is, but I thought it had some drama to it!

In contrast to the sketch of Lindisfarne Castle, which I just think feels really limp, I wanted to paint this with greater mix of boldness and sensitivity and, while it’s no masterpiece, I think the brushstrokes do have an economy and an energy about them and I managed to avoid becoming too tight when painting the mass of boats. I’m quite pleased with this one.

Encouraged, and staying on the theme of boats, I tried to apply some of this looseness and energy to a scene of the fishing boats at Hastings. I did a series of half sheet paintings of these boats earlier this year. I was pleased with some of them, but others I felt did become quite tight and overworked. For this sketch, I was working on a much smaller 12 x 8 sheet. As with the Witterings painting, the initial pencil sketch was very loose, and I was keen to try to ‘draw with my brushes’ as much as possible.

Again, for a quickish sketch, I was quite pleased with how this turned out.

What I find quite amusing/interesting are the distinctions that I find myself applying to my own work. For instance, when looking at these last two sketches – despite approaching them both in a similar way, I perceive the two of them very differently. The Witterings one feels to me much more ‘painterly’ than the Hastings sketch, which I think is much more illustrative?

It could just be that the Witterings sketch is more suggestive and impressionistic, the subject matter requiring much less definition, so allowing for more gestural brushstrokes. Now I’m not going to tie myself in knots over this but, as ever, I welcome anyone else’s thoughts and opinions as to the respective merits or otherwise of these two!