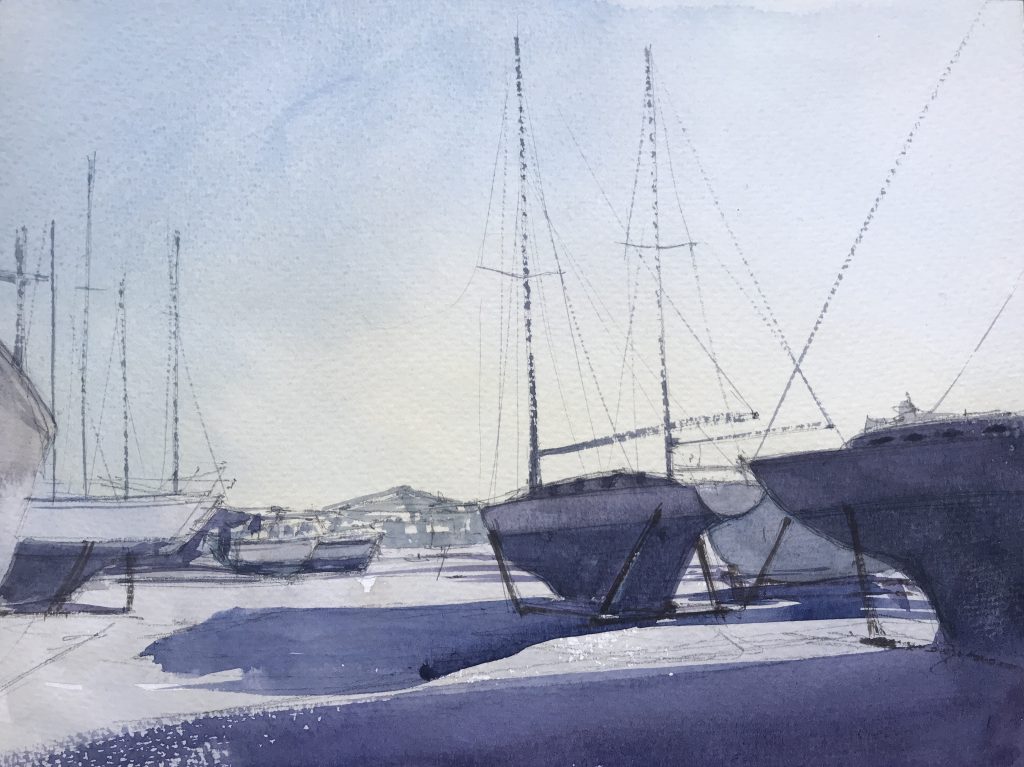 In chronological order, here’s what’s been keeping me entertained since last week’s post!

In an attempt to break away from my recent reliance on Rowland Hilder – I decided to force myself to focus on some of the reference material I got in France this year. I wasn’t as prolific or inspired by what I saw this year as I have been from previous visits but I thought I had one or two scenes that were worth spending some time with.

Not far from our campsite was a small village called Cubjac which had a very picturesque bridge. I photographed it on a few occasions but never managed to be there when the light was at its best. The more I looked at the images, the more I felt put off by the scene. It just felt a little ‘too pretty’ somehow!

I had however set myself the challenge so decided to just knuckle down and press on. I painted this on a 10 x 7-inch page from a block of Arches rough paper:

I enjoyed parts of this and was quite pleased with how the reflections turned out. I did think that I’d return to this on another occasion with the aim of painting it slightly more loosely.

I think it was this aim alone – painting more loosely – that led me to my next subject, a view down part of North Street in Brighton. I’d taken a few images of this scene as I particularly liked the ornate corner building but there was also a strong shadow across the foreground that I thought made for quite a striking composition.

Again, there are parts of this that I quite like, such as the loosely indicated bustle of people and, because I paint them so rarely, the car! Probably the main thing though was just the act of doing it!

I’m delighted to report that as the week progressed, the malaise of lethargy and tiredness that has beset me of late started to lift! The general consensus (not of the medical profession but of friends and colleagues!) is that I may have been suffering from a touch of ‘post-viral fatigue’. Apparently, it is a thing and the symptoms do fit with what I’ve been experiencing. The great thing, however, is that I appear to be emerging from the shadow that this has cast over me of late.

I could tell that things were on the up when I decided to take a scenic and longer cycle ride than I’ve felt up to of late. The return part of the trip took me along a coastal path that goes past Brighton Marina, where I stopped to take a few photos of the boatyard. It was the end of the day so there was no one about and, to take the photos I had to put my phone through the railings but I got a few contre-jour photos. The sun was too bright to be able to see what I’d photographed there and then, but back home I thought there were a few images that I could do something with.

The following sketches were all done in old 12 x 9 inch Langton Rough Watercolour block. I’ve had a few of these lying around for a while and have decided to just use them up. I don’t usually paint with this paper but am hoping that by just committing to use it, to get shot of it as much as anything, will help to free me up from any sense of ‘expectation’.

Here’s a little series of boatyard sketches, shown in the order that I painted them.

Sketch number 3 is my pick of the four but what I’m most pleased about is the overall sense that there’s some energy, variety and, dare I say, personality creeping into the brushstrokes and mark making.

Leaving the boatyard behind, I returned to my photos from France and to an image of the medieval town of Sarlat. Another very ‘pretty’ town that, not unsurprisingly, is also overrun with visitors during the summer months! This is a view of the main square. I would have liked to have visit on a market day when there this square is also festooned with the colourful umbrellas and awnings of all the different market stalls, but alas I was there on a different day!

I really struggled with this sketch and had to force myself to continue with it on a number of occasions – and I’m quite glad I did. Not so much because I think there’s anything special about it, but because by persevering it did turn out better than I had anticipated it might, and it does capture some of the bustle of the place.

Even though I haven’t at any point actually stopped painting – in fact I haven’t ‘not painted’ for about three years now – working on these sketches felt a lot like learning to paint from scratch all over again!