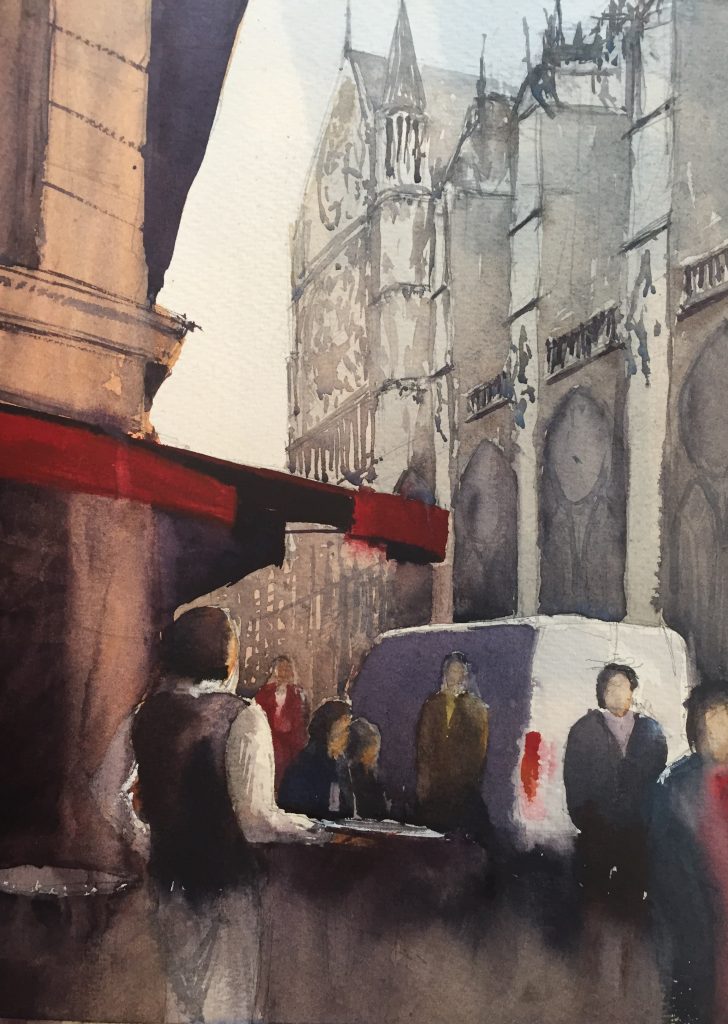 Back in 2017 I posted a painting that I’d done of ‘Café aux tours a Notre Dame’. The painting was based on my then recent trip to Paris and some photographs that I’d taken whilst there. I signed off that post by vowing to return to the subject another day. Fast forward a few years and, a short time ago, I received an inquiry about that particular painting. Looking back at it now however, while I’m still intrigued by the subject matter, I’m not particularly proud of the painting itself:

The inquiry was, however, sufficient motivation to revisit this scene.

I quite like the challenge of revisiting a view that I’ve painted before. At it’s best, I think it can be a great way of marking progress. To me, it does seem reasonable that taking the many intervening brushstrokes of experience and bringing them to bear on a previously painted subject should be a reasonable way of benchmarking the progress you’re making. For this particular challenge, I knew that I wanted to change some elements but part of my brief was a composition that featured both the café and Notre Dame – so I was committed to working with the same overall features.

As I’m really enjoying my sketching at the moment, I thought I’d start off with a sketch to see how I might correct some of the compositional elements that I dislike in the original painting. Here’s my first A5 sketch:

I quite like this sketch, and the difference made by removing the van of the original in favour of some figures. I don’t however like the rather static line of heads that cut across the image. I thought I’d do another sketch, but this time to have the waiter facing towards the viewer:

Again, I enjoyed this sketch, but still felt I was struggling with the figures. This time, while there was a little more variety to the figures, there still seemed to be a row of intimidating figures, all facing forwards, looming towards the viewer. Third time lucky then:

This was an attempt to combine the parts that I like from the previous two! While I still don’t feel I got the figures as I’d like them, I do like the overall composition of this one.

What I’m much more pleased about however is the general ‘feel’ of these three sketches. As is so often the case, I think that these little studies have a spontaneity, energy and directness about them that it would be great to bring to my more ‘finished’ paintings.

No promises but I’ll hopefully have something a little more substantial to show on this next week.

It would be remiss of me not to acknowledge the recent passing of the great watercolour artist Charles Reid on Saturday 1st June. I have a number of his publications and, though not an artist that I’ve been influenced by as much as some others, I have learnt a great deal from studying his work and his approach. He had an eminently distinctive and expressive style, the influence of which I see in many watercolour artists today. Since I started painting in earnest, I’ve been struck by how kind, generous and supportive the overwhelming group of people are that make up the watercolour community. This somehow makes the passing of one of it’s elder statesmen all the more poignant.