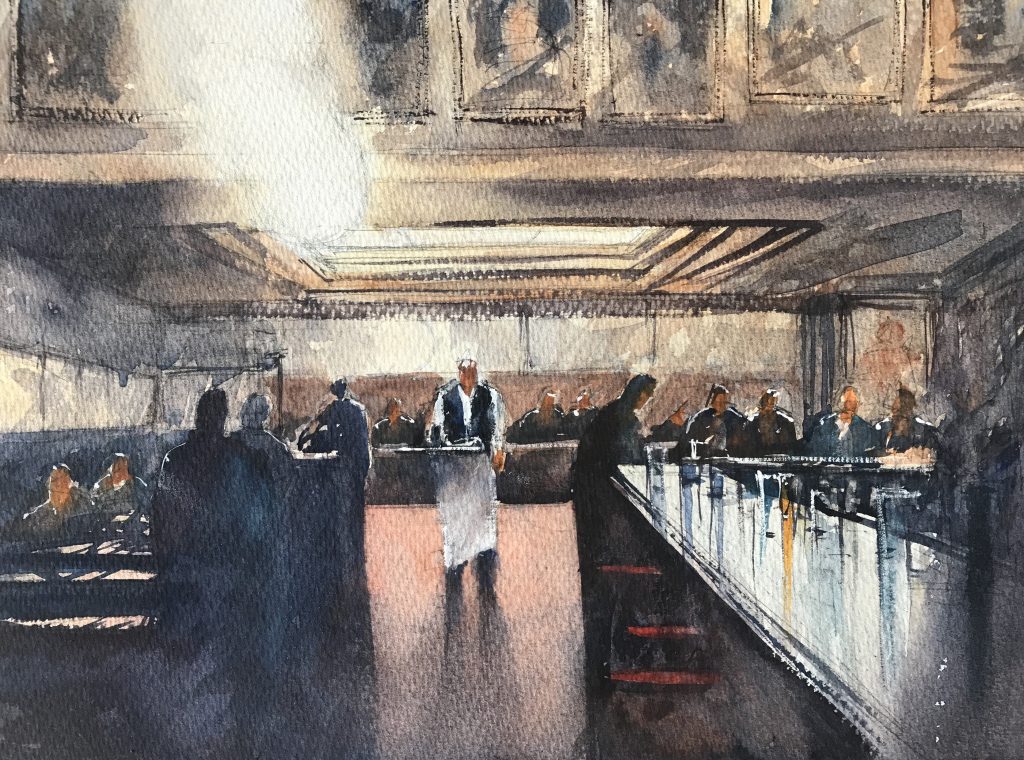 Last weekend saw the final three days of this year’s Artists Open Houses. I had particularly high hopes for the final weekend, not least because I’d convinced myself that hordes of potential buyers had been holding off until the final weekend before committing themselves. I must also confess that another motivation was that I’d mentally already spent the money that I hadn’t yet made! I’ve had it mind to treat myself to a new camera (or rather a second hand camera that would be new to me!) Aside from spending money that I haven’t earned yet, I’ve had quite an eventful week – not necessarily by the dictionary definition of eventful, but I by my own standards I feel like I’ve covered quite a lot of ground this week.

To begin with, however, some light relief – here’re are couple of quick snaps from my final day of painting at Art at Zerbs.

Many of the artists that I follow and try to learn from speak of the importance of telling a story, knowing what you want your painting to say or having a vision for your painting. While I completely understand this, I often feel quite contrived when I try to apply any form of narrative to my own work. I usually feel myself thinking that ‘it is what it is’. This may be some people crossing street in some dappled shade on a summer’s day but I feel quite awkward about this being ‘a story’.

Usually, I decide on a view and what it is I like about it (which invariably is some particular quality of light), paint it, and then, afterwards, try to think of a title for it.

I know that at least a few readers of this blog are familiar with the work of a wonderful American watercolour painter and tutor, Gary Tucker. He’s a wonderful painter and I really enjoy his short video tutorials and feel that I learn a great deal from watching them. I was watching one last week ‘Crossing at Colombus Circle’ and it really struck a chord with me. He suggested that it can sometimes be helpful, having once identified your scene, to think of the title of your painting before you start to paint it. Your title can then help you to plan your painting to ensure that it focuses on what you consider to be the key element or ‘the story’.

This seemed to me to be a great workaround for my ‘awkwardness’ at trying to contrive a story. A subsequent discussion I had on this subject presented me with another approach. This was to consider the ‘who, what and where’ of an image. In the instance quoted, this questioning approach was used by an illustrator to help them determine what scene from a story to illustrate. The subject of any illustration would be filtered through this lens of who, what and where. This again seemed like a useful approach to try out. So, suitably armed with a few new tools, here’s how I got on.

First painting of the day

After last week’s barbershop painting, I decided that rather than spend a whole day painting one larger painting, for my last day of painting I would endeavor to do two smaller paintings, with the aim of having to work more quickly and to minimise the risk of overworking my paintings. This did entail a little more planning in terms of needing to identify two subjects and have them sketched out in advance.

Here’s a quick A5 sketch I did of a view of Brighton train station. In this, I was trying to simplify the mass of detail in the Victorian ironwork in the roof, not to mention all the visual clutter of the station, and focus more on the figures.

I quite liked this sketch but didn’t like how central and dominant the train was so thought I’d try another take on this and adjust the composition slightly.

It was only at the end of this sketch that I put in the foreground shadow, and then the other diagonal shadows across the platform. Placing these shadows in really enhanced the sense of light streaming in through the glazed roof and, I thought, created a much more dynamic painting.

I was really pleased with how this sketch came out. I think it has an energy and a spontaneity about it that was sorely missing from last week’s barbershop painting.

It was only after I’d painted this sketch that I watched the Gary Tucker video, but I was determined to apply this to the painting that I would do at the Open House. My first thought was ‘Station shadows, Brighton’ – nice, simple and would keep me focussed on the shadows that I felt made the painting. The ‘who, what and where’ approach led me towards ‘mid-morning passengers, Brighton station’. I carried both of these titles in my head while I sketched out the scene:

So, with two potential titles and my sketch to guide me, here’s the finished painting:

Second painting of the day

After a quick sandwich for lunch, I had to get started on my next painting pretty quickly if I was to get a second painting finished before the day’s end! My second subject started in a similar way to the first, with a quick A5 preparatory sketch:

This sketch was done back to back with the station sketch and I think that the two of them are right up at the top of my admittedly limited leader board of ‘sketches that I really like’! Again sketch this was completed prior to watching the Gary Tucker video, but as I sketched out my quarter sheet, I had in mind the title ‘Le saveur’ (The waiter) because the subject is a French café/restaurant. I did find having this in mind really helpful on this painting. With this title in mind, I turned the waiter around so he was facing us, and tried to isolate him a little more in the painting and make him more strongly the focal point of the painting. Here’s how it looked sketched out:

And, with the title in mind and the sketch as a reference, here’s how I got on with translating the sketch to a larger painting:

This painting felt a little more pressured than the one of the station. This was partly down to some of the complexities of this painting but more due to a large influx of visitors (and friends) who stopped by to chat during the afternoon!

Nevertheless, I was happy to be able to complete this before the end of the afternoon and also felt very happy with the end result. As with the station, I still think that the sketch has a little more charm to it, but to have completed this with so much else going on around me, I felt very satisfied with my day’s efforts. I certainly felt that I’d earned the celebratory drinks that our wonderful hosts Jan and Linda broke out to mark the end of this year’s Artists Open Houses!

On a personal level I’m delighted for Jan and Linda that Art at Zerbs is one of the 15 houses that has been ‘long-listed’ for ‘best open house’. This is no mean feat considering this is the first year that they have opened their house up, and that there were over 180 other venues in the mix this year!

The hordes of buyers that I’d envisaged descending on me over the final weekend didn’t materialise but I did make a final day sale which, together my sketches and paintings, really did bring my participation in this years Artists Open Houses to a delightful conclusion. This is the final painting that I sold:

I was particularly pleased to sell this painting because it’s one of my favorite paintings from the past year. I can vividly remember painting this scene as it was the first time that I had painted on Saunders Waterford Rough High White – which I’ve now painted on almost exclusively ever since. Paper aside, this painting is one of those that I consider a landmark in my development, so I was doubly pleased that someone else also liked it.

So, all in all, quite an eventful and, dare I say a positive week! I had some lovely conversations with people, it was great to finish with a sale, I’m feeling really positive about my sketching and translating my sketches into larger paintings and the new approaches to telling a story/coming up with a title are already showing great promise! If anyone else has any other approaches that they take in this regard, I’d love to hear them!

While that’s it for another year for the Open Houses, I’m afraid there’ll be no such let-up or respite for any readers of this blog! I’ll be back again next week (hopefully with a little less news!)