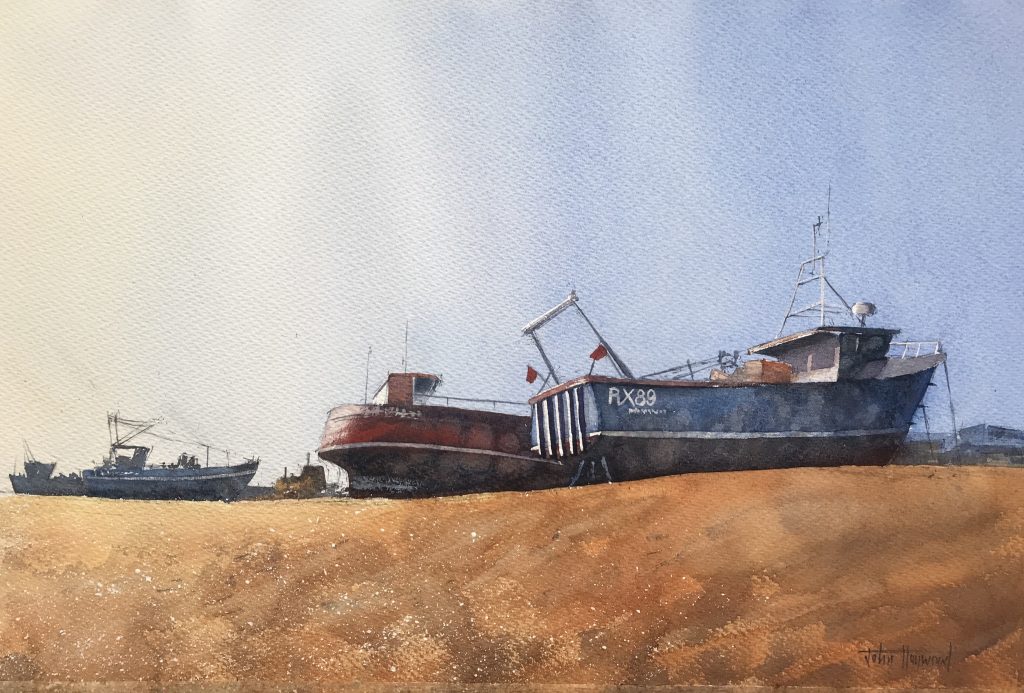 Felt great this week to have the enthusiasm, motivation and inspiration to return to painting my own work watercolours! Last week’s trip to Hastings proved to be just what I needed to inject a little bit of the inspiration that I think has been missing of late. It never ceases to amaze me how seeing new places with fresh eyes really opens up the senses!

As I’ve mentioned previously, Hastings is home to the country’s largest on-shore fishing fleet. What’s great about this is the opportunity it gives to move freely in and around the boats so that you can get to see them from some really interesting angles and perspectives. This is what really appealed to me about this particular composition which I felt provided quite an unusual and dramatic view of the boats.

Heres the initial sketch and you can also see where I’ve applied some masking fluid. I was keen to ensure that I preserve some whites and, on the beach, I used a stiff brush to spatter some fluid onto the beach pebbles – again to preserve some whites that I hoped would add some texture and perhaps give the impression of light catching pebbles.

I felt that the first wash was going to be crucial as I felt that the graduated light in the sky really sets the mood for the rest of the painting.  I wet the sky area first with clean water, then applied just the faintest washes of raw sienna on the right, and then started to add in a wash of Cobalt, moving then into French Ultramarine. These were all done wet onto already wet paper, so there was a lot of wet pigment sloshing about the place! My board wasn’t attached to an easel so I was able to pick the board up and title it in whatever direction I wanted to get the washes to mix together smoothly. I really like doing this, I love seeing the pigments mix and move across the surface of the paper.

As most of you probably know, watercolour always drys lighter than when it’s first applied and working so wet, I often feel this amplified even further.  I liked the smoothness of the wash, but the blue on the right-hand side didn’t quite feel strong enough to convey the movement of light that I’d been hoping for.

After the sky was done and sufficiently dry, I move onto the foreground. My plan was to do a light-ish wash and to gradually build up the depth of tone and texture. Hastings is a pebble beach, but there’s no way I can get into painting individual stones and pebbles so I was feeling my way along to creating something with some texture and variety but in a loose-ish manner.

Next up was the boats. I started with the most distant boat on the left and gradually worked my way along the line of boats. It felt good to do these in one hit because they’re all connected together and I was able to flow paint between them which I think helps to unify them.

The more I looked at it, the more I felt that the sky wasn’t working as hard for me as I wanted it to!  I liked the lightness on the left, but felt that it needed to be stronger on the right. Once the paper had completely dried out, I applied another wash, this time working from the right, using a mix of Ultramarine and Cobalt. I also didn’t wet the paper first this time. I started off quite strong and then gradually diluted the wash as I move down the page (I’d turned my board up so it was portrait). As I reached the bottom of the board, I was using pure water just to move the wash along. (I was also careful to try my best to cut around the boats that I’d already painted to avoid anything bleeding into this wash.) Once I’d finished applying this, I turned the board upside down again so that the wash would move back down towards the side of the sky that I wanted to be darkest.

This was then left to dry and, to my great relief, it looked okay and immediately felt much better!  Next up was some more texture over the foreground area, a bit of drybrush that, before it dried completely, I then wetted back a little. At this point, I really wasn’t quite sure what I was doing, nor exactly what I was aiming for – so opted to just stop.  At this point, I was wary of ruining it unnecessarily when perhaphs I’d already done enough to suggest that ‘you’re looking at some sort of a beach’.

Next up was to remove the masking fluid from the boats.

Obviously, some of these pure white areas are a bit shouty at this point but it doesn’t take too much work just to knock them back a bit and make them look a lot more subtle. I did this and then started to add in the final details, trying to be mindful not to overwork it.

Finally, I took off the splattered mask on the beach. I thought that this may have made more of a difference that it did, but I think it’s probably a good thing that the effect isn’t too obvious.

I touched up the odd brush stroke hither and thither but then felt I had to tear myself away from it to prevent over-fiddling. Here’s how I left it:

Overall, I’m really pleased with how this turned out. I know it’s probably hard to tell viewing this on a screen, but one thing I like about it is that it works from a distance as well as from closer up. Still feeling enthused, inspired and motivated, I’ve already started work on another painting of boats at Hastings!