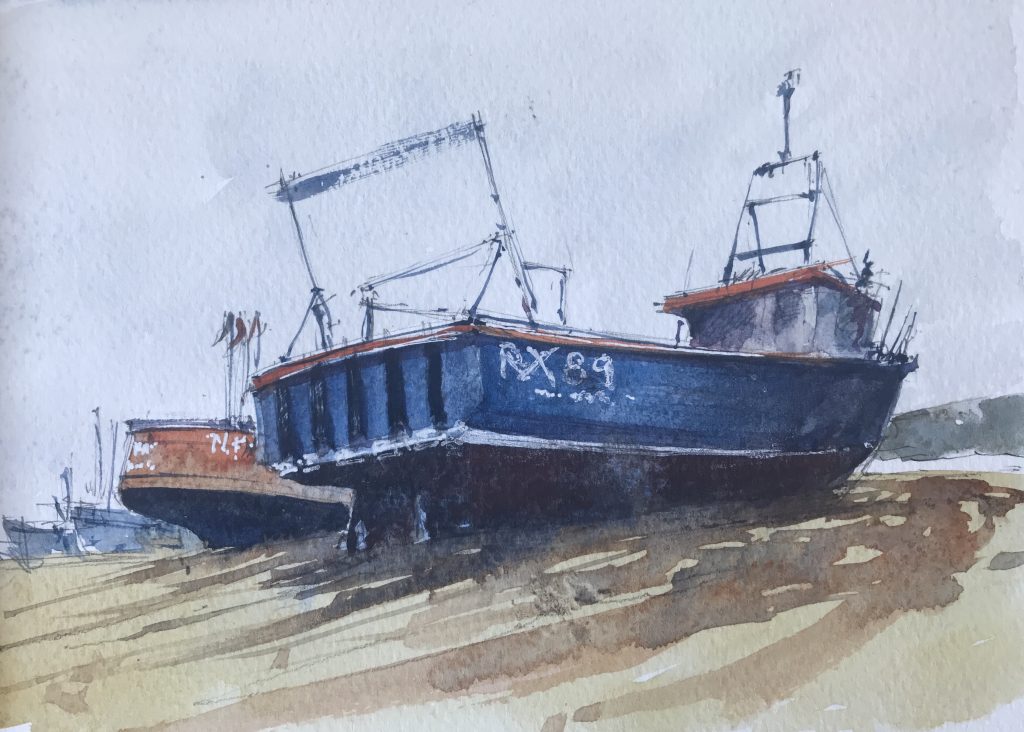 After spending so much time recently in the company of Ian Potts’s paintings, I was keen to break away from them even though I wasn’t feeling especially inspired to paint anything of my own!

I did however recently have some beautiful weather for my bike ride to work and took off across a field to capture a couple of photos that I thought could make for some suitable subject matter. Sadly they weren’t as great as I’d hoped but, nevertheless, I thought I needed to do something different to wean myself off Ian Potts paintings.

Here’s a selection of work in progress shots that will hopefully demonstrate how this painting evolved.

There are moments in the painting that I really like – even though I find the overall painting quite underwhelming. I think this is largely to do with the subject matter as much as how I’ve painted it. (Haha, even as I wrote this the old adage “there’s no such thing as bad subjects, just bad paintings”!) Painting this did also feel a little strange. After a few weeks of basing my paintings on works by another artist – I felt as if I was trying to rediscover my own approach whilst also trying to adopt elements of the approach that I imagined Ian Potts might take. I have a suspicion that this tension, between following my own path and following too closely in the footsteps of others may take a few weeks to settle down.

I’m just back from a lovely few days spent in the seaside town of Hastings. It’s just over an hours drive away from where I live but, to my shame, I’ve not really spent any significant amount of time there. Aside from being steeped in English history, in particular the 1066 Battle of Hastings (which didn’t actually take place in Hastings but in neighbouring Battle) it’s also been the inspiration for many an artist, not least because it’s home to the UK’s largest ‘on-shore’ fishing fleet which makes for excellent subject material.

Unfortunately, two of the three days that we spent there were rather gloomy and overcast but the sun did come out on our final day and I did manage to spend some time around the boats capturing some images that I’m hoping will become the inspiration for a series of paintings. Here are a few quick studies that I did in an A5 sketchbook based on the views on the grey and gloomy days…

and this one is probably my pick of the bunch….

I already have in mind the first view that I’ll be working up into a larger painting – and how I’m going to go about it –  so I’m really looking forward to getting started and will hopefully have something new to share next week!