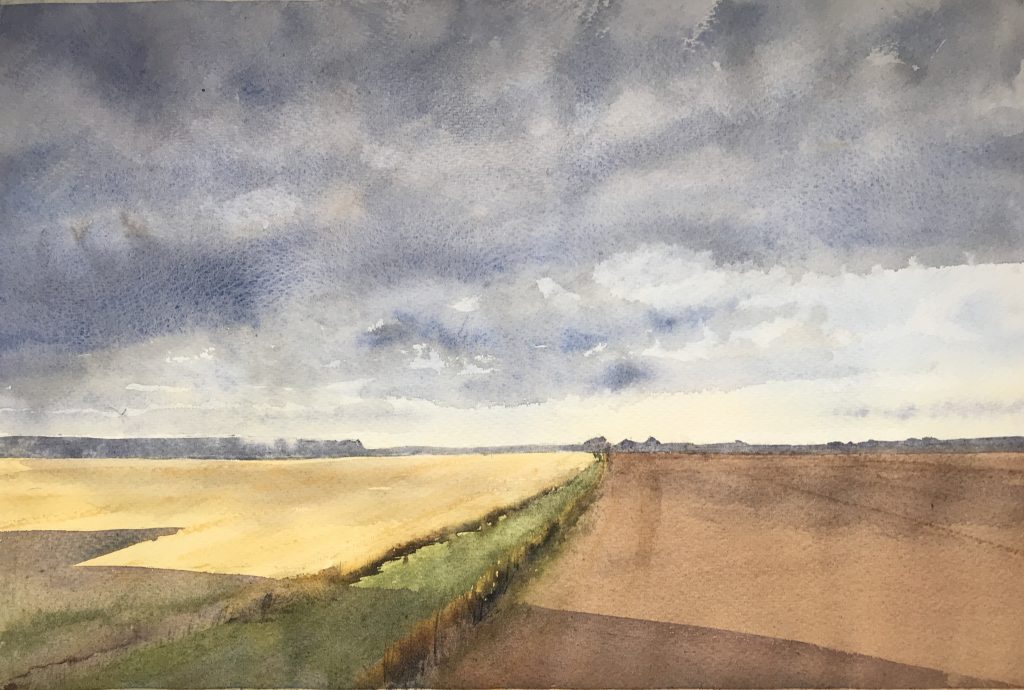 From a lightness of touch to a heaviness of hand

Riding on a bit of high after last week’s paintings, I was really excited at the prospect of seeing what might happen next.

As Edward Wesson had proved the inspiration for my last painting, he seemed the fitting starting point for my next. Leafing through Barry Miles’ book, Edward Wesson (1910 – 1983) I came across a view of an old chalk quarry near Lewes, a mere stone’s throw/30-minute drive from me.

I still really like the idea of being able to track down an actual Wesson viewpoint so that I can, as it were, stand in his footsteps.

This particular painting was painted in oil, so represented a particular set of challenges if I was to revisit it in watercolour, but I felt confident I could do it justice.

Here’s how I got on…

It’s interesting for me to see these sequential stages as it helps me discern where this painting started to go awry! Overall, I quite like it up until stage two. From this point on, however, it went rather rapidly downhill, gathering momentum as it went!

As much as I tried to treat this with a lightness of touch, I got sucked into more heavy applications of paint. I was consciously trying to avoid emulating an oil painting in watercolour but despite my best intentions, I applied more and more layers of paint as this painting gradually slipped further and further away from me!

Keen to move on from this disappointment as quickly as possible, I decided that I needed to move away from maestro Wesson and seek out my own inspiration.

I came across a photo that took many years ago whilst on a walk in The Witterings, a delightful area on the South East coast near Chichester. Once again, despite efforts to keep it light, I produced another heavy overworked painting.

From a distance, this isn’t as disappointing as my first painting, but nor does it fill me with joy!

I can’t deny that this week’s painting lows, following on so quickly from last week’s high, have left me feeling a little bit out of sorts. Still, much like the old adage of falling off a horse (or is it a bike?) the sooner I pick myself up and get painting again, the quicker I’ll get over these watercolour tumbles!

On a cheerier note, I came across a few images during a clear out the other day which made me smile and made me realise quite how long I’ve now been dabbling at this! I’ll be adding these to my ‘about‘ page but thought I’d share them here first.

Working out which ‘studio’ each of these was taken in made me realise that these were all taken just over seven years ago. It was nice to be reminded of my days ‘in the field’ and to reflect on a lot of watercolours under the proverbial bridge in the intervening years.