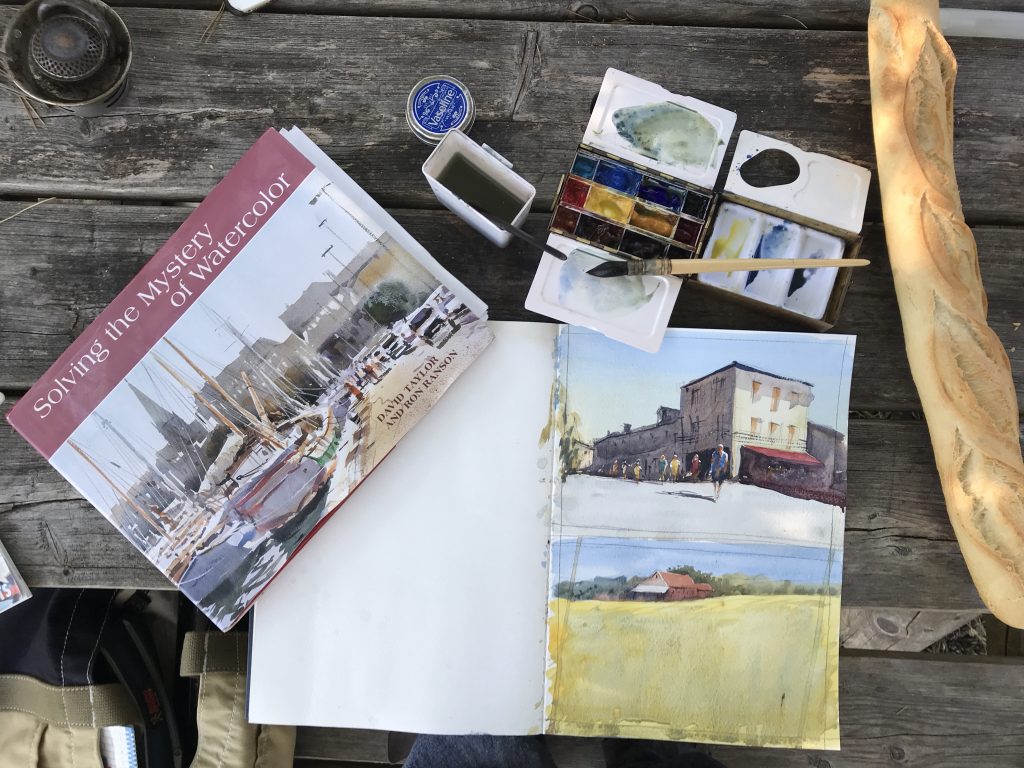 This week’s watercolour paintings are a couple of ‘amuse-bouche’ ahead of the main course post to introduce my latest watercolour palette, which I feel merits some dedicated attention!

Without wishing to spoil that post, I feel I can’t continue without at least alluding to my latest indulgence, as it has played such an instrumental role in these two paintings. In anticipation of my new palette, and in the knowledge that it had 16 paint wells, I’ve been going through my paints and deliberating on my ‘must have’ colours. I’ve also been mindful of some recent constructive comments about my use of colour, or rather my reliance on greys.

When I was away in France in the summer I took with me for guidance and inspiration David Taylor and Ron Ranson’s book ‘Solving the Mystery of Watercolor’ and found it a really wonderful companion and it inspired the approach I took with many of the sketches that I made.

I recalled that this book featured some interesting advice and suggestions on some colour mixes so I’ve been referring back to this. So, with my new palette, refreshed paints and some invaluable guidance I set off on a new adventure to test everything out!

As I’ve been harking back to France of late (I blame it on the weather!), it seemed like an appropriate place to seek out inspiration. The first scene to grab my attention was a landscape featuring a house on a hill. The subject was similar to many of the sketches that I’d done during the trip. I was attracted to it primarily because I thought I’d be able to paint it quickly, but also because it featured a few challenges too, not least the foreground area!

I’m not entirely convinced that I rose to the challenge of the foreground but what I was pleased with was a lightness of tone that I think may have been missing from some of my paintings – often the result of my first washes being too heavy. I think this came down to a number of factors. Firstly, the new palette – I’m really intrigued by how the paints behave on the mixing surfaces. Secondly the colours and the new combinations – as I’m trying out a few new colours (such as transparent yellow and cadmium orange) I had to spend a lot more time mixing and adjusting my colours on the palette than I usually do. I was also working with very ‘loose’ paint – paints that I’d added to the palette from tubes and had then sprayed liberally with water before giving them a mix with a cocktail stick! This had the result of not picking up too much paint, or too strong a mix when I dipped my brushes into the paint wells.

I think this combination of factors led to me achieving a ‘lighter’ painting than of late, a painting that plays much more to watercolour’s transparent qualities. I also resisted the urge to go back into some areas and re-work them. The foreground, for instance, was all completed as part of the first wash. I was tempted to re-work this but, as I still wasn’t quite sure what I’d do to improve it, or if it would have the desired effect, I opted to leave it. It could still probably be cropped some and still work, but I’m glad I resisted the temptation to meddle as I think it would most likely have upset the overall balance. Oh, I also think it’s more ‘colourful’ too than many of my recent paintings, without losing any sense of unity.

Feeling encouraged by this effort, next up was a scene that felt much more familiar to me in terms of subject matter, but also more involved in terms of time. Again, sticking with France but this time a sunlit square in the delightful town of Perigueux in the Dordogne.

I won’t do a blow by blow account but will pick out a few things of note.  I started this painting with a wash that is still visible on the sunlit walls of the buildings. This initial wash also included all of the ground areas that, with the exception of adding in some shadows, I didn’t touch again.

The last thing I painted, was the sky. I did this purposefully as the sky was so strong and powerful in tone, that I thought if I painted it first, I’d end up painting all of the subsequent colours too strong too. Even painting the sky last it felt strong, but I think it holds up okay and I’m glad I did things in that order. As for the colours, again I was experimenting and spending lots of time mixing in the palette before committing to paper. What I like though is the variety of colour and the warmth in some of the shadow areas.

I must confess to being quite heartened by these two paintings. Despite their differences, I think there are things to like in both of them. I’m excited by some of the new colourways and am pleased to be gradually making friends with my new palette, which I hope to be able to introduce to you more fulsomely soon – perhaps once we’ve got to know each other just a little better!