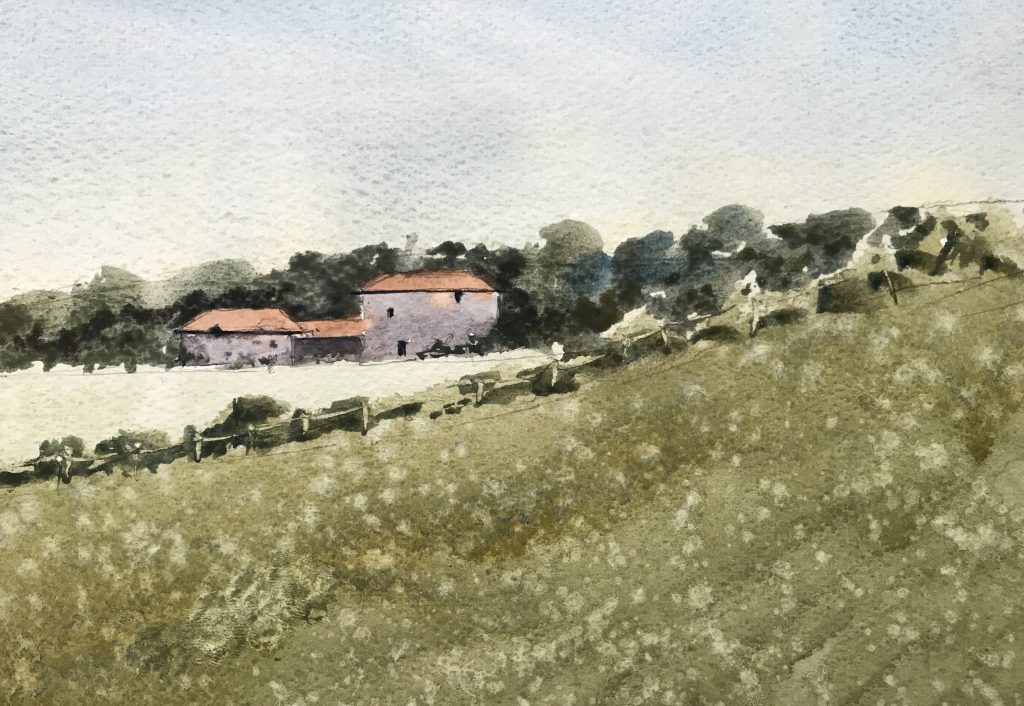 Heart Research UK’s ‘Anonymous HeART’ fundraising auction came to an end at 9pm on Sunday 11th November. I’d been following the auction closely – especially my own watercolour submissions – as I was really keen to see how much they might raise to support such a great cause. As the auction was anonymous, this is the first opportunity I’ve had to share with anyone what I contributed. The format for all submissions was a 2d A5 format, that had to be completed on or attached to a card that was supplied by the charity. Here are the three little studies that I donated for auction:

It was great to watch the bids gradually inch up over the week of the auction. In last week’s post, I mentioned that my donations had accrued a combined sum of just over £100. I had no expectations as to what these might eventually achieve by the end of the auction. My view was that every little bit helps. Of course it’s a wonderful cause, but there were also hundreds of submissions competing for attention plus all of the vastly different approaches and, dare I say, ‘quality’. To cap it all, there was also the lottery of ‘who did what’ – with many people trying to second guess which works may be from a celebrity or well-known figure. I can’t begin to imagine who anyone thought ‘I’ might be, and I doubt I’ll ever find out!

Anyway, here are the scores on the door for my donations at the close of the eBay auction on Sunday evening:

I was totally taken aback that my three sketches raised a total of £358.66! I’m actually finding it hard to put into words but it’s a wonderful feeling.  I don’t know as yet what the total raised is but it feels great to have played a little part in this initiative. There’s no way that I could support this charity with a financial donation anywhere near this sum, but to submit a few watercolour studies and see them raise that much money; it’s simply staggering, hugely gratifying and humbling! I know that the auction was anonymous but so too are the bidders. Should by any fluke of google/twitter /Facebook etc lead any of the purchasers back to this site – then I’d just like to say a huge ‘thank you’, firstly on behalf of Heart Research UK for supporting their amazing work, and on my own behalf. I’m sorry that I’m not the famous person that you may have imagined me to be, but I hope that you may also have been prepared to bid so generously because you also liked the paintings!

Here’s what Heart Research UK have said about how the money raised will be used:

Everything raised by the auction will be invested in pioneering medical heart research: making hearts healthier in local communities: masterclassses for clinicians and driving innovative education in schools. Together, we can take on heart disease and keep those we love around for longer.

As much as I have my own personal milestones on my watercolour journey, there’s a certain irony that one of the most heartwarming of them should come from something that I had absolutely no idea about until about four months ago. Should I ever receive similar invitations, I certainly won’t hesitate to participate again and would also encourage others to do the same. It’s a wonderful feeling to be able to contribute something so readily that would otherwise be so far beyond my financial means.

Okay, I think that’s enough gushing for now, time to get back to some painting!

Thoughts on A wonderful watercolour feeling

53 thoughts on “A wonderful watercolour feeling”