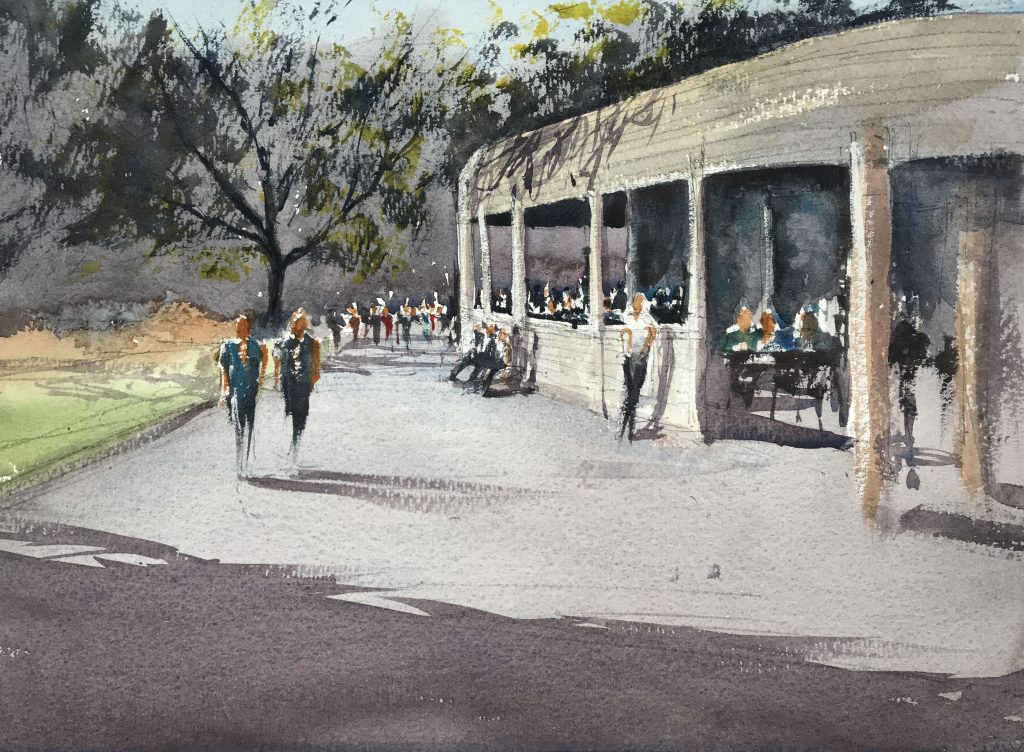 A much anticipated day of plein air watercolour painting in St James’s Park London got off to glorious start when the sun came out to play! It really was a most beautiful day. Participants in the British Plein Air Society’s paint out event were invited to congregate at the Café Inn the Park at 10.30am. As I walked through the park to make my way to the rendezvous I passed lots of painters already set up, many of which looked as if they’d already been there quite a while. Here’re are a couple of photos I took en route as I was already trying to plan where I might paint from. Hopefully, they give a sense of the how beautiful the day was.

There was quite a gathering by the time I arrived and there was a palpable sense of excitement. Many of the people there appeared to be old friends but there also seemed to be lots of people like myself, who didn’t know anyone! Once I’d exchanged a few pleasantries and got myself a coffee, I was keen to find a spot to paint from and get cracking.

There was quite a gathering by the time I arrived and there was a palpable sense of excitement. Many of the people there appeared to be old friends but there also seemed to be lots of people like myself, who didn’t know anyone! Once I’d exchanged a few pleasantries and got myself a coffee, I was keen to find a spot to paint from and get cracking.

I enquired with others about the direction the sun would be travelling in throughout the day and then set off. Despite some of my pre-determined views I had in mind, such as Horesguard’s Parade and Admiralty Arch  (I knew that I’d really like to get some buildings or architecture in my view!) – I ended up walking about 100metres from the Café, beneath the shade of a tree. What I liked about the view was the sunlight hitting the side of the café, contrasting with the background trees, and the bustle of the figures in and around the café. In my mind, I knew that I had the capacity to just wander around the park looking for the ‘perfect view for me’ and that, to avoid this, I just needed to commit to a view.

On my previous plein-air adventures, I’ve extolled the virtues of my ‘viewfinder’ to help me isolate my view and identify the broad composition. On this occasion, however, I used my phone to do the same. Once I’d selected a good vantage point, I took a few different photographs. The advantage of this was manifold, it helped me to isolate the view and composition, captured some figures that I could use as a reference, ‘set the scene in time’ – meaning that rather than chasing the shadows and the effects of the changing light, I could refer back to it later to remind myself of the view that had originally captured my interest. Finally, having the photo was great to be able to refer to as I sketched the scene out. The sketch I did was much looser and less detailed than those that I normally do when I’m working indoors and I wasn’t entirely sure if this was a good thing, or just an indication of my usual impatience to get on with doing some painting. I did this sketching out sat on my little portable stool before setting up my tripod and easel.

After this, everything passed in a bit of a whirl, to be honest. I was aware of the background clamour of the park, the odd person that took an obvious detour on their route across the park to have a quick peek over my shoulder, not to mention some artists that were a little late in arriving and enquiring for information – but I was surprised quite how quickly I found myself ‘in the zone’.

Here’s a really quick video that I took once the dust had settled: [wpvideo XqgVRTv1]

And the final version:

I really did lose track of time painting this, I was utterly engrossed in painting it and, despite some of its shortcomings I loved every minute of it and couldn’t wait to seek out my next location!

I set off across the park with my next destination in mind. It was so utterly brilliant to see so many painters set up and painting. Everywhere you looked there was someone stood at an easel painting, it was really magical. I could help but imagine what first-time visitors to the park must have thought – “is it like this every day!?”, “wow, they sure do love their painting here!”

I’ve long had it in mind to do a view that included Buckingham Palace and my intention today was to try to paint it when the sun was passing behind it so that it would silhouette it and lose some of its detail.

At 4.30pm, participants were invited to congregate on the roof terrace of the Cafe In The Park to compare notes from the day. This morphed quite organically into, as they call it at my daughter’s school, a show and tell session – with painters just propping their day’s labours up and everyone having the opportunity to see each others work and engage in a bit of socialising. Here’s a short video that I hope captures some of the work and the convivial atmosphere (if you look carefully you may even spot my efforts!). [wpvideo uDDlUzYt]

This was a really delightful end to the day, and one that I would have liked to have lingered for longer over but I needed to scoot off to get my train home. As I walked back through the park towards the train station I passed many painters still at their easels, making the most the wonderful light at the end of the day.

It really was a wonderful and uplifting day – due in part to the plain glorious-ness of the weather and the setting, partly the fun of seeing St James’s Park overrun with painters, and partly because I was so pleased with my own efforts. While they don’t rank in my mind as being my best paintings of all time, I think they’re definitely my best plein air paintings to date.  I also can’t deny that I found it thrilling to be painting not just publically but in the heart of the capital!

An unexpected end of year Open Art Exhibition submission! I saw on Instagram an advert inviting submissions for The Worthing Museum and Art Gallery OPEN18 Exhibition. Now, this isn’t an exhibition that I’m familiar with, however, as it’s comparatively local to me, it did catch my eye.  Apparently, it’s a biennial event and, while there’s no particular theme, all works undergo a selection process by a diverse panel of judges, and the criteria for selection is:

As I had a selection of works and frames ready to select from, and the entry fee was most modest, I felt I had little to lose! I submitted the maximum of three works and am now waiting, with baited breath, the judges’ verdict.

For all of the open submission exhibitions that I’ve entered so far this year, I’ve yet to make it beyond the first ‘digital’ judging phase, in which works are initially shortlisted by jpeg photos of work. On this occasion, I had to deliver original works which I hope may work in my favour.

Suffice to say that my fingers are firmly crossed that the Worthing Open18 judges see something in my work that has so far eluded every other judge in the country!