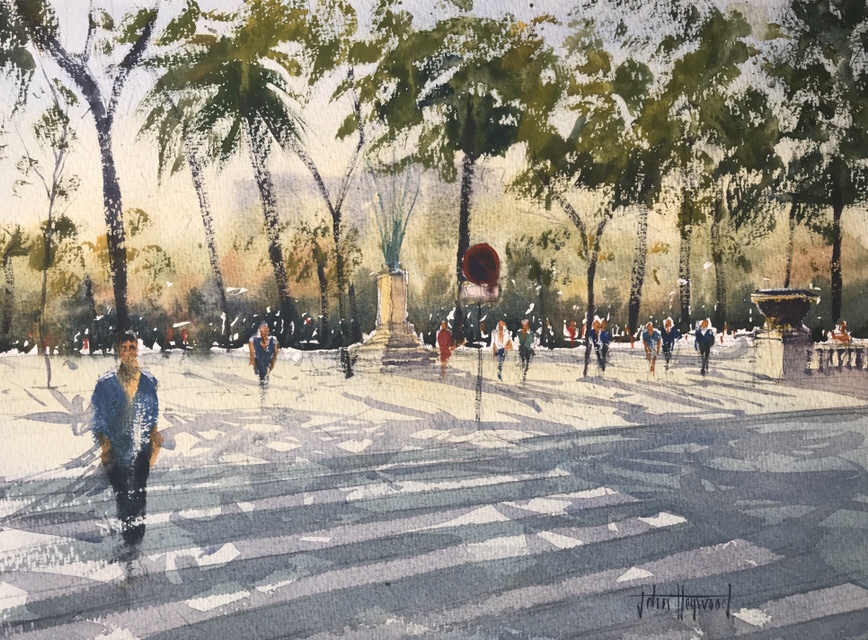 A return to (watercolour) form?

Some of you may recall from last week’s post that, in the true tradition of poor artists, crafts or tradespeople, I was placing the blame of my recent frustrations firmly on my choice of paper. I was pleased then to receive a new supply of Saunders Waterford. In the past I’ve used the ‘regular Saunders Waterford rough’ and, one of the things that attracted me to Arches was the brighter whiteness of the paper, which I felt would give a greater sparkle to my paintings, particularly in any drybrush passages. On ordering this new batch of Saunders Waterford, I selected the ‘High White’ paper, which I hadn’t previously realised existed!

Here’s photo showing the two different types of Saunders Waterford alongside the Arches:

I first washed in a diluted raw sienna across the lower part of the sky, followed immediately by a diluted cobalt blue across the top of the sky, allowing it to bleed and run into the raw sienna. While still damp, I started to drop in a variety of greens to suggest the distant trees and greenery, and then a very feint bluey purple to indicate some distant buildings above the treetops. Still working my way down the page, I started to strengthen the wash, also being mindful to keep the line irregular for where the foliage meets the path, so that I could later use these to suggest people in the distance, and also cutting around the plinth in the middle of the path.

Next came another wash to cover the mid-distance into the foreground, and then a light blue-grey wash for the tarmac of the road. This was all done pretty quickly and I recall really enjoying how the paint was behaving on the paper. It did feel different to the Arches, the paint seemed to ‘stay alive’ for longer – although to be fair to the Arches, I was also conscious that I was working ‘wetter’ than of late, carrying much more moisture in my brush.

By the time I’d finished completely covering the page with the first wash, the sky had dried and I mixed up some thick, juicy greens and, using a small mop brush, began to loosely suggest the foliage of the trees in the foreground. I was conscious of not trying to paint each leaf or each tree, but to try to paint the overall mass of trees, returning to the palette frequently to vary the colour combinations and the tone. This took a few minutes before I got into the swing of it, after which my main concern became not overdoing it, I still needed lots of sky to show through to create the light and the shadows that make the view.

Now that the bottom half of the painting had dried, I mixed up a darker ‘tarmac mix’ to put over the top of the road and to create the zebra crossing, which was a bit hairy but I tried to paint it with a certain amount of boldness rather than giving in to the temptation of being too tentative. And that was it for all of the main features. Changing brushes, I started to add in all of the figures, focussing more on creating a sense of people and activity rather than being overly prescriptive. This stage also included adding in the dry brush tree trunks. Although this paper doesn’t feel quite as rough as the Arches, it’s plenty rough enough to achieve some drybrush. Finally, came a switchback to a big mop brush and decent quantity of bluey/mauve shadow and then loosely throwing in the shadows from the figures and trying to capture the dappled light across the path and the road.

I think the fact that I’ve been willing to ramble on in such detail about this painting (at the expense of boring the reader I daresay!) is an indication of how much I enjoyed painting this, and how pleased I am with the outcome. I think it captures the light and atmosphere well and has a real sense of energy about it which I’m really chuffed with. After the recent few weeks of uncertainty and dissatisfaction with my efforts, it feels like a wonderful breath of fresh air to feel so positive about a painting!

Thoughts on A return to (watercolour) form?

12 thoughts on “A return to (watercolour) form?”