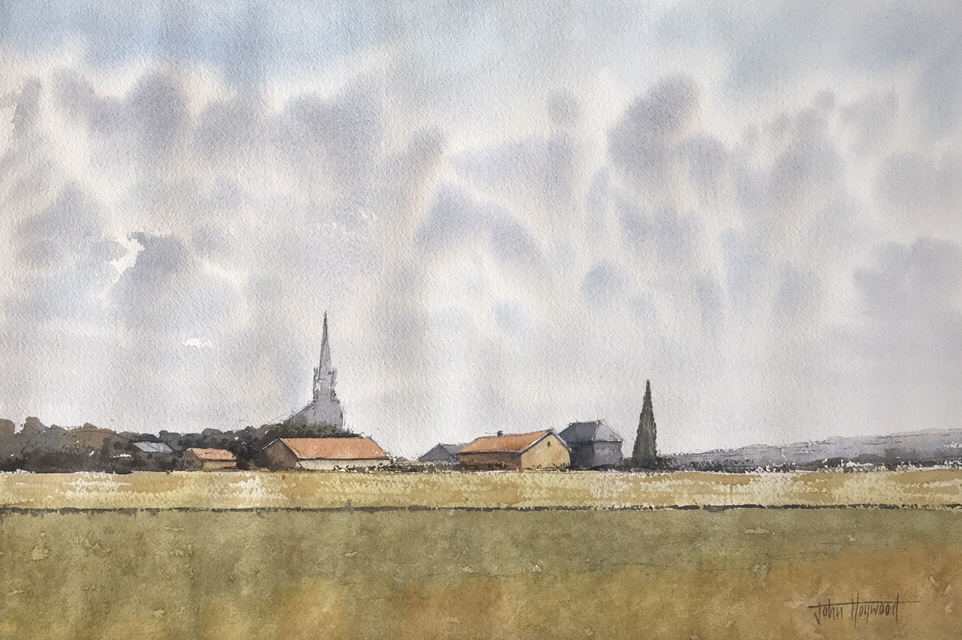 After returning from holiday with an almost a full sketchbook I was really looking forward to turning some of them into larger paintings. I decided to start on a painting based on this sketch, which I’d notionally titled ‘A train runs through it.’

I was pleased with this sketch, in particular, I really liked the textures in the foreground. What I hoped to bring to a larger painting of this view, was a better sky and, with a little more time on my side, I also slightly rejigged the composition. I nominally set the main horizon line across the bottom third of the paper and the distant church steeple and balancing conifer tree are set on the vertical thirds. On the sketch, I felt these were perhaps a little too heavy, so I hoped to treat these more lightly. Well, it’s always good to have a plan. Here are some work in progress shots so you can see how I got on, beginning with the initial outline drawing (you can also see where I’ve indicated the third’s on the masking tape around the border):

So far, so good! Initial washes next. With two-thirds of the sheet given over to the sky, I felt this was a make or break element. To achieve the sky I was aiming for, I knew I’d need to work quickly, so I mixed up some generous quantities of ‘thin colours’. I pre-wetted the entire sky area, then started to apply the pale blue wash across the top of the page. This started to give me a feel for how much the paint was ‘bleeding’ on the pre-wetted paper. I then started to add the clouds, working quickly and trying to ensure that I left sufficient space between each brush stroke so that the paint wouldn’t all bleed together, but would leave white ‘halos’ around each cloud. As I moved down the page I used smaller brush strokes and gradually began to join them all together to help create a sense of distance.

At this point, I was quite pleased with the sky so moved on to the foreground washes to get some base colours in place. My intention here was to replicate some of the textures that I achieved in the sketch by splattering a bit of water on at the right time. Sadly, I got my timings all wrong and tried to do this when the paper was still too wet, so the water splatters just dissipated on the wet surface of the paper, which resulted in a much flatter and less interesting foreground. Even so, I was quite pleased with how it looked at this stage:

I’ll have to apologise for some of the work in progress photos as most of them were taken when the paper was still very wet, so it’s all cockled up and catches the light awkwardly. Having tackled the sky and the foreground, I started to block in the background hills, background trees and move into the buildings.

Somewhere along the line here I began to really stiffen up. I think it was because I thought I was ‘onto a winner’ and with this came the pressure of not mucking it up. The result was that I started to paint the buildings individually in a slightly ‘colouring by number’s’ approach rather than in a broader and looser fashion. Contrast the treatment of the buildings for instance with the distant hills and dry brush on the right-hand side which is much looser, yet more descriptive. This was then followed by some unnecessary fiddling as I was feeling the painting begin to slip away from me!

I should probably have left it at this point, but think I already felt that I was in too deep to pull out or be reasoned with at this point! I didn’t feel that the tone of the foreground areas matched the sky so wanted to strengthen them a little and try to create some more texture. I put a bit of dry brush over the ‘yellowy’ looking strip and then left that part alone. I then washed a darker glaze over the foreground area – again with the hope of creating a bit strength and some well-needed texture. This proved to be a rather fruitless task as what I ended up with was a flat and slightly muddy foreground with little to excite the eye! Once this had dried, I used a liner brush to add in the railway line running across the foreground (yep, that’s what that line is! – to be honest, I only know that’s what it is because I was there in person!).

And that was it.

I do still like the sky of this painting however, all in all, this painting falls someway short of the immediacy and atmosphere of the original sketch. It was nice however to be painting larger again, and to paint standing up at an easel with my big brushes and a spacious palette! Just a shame then that none of this is reflected in the outcome! Painting this also made me realise how familiar I’d become with painting on the paper in my sketchbook, a heavyweight rough watercolour paper, but how different this was to the Arches rough that I’m currently painting on.

I know that working from a sketch isn’t just a matter of trying to enlarge it, but I think I need to give some real thought to what it is I want to achieve with the larger version. Part of me thinks that I was clear on what I wanted to achieve in this instance and that I just didn’t manage to do it. Another part of me, however, thinks that I need to use or view my sketches differently that simply being smaller and quicker studies that I can later paint bigger.

Fortunately, it’s only a bit of paint and some paper! I’m off on another camping jaunt this weekend. This time it’s just for a few days in Wales. I probably won’t manage to do much painting (partly because the forecast is pretty grim!) but I’ll take my sketchbook with me just in case. Here’s a sketch that I did whilst at the same location last year, and a link to the post that I wrote following that trip. I’m already looking forward to revisiting this view!