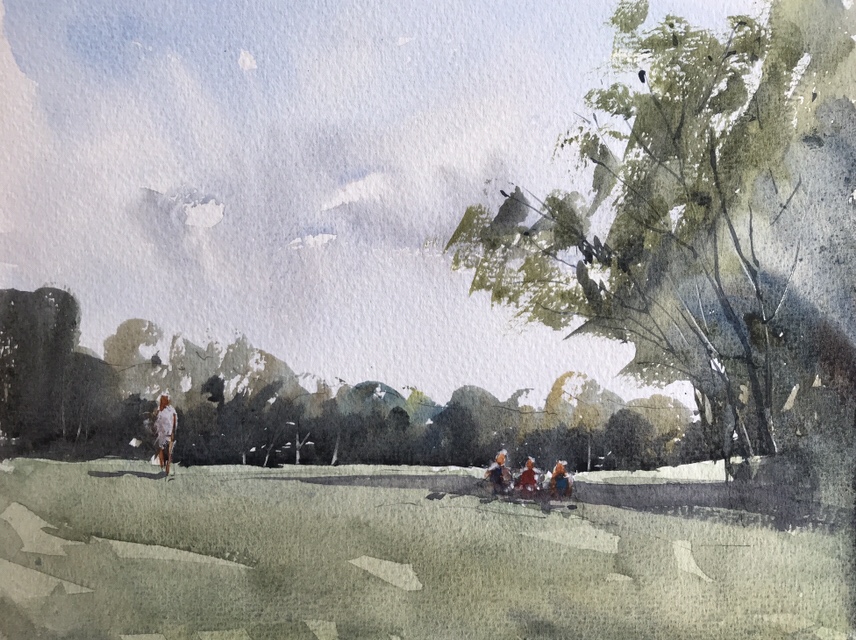 It’s been a funny watercolour week. The first part was mainly tying up some loose ends and admin from the Open House. At the weekend I delivered my ‘house portrait’ that I showed last week – and was delighted by its reception! I also felt a little embarrassed to learn that it will be sharing a room with a rather stunning Eric Ravilous.

This delivery took me to a really beautiful part of the countryside, about 40 minutes drive away from Brighton. Nearby the small village of Barcombe, you can find The Anchor pub. Situated on the river Ouse, you can hire boats and have a delightful paddle upstream. It’s a beautiful way to while away a few hours and I really love the perspective of surveying the landscape from a ‘worm’s eye view’. I was with my young daughter, which added a certain element of uncertainty to the adventure, despite her lifejacket. This delightful little jaunt was to prove the inspiration for this week’s post.

This first view is of some of the boats tethered up on the mirror flat river. This is a half sheet painting and I was particularly attracted to the calmness of this scene. I thought it would also be a great opportunity paint some expansive loose and wet passages. As I was painting this, I went through various stages of ‘it’s great’ / ‘it’s a disaster’. I originally saw the reflections as a particular challenge but, in actual fact, these worked out better than most other aspects of the painting. What really irks me looking at this now, is the boats. I always knew it was going to be tricky balancing out the need portray them with a degree of accuracy, and painting them with a degree of looseness and spontaneity. I fear that in my effort to strike this balance, I achieved neither! I’m also not usually one to blame my photos (so it probably is my painting) but I can’t shake the green hue that pervades this painting!

This painting took me a while to do (especially by my impatient standards) as I was constantly having to wait for passages to dry. On the one hand, this was a good thing as it allowed me time to plan each next stage. The flipside was that some aspects became terribly laboured.

Contrast this with the quick sketch below. This was done plein-air, just a few minutes walk from the view of the boats. After my daughter and I came back from our boating, we sat in the shade of a tree for a few minutes and I started this quick sketch.

In many ways this was quite a challenge for me –  having to paint just what was in front of me. I also knew that the time I had on this would be short (my daughter is even more impatient than I am!) and that this would be more about the doing than what it might end up like. The view was across a field with some seated figures and some walkers. I noted the barest essentials down in pencil and then started to paint quickly and freely.

I spent about ten minutes on this before my daughter got bored with the painting that she was doing and went awol – which necessitated a hasty pack up! Back at home, I added a touch of detail and the odd highlight here and there but in total, this took less than twenty minutes. It’s not a finished painting by any means, but it has an energy and vitality about it that’s sadly lacking in the larger more time-consuming picture.

It may also be worth noting that I did this sketch on a Daler Rowney ‘The Langton’ 140lb, 12in x 9in rough watercolour block. I’ve had this one lying around for a few years now and it was just closest to hand when I packed my bag. I have to say, it was a joy to paint on. Not least because the paper is gummed down, enabling the application of very wet paint with the minimum of cockling. In the hot weather too, everything dried out very quickly which only led to even greater haste.

Speaking of haste – how’s everyone getting on with the 30×30 challenge? I must confess that much to my surprise, I’m really enjoying it. I think this can mainly be attributed to setting my expectations extremely low at the outset, and devising a manageable and containable little project. So far I’ve managed to do a miniature sky study every day. Not necessarily something worthy of bragging about but, I’m really enjoying both the discipline and the immediacy. Here are my first six skies of June…

…and a closer view of the three most interesting ones…

Subject to whatever the weather throws at us over the rest of the month, and me maintaining my enthusiasm, I think this has the potential to develop into a nice little series!

After initially planning this post around the watercolour reflections of the first painting (one of the more successful elements in my opinion) the main thing I’ve been left to reflect on is the need to paint with more of the immediacy and economy of these the sky studies and sketch in particular, which took minutes.