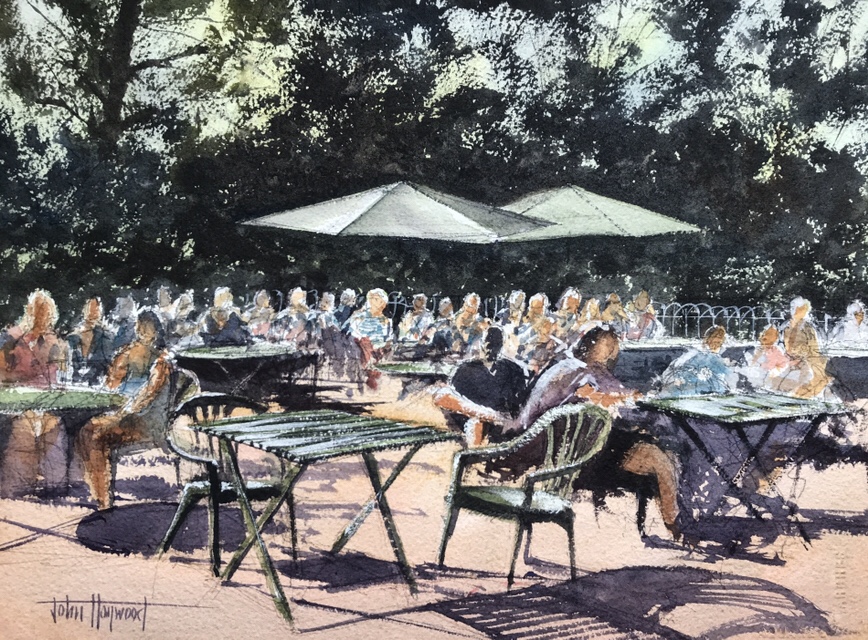 With the opening the Park Gate Collective Artists Open House only a matter of days away, I find myself slightly behind schedule. So much so in fact that this post will have to be super brief to enable me to get on with all jobs that I need to do.

Amidst all of the preparations, I’ve still been trying to keep my hand in with some painting. This painting is of a view that I’ve had the reference photo for a long time, but have usually been too daunted by its complexity to work out how to approach it. The setting is local to me, it’s the outdoor café in Brighton’s Pavilion Gardens.

I was particularly attracted to the strong contrast between the light on the parasols and the figures against the darkness of the trees and background foliage. Tackling such a complex mishmash of figures is always a bit overwhelming, but by really studying my source photo I tried to focus on the parts that were really ‘doing the work’. This was more about trying to isolate lights and darks rather than draw figures in any detail. This was always going to be about conjuring up a sense of a bustling café scene, and I felt I was more likely to achieve this through a loose indication of figures rather than trying to go into too much detail. I did a loose pale wash over the entire paper, only reserving the odd highlight. I then added in some light flesh tones across the heads and any exposed legs arms etc. My aim was to then add definition to these areas and shapes by negative painting in a much stronger tone around these shapes. As soon as I painted the dark foliage in the background and started to cut around the more distant heads, the figures began to emerge. I loosely applied lots of different colours and tones across the background areas to suggest different coloured summer clothes etc. After this I started to add some shadow areas, often painting negatively around shapes to give some definition, moving gradually from the background to the foreground.

Next was to move onto the foreground table and chairs. Again I wanted to keep these loose and fresh but, in retrospect, I should perhaps have spent a little longer on sketching these out as I think it may have assisted me painting them a little looser, and with greater accuracy. Once these elements were all done, it was a case of taking steps back from the painting to assess which areas needed more work, where any highlights might need to be added in or where any darker tones may need strengthening.

In many ways, I think this is a painting of two halves. The top half, down as far as the middle area of the throng of people, I really like. The foreground table and chairs, shadows and figures I’m less satisfied with. While I’m invigilating at the Open House I’m hoping that I may get time to do some painting so I may well have another crack at this scene. This will partly be for my own entertainment (I could be wrong, but I expect that there’s going to be some pretty quiet times!), and partly because I like to think it will be nice for visitors to see. I did paint last outside last year and really enjoyed the process and some of the conversations it sparked.

So, my final reminder and invitation before the official launch… should anyone be in the vicinity of BN3 1RL (Flat 28) during the month of May, we’ll be open every Saturday and Sunday from 11am-5pm and it would be a personal delight for me to meet any readers of this blog!