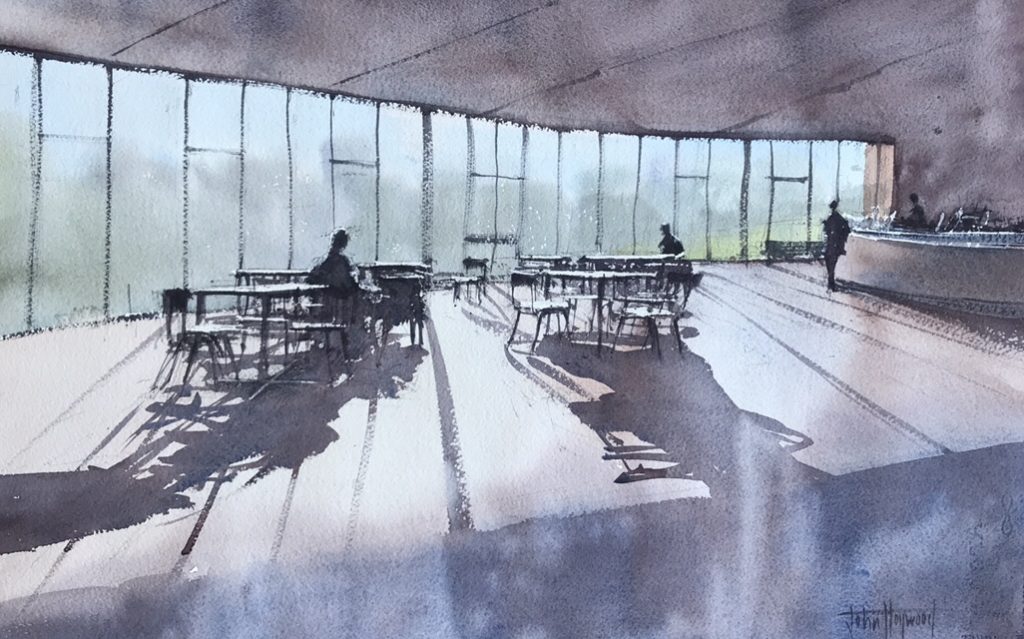 Watercolour painting without fear. Well, that was the theory!

The other week I spent quite a while painting a view that I’ve tried a few times before, but have yet to feel that I’ve  cracked it. Sadly, this remains to be the case. I reached a point where theoretically, it was about 90% complete, but I’d gradually been running out of steam with it for a while and I felt that I increasingly trying to ‘rescue’ a lost cause, rather than painting with confidence and freedom. I left the painting on the easel just so I could mull it over, but I had very little excitement at the prospect of returning to it.

So, there I was, doing a bit of washing up and listening to the radio as Will.I.Am was being asked what advice he would give to aspiring young writers. His answer did go off-piste a little but, at its core, was the sage advice to try to write without fear: fear of failure, fear of what anyone else might think, fear of one’s own limitations etc. If you can free yourself from fear, in whatever your pursuit, you’re much more likely to succeed. This isn’t a verbatim quote or necessarily an original one, but it struck a chord with me.

As I looked back at the painting I’d been working on, I realised that I wasn’t really that bothered about the painting. I was, however, much more bothered (fearful?!) about wasting a really good sheet of Arches paper! I decided there and then to do something I rarely do. I took the tape off the painting, turned it over, re-taped it, and committed to myself that I’d have some fun with the next painting because it didn’t really matter. I may already have ruined the paper, but that didn’t necessarily mean it was wasted!

I chose a photograph from a set of images that I took when visiting the Attenborough Centre for the Creative Arts at the University of Sussex. It’s one of the original University buildings, designed by Sir Basil Spence and recently refurbished. The café/bar area is a lovely open space with a curved panoramic wall of windows. On a bright day, at the right time, the light just floods in. I’ve had the photos for a while but never felt quite up to tackling the view. In considering it, I also realised that I rarely paint interiors. With the notion of freeing myself from fear running through my mind, I decided to throw caution to the wind and just have a go.

As I did the outline sketch, I was also working out how I might approach this. I think that the danger with interiors and architectural views is to tighten up in order to represent the straight lines, structure and order of a view. This view is full of lines, but I wanted to keep it loose; to paint it with a sense of spirit rather than a sense of it having been painted it with a spirit level! Looking at the subtleties of the play of light across the scene, I thought I could only capture these by painting very wet. There was also a tremendous amount of detail, lots of tables, chairs and their legs, everywhere. I knew for sure that those would need some serious simplifying. Here’s the outline sketch:

It was pretty quick to sketch this out and because I knew I wanted to paint freely, and very wet, I decided to use masking fluid to preserve some small highlights on the tops of tables, seats of chairs etc and along the top of the bar.

I started by painting the view through the windows, beginning with the sky and, while wet, dropping in some bluey-greys to indicated the distant trees. While this was drying, I started to mix the colour that I wanted to run through the rest of the painting. The base for this was mainly light red and burnt sienna which I knocked back with some ultramarine and cobalt blues and a bit of violet. I basically had a quite a lot of paint in the palette and was making it up as I went. Such was my impatience that when I started to put this colour in, the sky wash hadn’t dried completely and the two started to bleed! Bang went my ‘without fear’ as I rushed around looking for some kitchen towel to see if I could minimise the damage!  I was already planning that this needn’t be the end of the world as I figured I’d be able to rectify this when I came to put in the darker frame around the windows.

With disaster averted, I was able to get back to the fun bit of painting wet into wet. I painted clockwise across the top, down the right-hand side, and then across the floor area. Again, there was a lot of colour mixing on the paper and in the palette, still very wet, still very loose. It got to the point where the paper was so drenched and cockled that I just had to stop. You can see the light catching the buckled paper in this image:

The hardest or most frustrating part now was having to wait for this to dry. While waiting, I mixed up a dark grey consisting of yellow, Alizarin Crimson and Ultramarine blue. I was aiming for a much stronger and thicker consistency because this was going to be my base for the ‘dry brushing, of the window frames and bar area etc. I knew I wanted these to be dry brushed because I wanted a more suggestive broken edge rather than a definite hard edge. I also mixed up a large quantity of paint for the shadows, using mainly ultramarine, light red, Alizarin, and Violet.

Once the paper was dry, or at least dry enough for my impatience. I was able to start dry brushing in the window frames and all the detail around the bar. This was followed by the silhouettes of the people, tables chairs – all of which were done super quick and loose. Before these had dried, I started to work on all of the shadow areas. I had to take a bit of care with the long shadows from the window frames, mainly to get the correct perspective as the shadows ‘fan’ out. Again, this was all done quickly, with just some drops of clear water splashed into the main foreground shadow.

One this had dried, I took off the masking fluid, and just put in a few final darks to denote the edges of tables or chair legs if I thought they needed a bit more definition. I didn’t time this painting, but I’m pretty certain that I spent much more time waiting for the different stages of this to dry than I did painting it!

As a rare foray into the world of interiors though – I’m quite pleased with this. I’m also pleased that – despite feeling ‘the fear’ at times, I didn’t let it get the better of me! Here’s the final image:

Speaking of not letting fear get the better of us – midnight tonight (Wednesday 14 February 2018) is the deadline for entering the Royal Academy Summer Exhibition. It describes itself as ‘the worlds largest open submission exhibition’.  My fingers are firmly crossed for my own submissions – and my expectations set to ‘low’ – but I’d like to take this opportunity to wish anyone else that enters the best of luck too!

Thoughts on Watercolour painting without fear

20 thoughts on “Watercolour painting without fear”