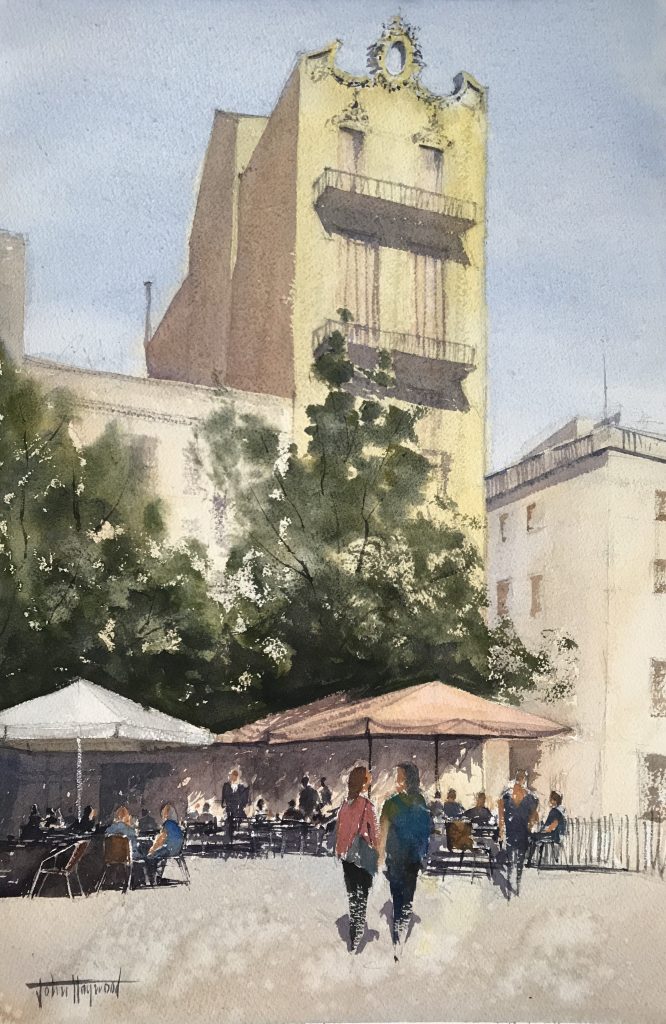 After my mixed feelings about last week’s painting, I was keen to see if I could rectify some of the most niggling elements. Here’s last week’s version of my sunlit Barcelona street scene as a reminder:

I was also keen to do a compare and contrast with the new supply of Arches 300gsm rough watercolour paper that I received recently. As I mentioned in my last post, I was nervous on receiving this paper as it feels so much more flimsy than the 425gsm Saunders Waterford Rough that I’ve been painting with for most of this year. I do however like the crisp whiteness of the Arches, and the paper feels as if it has a bit more tooth than the Saunders Waterford. I’m not sure ‘having a bit more tooth’ is a particularly technical term, but it feels rougher! I noticed this when sketching out this week’s painting as the surface of the paper seemed to blunt my pencil more quickly. Also, when I came to erase a few of the inevitable mistakes, the Arches wasn’t particularly co-operative or forgiving. The lead seemed to sit deep into the surface texture of the paper.

Sadly, in my enthusiastic haste, I totally forgot to take any work in progress photos but I’ll nevertheless try to describe how I approached this differently. With my first effort, I painted the sky towards the end of the painting, which meant having to cut around a lot of rooftop detail. It doesn’t show too much in the final painting, but the cutting around the edges affected the drying time and I didn’t end up with as smooth a wash as I would have liked. The second time around, I turned the board upside down and started with the sky, aiming for a graduated wash, lighter at the horizon and darker nearer the top of the painting. My plan then was to use a bit of kitchen towel to wipe away the colour from the buildings, especially the tall one. As a plan, this failed dramatically! Although the paper stayed damp for a long time, the blue really stained the paper and didn’t lift out as I’d hoped.

With only the sky washed in I was already despairing! I quickly tried to put a wash across the buildings, but did so far too impatiently as the sky hadn’t dried so there was lots of bleeding across what were supposed to be crisp edges into the sky. I was rapidly the opinion that the Arches paper wasn’t for me and that I’ve just wasted a lot of money. Thinking now, more rationally, it’s only natural that a significantly lighter weight paper will feel as if it’s staying wetter for longer – but at the time, I wasn’t thinking particularly rationally!

I washed in over the buildings and down into the foreground where I used a mix of raw sienna and light red. Then, while still wet, I put in a bluey-grey wash of cobalt blue and burnt sienna. The next significant area that I treated differently was the trees. On the first version, I loosely washed some clear water over the area where I want to the trees to be and then started splattering different hues and tones of yellow and green onto the painting. This seemed to go on for a long time, and became increasingly scattergun and the paint spatters began to cover the entire half sheet! The second time around I used a small mop brush and, mainly using the heel of the brush, quickly scrubbed in the trees, dropping in some darker pigment here and there for some extra depth. This is when the surface texture began to come into its own. It’s lovely for dry-brush style work and leaving broken lines etc. Once the trees were in place, providing some welcome contrast, I started to feel that this painting may not be a totally lost cause!

I can’t remember the order that everything else came in, but I think it started with the shadows on the walls under the sun shades then moving into the figures. I was conscious to vary the tone of these figures much more than I originally did in the first version. Also, in the first version, the highlights of chair legs etc were all added in with gouache at the end. This time it was a bit more mixed, with only a few gouache highlights added at the end, and others, such as the chair in the foreground on the left, were painted negatively, with the chair being defined by the darks around the chair, which provides a much more satisfying result.

The rest of it came together okay, probably as I relaxed into it more, plus I felt I was becoming more accustomed to the paper at the same time that I was working on elements that I think really played to the strengths of the paper. I was conscious of trying not to overwork areas, such as the couple in the foreground, even though I wasn’t completely satisfied with them. Sometimes the risk of losing the ‘feel’ of something for the sake of accuracy isn’t worth it. At the end of this, I still wasn’t completely enamoured with it. I did, however, think that the composition and the manner of the painting was an improvement on the first version. Also, considering I got off to a pretty shaky start on this one, I felt as if I’d pulled off a reasonable rescue mission:

Here are the two versions side by side for ease of comparison and, as ever, I welcome any other opinions besides my own on these two!

Oh, I should also mention that another concern I had about the Arches has been put to rest. For the time being at least. When wet, the Arches paper did cockle quite a lot more than the heavier Saunders Waterford but once it had completely dried out, it was ‘almost’ flat again. I’m certain that if mounted and with a backing board, it would be absolutely fine.

My next post isn’t due until after Santa’s been, so I’d like to take this seasonal opportunity to wish you all a wonderful, joy-filled Christmastime.