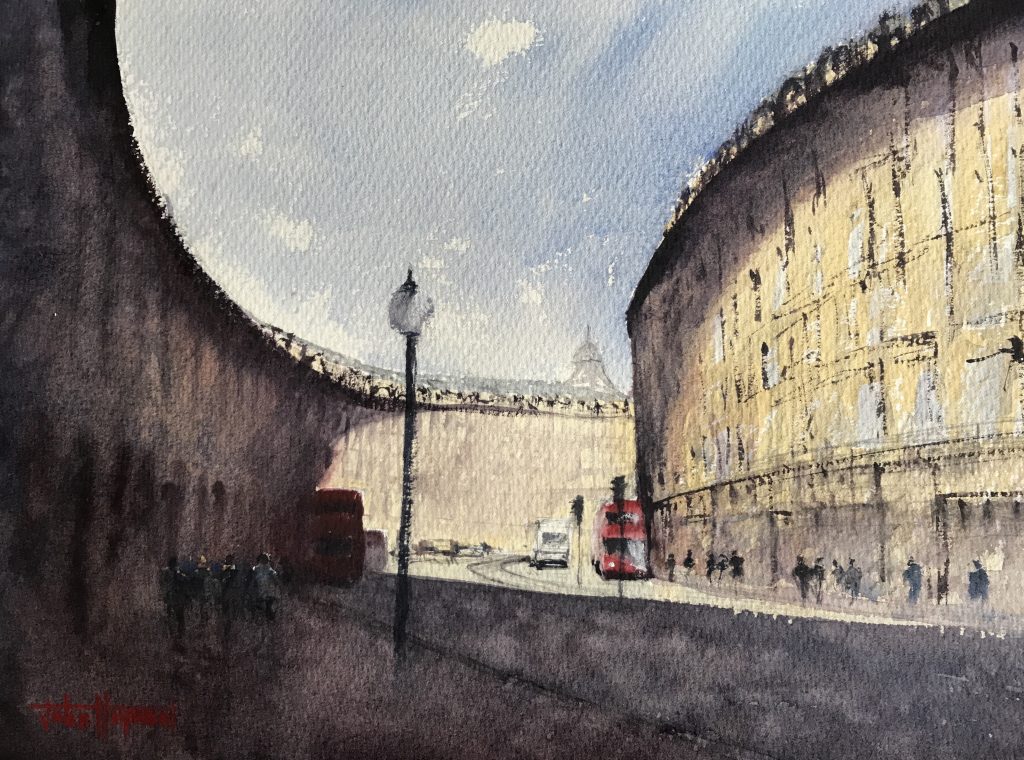 After so many good but ultimately futile intentions to track a painting’s development – I finally remembered to take some work in progress (WIP) photos as I went along!

My subject also marks a departure from my recent plethora of Barcelona images, and a change of format too. I don’t know why but most of my paintings for some time now have been portrait format, so moving to a landscape format felt quite strange.

The view is looking up Regent Street in central London. I had to be London earlier this year for work so took the opportunity to arrive super early and take a stroll through the city centre in the hope I’d get some good photos (and to have a little reminisce of the fun I had during the decade or so I lived there!)

There was a strong morning light which created some wonderful shadows that really emphasised the beautiful grandeur and sweeping curves of Regent Street.

So without further delay – here’s how I got on!

This outline is a little more detailed than usual but I was keen to ensure that my perspective, and particularly the elliptical curves of the buildings and shadows were accurate.

Early days I know but I was really pleased after this first wash!

Steady progress and still feeling okay. Notable too for my first take on not just one, but two London buses!

Strengthening the foreground and splashing on some water for a bit of texture.

Beginning now to add in some details to suggest the architecture.

Adding in the sky was felt like a dramatic game changer. I usually start paintings with the sky but I recalled watching a Herman Pekel dvd where he was suggesting that if it wasn’t ‘a sky painting’ – ie the sky wasn’t a major feature, that I could be washed in later to match the key elements. I’ve not really worked this way round but I think in worked on this occasion and I’ll definitely be asking myself in future what role the does sky play, how important is it and when would be the best time to tackle it?

At this stage I was still pretty happy with the overall feel, but thought that the foreground was a little too pale, especially near the figures on the left hand side.

After deciding to lay another deeper tone across the foreground, I think I slightly killed off some the painting’s vibrancy. I think this was either a wash too far, or just the wrong wash as it introduced a much more opaque, muddier feel to the foreground. It also signalled to me that it was time to stop, before I did anymore damage!

For a change of scene, I really enjoyed working on this painting. I felt that I was learning a lot as I went along, not perhaps in the grand scheme of things but in the ‘if I was doing this again…’ scheme of things. So much so that I’ve already started another take of this painting that I’ll hopefully show next week.

With my second effort, I’m trying to complete it more quickly, with fewer washes and to try to retain some of the colour and vibrancy of the underwash. I’ve done a first and second wash and am ready to start moving into some of the detail. Still plenty of time for it to go completely wrong and I’m hoping that previewing it in this way isn’t going to jinx it!

I’ve also been keeping some WIP photos of this one too so hopefully I’ll have something to compare and contrast in next week’s post!