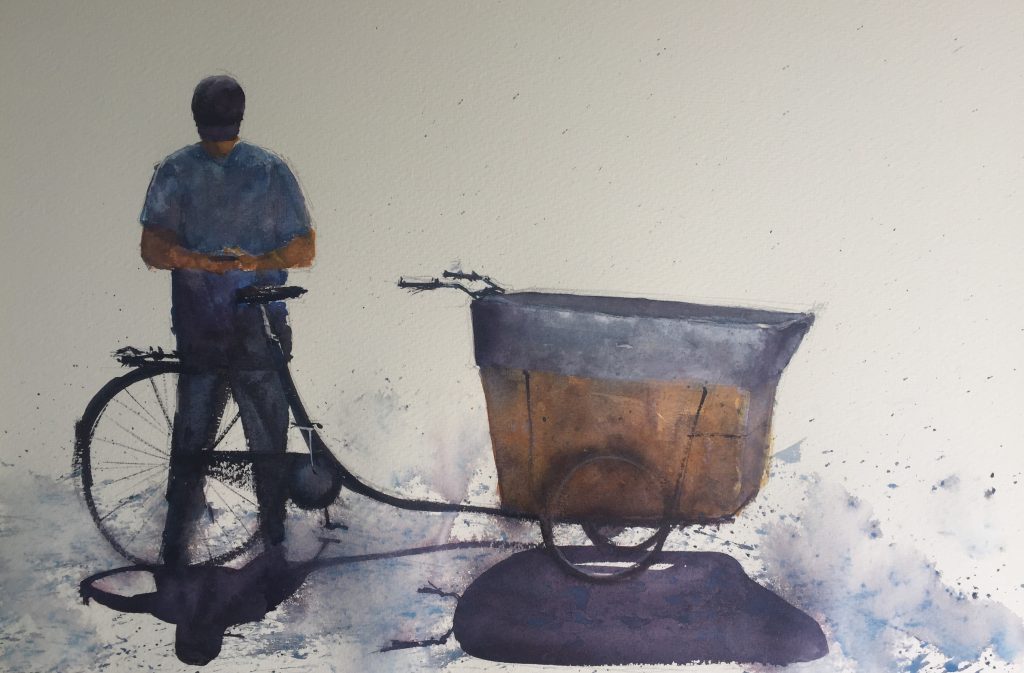 I suppose it’s been a long time coming but I’ve finally hit a watercolour wall of disillusionment!

For a few weeks now I’ve been struggling to get excited about my painting. Subject matters that I usually look forward too now hold no appeal whatsoever and when I do see an image or view – I can’t imagine that I’ll ever be able to paint it.

I think part of it is a crisis of confidence and what’s worrying is that I’m struggling to prevent it becoming a self-fulfilling prophecy. I’ve started a number of paintings recently and haven’t got close to completing them before just plain giving up. I think in part it’s because I’ve generally been painting a little less over the past few months as a couple of exhibiting opportunities have taken precedent. Also those opportunities provided me with a certain focus – I needed to have work to show. I don’t have anything else planned at the moment so feel am perhaps feeling a little aimless?

Despite me abandoning some of my recent efforts, I still think that I need to paint through this barrier, but maybe I need to shake things up a little. This sketch is my first effort along that path. It’s based on a photo of a delivery cyclist that I took when I was in Barcelona.

I still don’t like it, but at least I stuck with it until it reached some kind of conclusion! I decided to focus on a detail rather than a whole painting, to try to keep it ‘sketchy’ and to paint it big, so I could use big brushes and there’d be space for the colours to blend together and mix on the paper. Ha, so much for those best laid plans! The only thing that remained true to these aims was its size. It’s painted on a half imperial sheet. Aside from that, the colours are muddy, and the handling heavy and overworked.

As I painted, I imagined this courier was hanging around waiting for instructions or directions to his next pick up of drop off, which is just like I feel: waiting for some kind of instruction or direction as to what to do next. It really brought home to me how much my painting means to me, manifested by the heaviness of the cloud that’s hanging over me all the while that things aren’t going right.

Fortunately, we’re off on holiday later this week for a few weeks’ camping. Based on previous experiences, I never manage to squeeze in as much painting as I’d like to when on holiday but this year, that might not be a bad thing! I’ve decided to only pack some sketching materials, my Frazer Price palette box, a small selection of brushes and a couple of sketchbooks. We’ll be spending most of our time in the Loire valley in France so I’m hoping for some rather splendid landscape scenery which will be a complete and hopefully refreshing change of subject matter from my recent city based material.

I’m also completely open to any advice that anyone may have to help me out of this hole. What’s worked for you? Do you think my plans may work for me? Should I be considering anything else? Should I just pack it all in!?