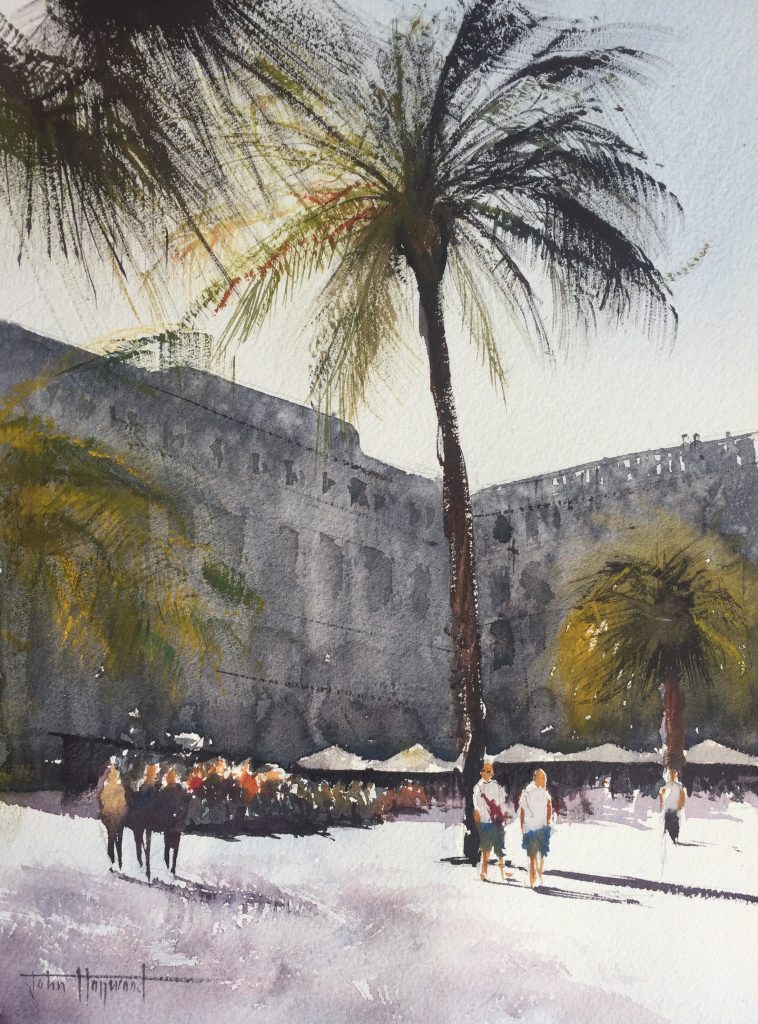 I haven’t been able to spend much time painting recently so was feeling decidedly rusty when I set about this painting. My rustiness – combined with my lack of experience of painting palm trees (I’m sure I’ve read something very recently about palm trees being the downfall of many an artist!) – meant that from the outset I decided that this would only be a quick sketch, just to get me back into the painting groove. I only did the barest of pencil sketches to map this out, and only really paid attention to ensuring the contrast between the key pair of figures, ensuring the one on left and was picked out against the tree.

The scene is the Placa Reial (or Royal Plaza), a beautiful large square in Barcelona’s Gothic Quarter. I passed through this square many times during our recent visit and managed to take quite a few photographs. I didn’t know exactly how I’d paint this at the time, only that it definitely had great potential as a subject.

I started with a graded wash of cobalt and cerulean blue, darker in the top right, getting lighter towards the left and as the sky moves down the painting. I then washed over a really feint wash over the foreground. By the time I’d done this, the sky had dried and I was ready to wash in the buildings, I mixed up a generous amount of ‘grey’ using a mix of French ultramarine , winsor yellow and alazirin crimson. I washed this in quite loosely, trying to cut around the main tree trunk and the umbrellas and all of the figures. I thought I may have gone in t little too heavy with this at first so splashed on some water to add a bit of texture and lighten it a little.

Next came a timing mistake when I tried to indicate the windows but tried it when the wash was far too wet so my efforts just dissolved! I left it all to dry whilst thinking about how to tackle the central palm tree. I wanted this to feel quite loose and painterly and really wanted to portray the play of light from left to right. I started by dropping in the trunk with a thick-ish mix to create some dry brushed varied edges, also being mindful to cut around the silhouette of the figure. Then, I worked quickly using a small fan brush with a long handle, sometimes using it ‘flat’ to convey the fronds of the palm leaves, and sometimes on its side for the thicker stems. This was mainly done as dry brush, trying to pick up a mixture of colours as I went to provide more interest. I also worked from left to right, from the lighter leaves to the those in the shade. I tried to work with the minimum of fussing, but looking at my reference photo closely to try to capture the ‘character’ of the tree.

I breathed a huge sigh of relief once I’d done this and was pretty pleased with how it had turned out. This gave me the confidence to tackle the remaining palm trees which I treated in a similar fashion but also did some more textural work with a rigger brush too.

After that, it was down to the details and figure work, the flesh tones were done using yellow, red and a little white, and everything else began to fall into place quite nicely. Once the figures were done, I added in some mauve-ish shadows and tried, in the foreground, to suggest the slightly dappled shadows cast by the palm trees. While I think this foreground shadow works, I doubt you could spot that it’s a shadow cast by palm tree!

For something that was painted so freely, and with such little expectation at the outset, I was really pleased with how this turned out! I think it has a nice play of light and a certain liveliness to it. After having felt a little rusty when I started painting this, I now can’t wait to start another one!