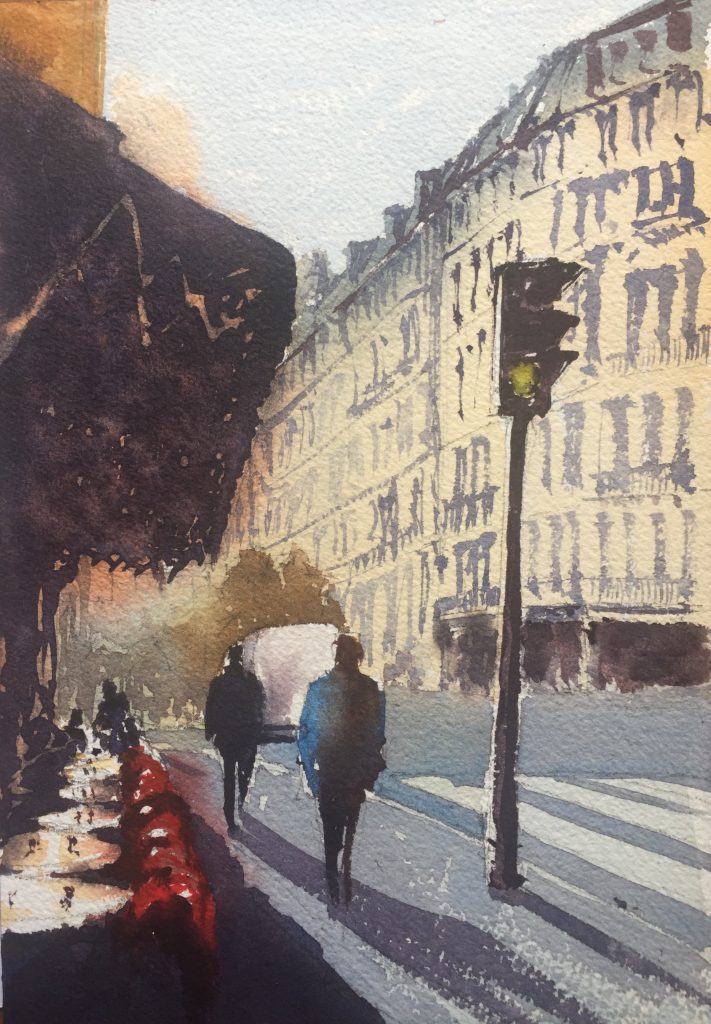 This will be a shortish post due to two factors. First off, time has been short so I haven’t had much opportunity for painting. Secondly, I’m still slightly speechless, and for the purposes of this blog wordless, following a visit to the Hockney exhibition at Tate Britain. This runs until the end of May and I would urge anyone that’s remotely interested that has yet to see it to book now – I promise you – you won’t regret it!

There were a number of things that really ‘made’ this exhibition for me. First off was seeing so many works that I felt so familiar with in the flesh. Since I first started getting into art at school (many more decades ago than I care to remember!) Hockney has always been held up as an example of greatness. Whether it’s the quality of his line work, his composition, his variety of approach, his endless curiosity, his artistic honesty and integrity. Without me being aware of it, he’s probably been one of the most influential figures in my art education.

To come face to face with works that I’m sure like many others, I feel especially close to, was an incredible privilege. Then there was the scale. I’m used to seeing small, often thumb-nail sized illustrations of his work. To see the sheer size of his larger works, and to be able to get so close to them was amazing. What really strikes you is that whilst in print, many of his works seem to be striving for a stylised photographic quality, in reality you see the painterliness of them.

Close up you’re also able to properly distinguish the differences between passages of painting that still seem very casual against areas of immense detail. I know it sounds strange but there’s a painting of a single eyebrow, within a very large canvas, that I can still picture quite vividly. There are also moments of complete calm in so many of his paintings, where the eye can rest. There were some rooms that I passed through without lingering too long, and others that I went back to two and in some cases three times! It really is a wonderful exhibition that has left me feeling utterly humbled, totally inspired and completely feeble too! All of which makes me feel quite embarrassed about having to reveal my own stumbling efforts.

As I’ve mentioned, time’s been short for painting this week but here’s a trio of sketches that I’ve been dabbling with. I sketched the first one of these out on the plane on the way back from Barcelona from a photo that I had from my trip to Paris last year. I did a pencil sketch first and then put in the darkest darks using a black pentel brush pen. Back at home over the weekend I applied the colours over the top. I was surprised how this came out as even though the black of the pentel pen is totally opaque, it still took on some of the colour from the watercolours which helped to soften it a little.

Sketch 2 was done over a loose pencil drawing and sketch 3 was done on a 10×6 Arches rough watercolour block. For this final sketch, I washed in a lot more base colour over which I then applied the darker tones over the top, trying to allow some of the initial washes to show through. All three were done pretty quickly and, as is so often the case, I really wish I could pick and choose my favourite elements from each to create my ideal version!

Here’s larger version of the third sketch which really shows up its rough and readiness but, of the three, is probably my personal favourite:

I haven’t decided yet but, having spent quite a bit of time getting under the skin of this view, I might try a larger quarter sheet painting of this view, or perhaps a more refined 10×6 version? I’d welcome anyone’s thoughts/preferences on this.

Thoughts on Humbled by Hockney

7 thoughts on “Humbled by Hockney”