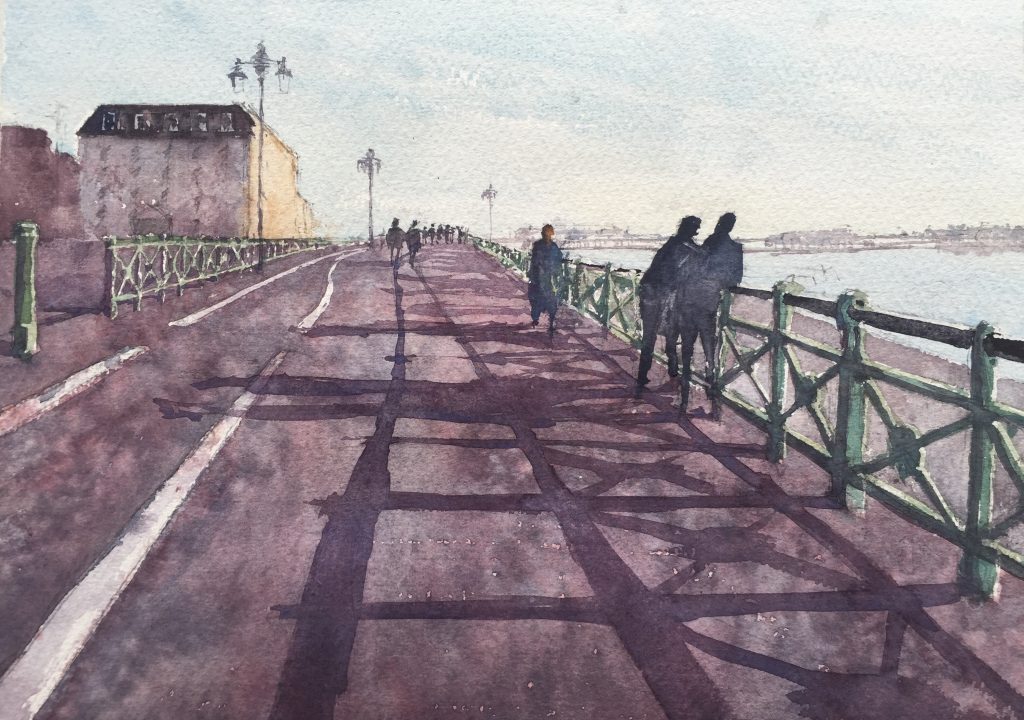 I recently treated myself to a couple of new brushes. I’ve tried out a fair few makes and types of brushes in my quest for the holy grail of paintbrushes, and have most recently gravitated towards Escoda brushes, which I’ve always found to be of exceptional quality. Well, I was recently followed on my instagram account by a company called Ocean i who are based in Hong Kong. I had a look at their website and I was attracted by their ethos and particularly drawn to their idea of combining the best of Western brush making with the best of Chinese brush making. The results that Ocean i have come up with is a sable hair ‘Tulip’ brush and a squirrel hair ‘Piccolo’ brush.

In a fit of extravagance I ordered both and a week later they arrived, beautifully packaged in individual presentation boxes. Here are a couple of images of the two together:

As I hope you can see, they’re beautifully made and each comes to a surgically precise point. They both feel great to hold and a wonderful feature is that each comes with it’s own protective cap for the brush head. This means that you could add these two to your travelling kit which I’m really excited about. The ‘tulip’ case comes off and can then be inverted and placed back on the brush handle to make a suprisingly comfortable grip.

Needless to say, I was very excited at the prospect of having a play with these so I decided that whatever my subject, I’d use only these two new brushes to paint with as opposed to the myriad of different ones that I usually end up brandishing during a painting!

This week’s subject was another view of Brighton – my second now! – this time looking West along the seafront promenade towards The Palace Pier. I was aiming for a fast(ish) and loose(ish) approach so only did a very basic outline sketch before starting. My main concern – or at least one of them – was how to simplify the complexity of the railings. I decided to paint negatively ‘around’ the railings and paint the railings later.

The whole thing progressed quite fluidly and I was generally quite pleased with the direction of this until….

It was pretty much finished but I had a slight reservation about the foreground area and the shadows of the railings which I felt needed some strengthening. Sadly I think this final wash was a little too heavy and make the foreground  too dark, heavy and overworked.

As it hadn’t taken me too long, I thought I’d have another go at this, trying along the way to rectify some other niggles (mainly the buildings in the background and the pier). Also I dedicated a little more time to drawing this one out, especially around the railings, and used a touch of masking fluid, just on the highlights, so I wouldn’t have to paint ‘around’ all the detailed areas as I had first time round.

I do think this is a significant improvement on the first effort. I think the pier, and the background buildings are all handled much more confidently, and that the foreground areas still have some transparency about them and aren’t as overworked as in the first painting. Overall I think the sense of light is portrayed much more convincingly in this second painting.

What I also liked however was that I feel like I’m gradually closing the gap between my first effort and my second effort. Often my first effort is too loose and inaccurate, my second accurate, but too tight, with none of the spontaneity of the first. With these two paintings however I could really sense that gap getting closer, each moving towards the other in terms of accuracy and feel. Who knows, at this rate, in another five or so years, I may only be doing one version of a scene!

As for the brushes well, they’re an absolute joy to paint with and a hugely welcome addition to my collection. Both hold a tremendous amount of paint whilst retaining their shape and their point and both feel great in the hand. I’m really looking forward to spending more time painting with these brushes. I can’t help thinking that they somehow encourage me to be more expressive with my mark making and I’m quietly hopeful that they’re going to really benefit my painting.

Follow John Haywood Watercolours on WordPress.com
PrevPreviousShades of Grey
NextLetting the bee out of the bagNext

Thoughts on Closing the gap

10 thoughts on “Closing the gap”