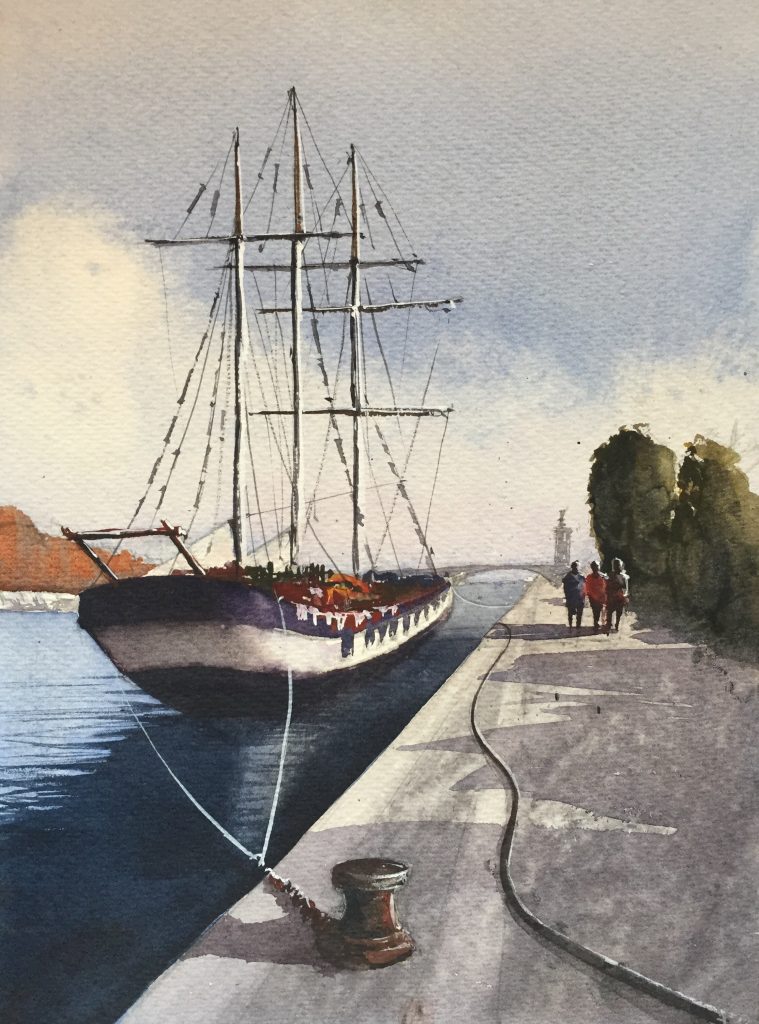 Before I get onto anything boat related, I first feel beholden to begin where I left off last week, with my trials and travails of painting a scene outside Notre-Dame. To aid comparison I’ve put below the my two efforts, the more recent and looser version first, followed by my first attempt.

Despite my best attempts to tackle this in a more free and spontaneous fashion – I became thwarted by my own limitations! I like some of the individual elements of this looser painting, but I think it fails overall. What makes the first one work – for me at least – was the distinct quality of the light, of the dark sky against a sunlit building, none of which I was able to recreate a second time around.

So much of what I was trying to achieve with this painting depended on judging exactly the dampness of the paper and, all too often I got it wrong. This led to colours bleeding together, which I’d then try to lift out, and then go back in again a little later. Elements became increasingly smudged and overworked. Conversely, I’d leave other areas too long, so instead of a soft edge, I ended up with a hard lined edge.

I think it didn’t help that I was trying to rush this as I didn’t have much time in which to paint. I found myself jumping about all over the place moving from one element to another, all the time trying to keep on top of the correct state of paint and paper. It really did end up like spinning plates but gradually they all began to crash around me! I wanted to stop about halfway through as I had lost my faith in the painting and my abilities to redeem it.

I still like this as a view and as a potential subject, but I think I’ll be leaving this well alone for while at least.

Fortunately, I was able to put this / these disappointments behind me and move onto another painting that I’d already done an initial sketch of and had already decided it merited a little more time and effort. I did the painting below in a rather hasty fashion (I did it partly as an antidote to the first Notre-Dame painting). I can’t tell you how hard I had to fight with this as I painted it yet, at the end, I thought it read quite well. (Again) I didn’t like the figures, or the fact that the masts didn’t fit on the paper, or that the perspective on the boat looked a bit squonky (my spell check assures me this isn’t a word, but I’m sure you all know what I mean!) – but I thought it had an interesting composition and a nice feel.

So, here’s my slightly more considered effort. At least on this one I managed to get the full height of the masts in!

Overall I think this is a much more accomplished painting. I do prefer some elements of the first painting, such as the sense of and the warmth of light falling across the quayside, the trees on the left hand river bank and the looseness with which the bollard is painted but the second version is, to my eye, better. The perspective works better, the sense of depth and distance, the sky, the figures, the cable in the foreground leading into the picture, the masts and the rigging are all a step up on the first sketch.

So after beginning this week’s endeavours on a slightly frustrated and despondent note, I was really pleased to be able to finish it in a more upbeat frame of mind!

Oh, getting back to the title of this post, if I did have a boat, I’ve very much like it to be like this one. And, if it’s not too much to ask, I’d also like for it to be moored here, on the Seine in Paris, just down from Le Pont Alexandre III bridge (which is just visible in the background!)

Thoughts on If I had a boat…