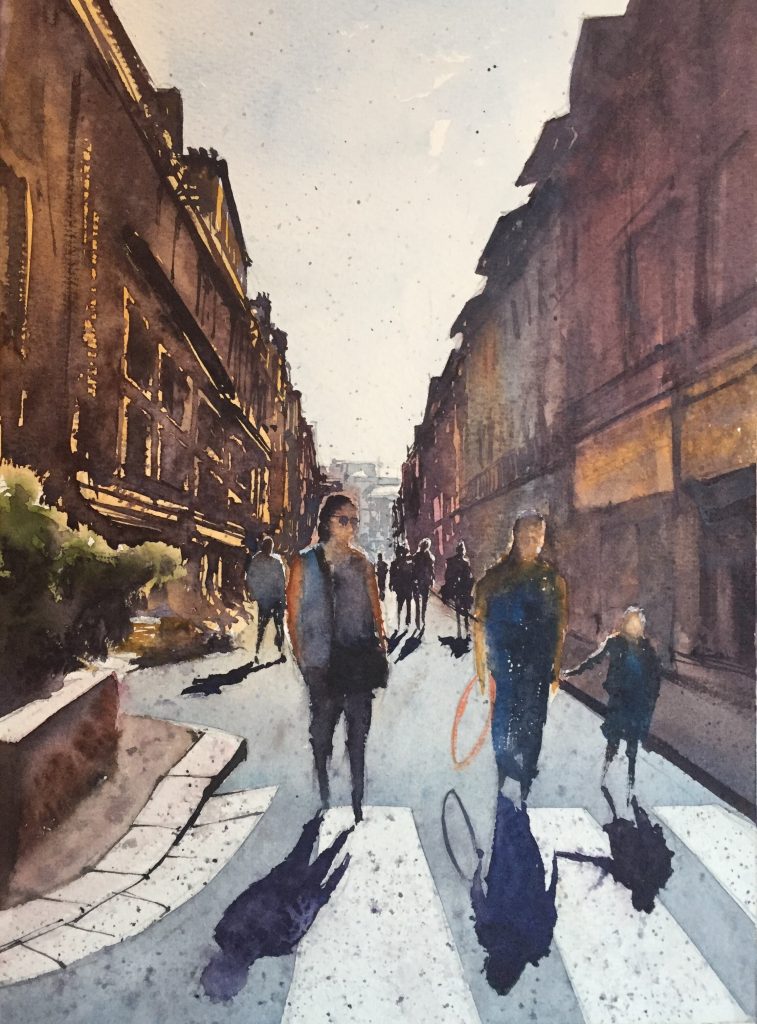 As predicted in last week’s post, time is proving a most valuable and hard to come by asset! Despite an entire week passing, I’ve only had time to watch about half of one of the three DVDs that I got for Christmas. I decided to start with the Herman Pekel DVD. I’ve seen Herman paint in a few of the APV films where he paints alongside Joseph Zbukvic. I’ve always enjoyed his manner and approach so was much looking forward to seeing him on his own.

As I say, I’ve only managed to dip my toe into this so far but I’m really enjoying it. I’d say that his paintings are more ‘painterly’ than many watercolourists – even those that describe themselves as loose/impressionistic. What’s stayed with me so far is his approach to laying washes. In summary, he views the first wash as the opportunity to lay down the colours across the painting. In subsequent washes, he builds up the tone working often in purples. This description does rather over-simplify it but it’s pretty much how he describes it.

With the little time I had to paint this week, I tried to keep this approach in my mind. Last summer, on the way back to the UK from the South of France, we had the good fortune to arrive in Dieppe on the day that the streets are given over to a huge market. The old town is closed for traffic and people set up set up their stalls – usually just on table tops or blankets on the ground – and sell all manner of household bric-a-brac, antiques and other curiosities. It was a great, almost celebratory atmosphere that left me completely smitten with Dieppe!

I took quite a few contre-jour or ‘into the light’ photos, one or two of which I’ve long had in mind to try to paint. I really liked the composition of the image below, with the lines of the zebra crossing leading into the picture, the strongly backlit figures and the shaded or bleached out architectural details. My first wash for this was quite vivid by my standards – I had Herman Pekel’s words that the first wash should all be about colour ringing in my ears, but I thought at that stage that everything looked quite promising.

Unfortunately, as I applied subsequent washes, I lost most of the underpainting, and with it the sense of vibrancy. In his DVD, Herman does stress the importance of trying to keep some areas of the first wash visible if possible – it’s just that in the main, I failed in this regard.

Perhaps because this was my first painting in a while too, I felt a bit tight and nervous. I think I also felt a bit hampered by the foreground figures being too large and dominant for me to tackle confidently. So instead of trying to paint them quickly and loosely, I felt the need to try to introduce some detail and ended up fiddling way too much. Similarly, the background figures are painted too strongly, which makes them too dominant and distracting.

Despite all of the failings of this attempt, it felt great to be painting again and I like the overall direction I’m heading in. With this particular painting, I learnt a great deal and think that I’m going to redraw this, making some tweaks to the composition, and to the order in which I complete the painting to see whether I can improve on this effort.

Thoughts on Bright Day in Dieppe

5 thoughts on “Bright Day in Dieppe”