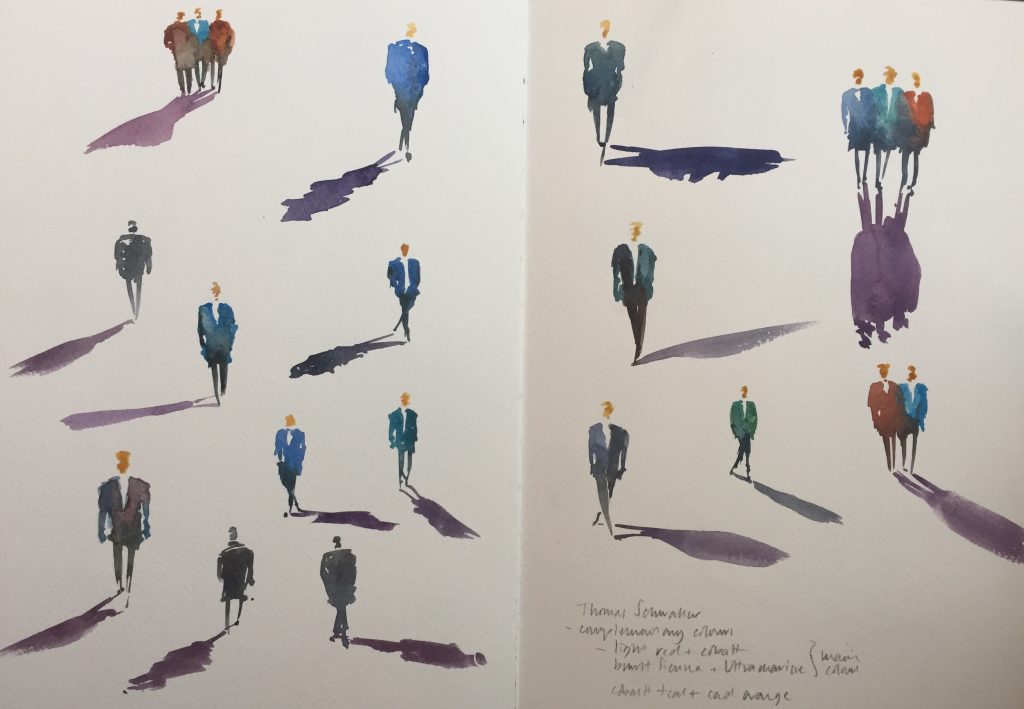 As many regulars will have heard time and time again, I’d like to feature (or at least include!) figures in my paintings more often. Partly to give a sense of scale, partly for the added visual and human interest they can bring to a painting and partly just to prove that I  can! I have gradually been working towards this but over the past week, and more by accident than by design, I’ve been focussing on figures with a little more determination.

One reason for this is that I’ve watched a couple of really helpful videos. The first of these was a short 7-8 minute video on how to paint figures by the brilliant Trevor Waugh:

I really liked the clear and simple approach to purely practising the painting of figures.

The second video that I’ve watched a couple of times is by another great watercolourist, Tim Wilmot:

This is a longer video but I found it really helpful as it focusses on a number of different sized figures within a complete painting and shows how Tim tackles each of them and the considerations at play.

Again, you can see more of his great and insightful videos on Tim’s youtube channel.

Watching these has coincided with the nights drawing in and wanting to somehow keep painting, even if not in the manner that I usually do, ie. standing up at an easel and trying to start and finish a painting in a single session.

This has all led to me taking out my sketching palette – the lovely Frazer Price palette one that I got a short while ago – and a small sketchbook,  I’ve been using an A4 and an A6 sketchbook and just doing figure doodles. I’ve really enjoyed it and after only a few pages of doodles, I could feel myself getting more confident and expressive with my figures.

Granted, they’re only suggestions of figures but hopefully, as I become more confident at sketching them out, I won’t be as tight and hesitant when I come to actually include some in a more worked up painting. Here’s a little slideshow of single page and double page spreads from the A4 sketchbook to give a sense of how I’ve been getting on:

I’ve got pages and pages of similar studies in an A6 sketchbook but to be honest, once you’ve seen a few pages of these, you’ve probably seen enough. These exercises are purely for my benefit but hopefully I’ll be able to introduce some figures into more complete sketches soon. In the meantime, I’ll be doing some more of these studies – rarely have I found figuring something out to be quite so much fun!

Thoughts on Figuring it out…

6 thoughts on “Figuring it out…”