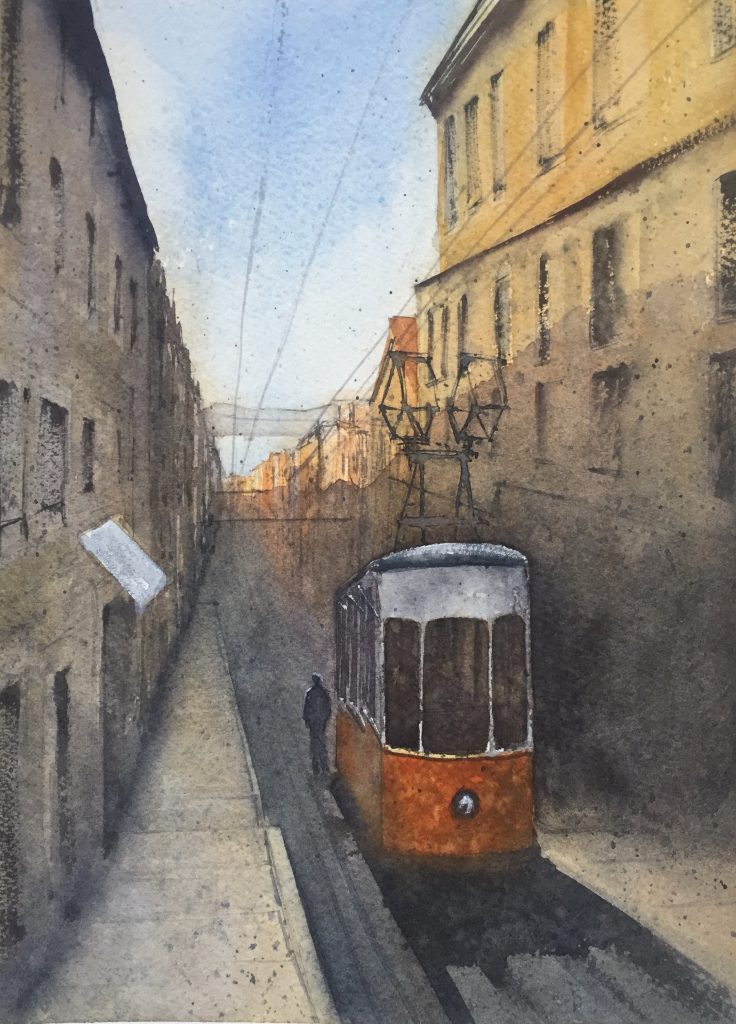 You wait ages for a tram…

… and then along come three all at once!

This wasn’t my intention. I’d only ever intended to do one version of this but as ever, the failings of one led to another… and then another…

This image is my photo of a photo – hence the appalling quality – of a Lisbon tram, (although it does come complete with authentic paint splashes!). This was  taken when I was there some nine or ten years ago – a long time before I even considered picking up my brushes again! Nevertheless, it’s long been an image that I thought could make a painting from – even if the three attempts that follow never quite achieved what I had in mind!

I turned to this image after a few weeks of not really having spent much time painting at all, which was probably very unwise, but also a positive indication of how much I was looking forward to getting some time at the easel – I really wanted something challenging that I could get my teeth into.  The first two images below are both on half imperial sheets of paper.

I quite liked bits of this, mainly the sense of light falling on the right hand side buildings – and the tram itself has a certain looseness to it which I like…. but I felt I could do this image more justice.

I spent more time drawing out this second version, which in one sense was good, but in another, it led to me being very tight when I painting it. Again, some bits I liked, but again, still didn’t feel that I’d captured the likeness that I was after.

After looking at these larger versions over a couple of days, I wondered whether the scale of them was serving the image well or not, so thought I’d try to take everything I’d learned so far and channel it into one final attempt, but this time on a quarter sheet. And this time, I thought I’d try to keep a track of the various stages. DISCLAIMER: the steps below should not be viewed as any form of instruction… they’re just the steps that I took… and as they didn’t deliver quite what I’d hoped for, probably shouldn’t be followed in any shape or form!

Whilst I think this may the most complete of the three – I don’t hold any of them in particularly high regard!

I like bits of each of them but the most important thing – which probably isn’t recognisable in these paintings, is how much I enjoyed being back at the easel and how much I feel I’ve learned in tackling this subject. I envisage myself doing more town and city scenes, and more work with figures, so these have been great steps towards that goal. I think one of my takeaways is to focus on the balance between the accuracy of the original drawing and ensuring that the under drawing doesn’t inhibit my painting.  These three all have a certain heavy handed overworked quality that runs counter to the more loose and direct style of painting to which I aspire.

I think I need to seek out something purposefully loose next so I can shake off the shackles!!

Thoughts on You wait ages for a tram…

2 thoughts on “You wait ages for a tram…”