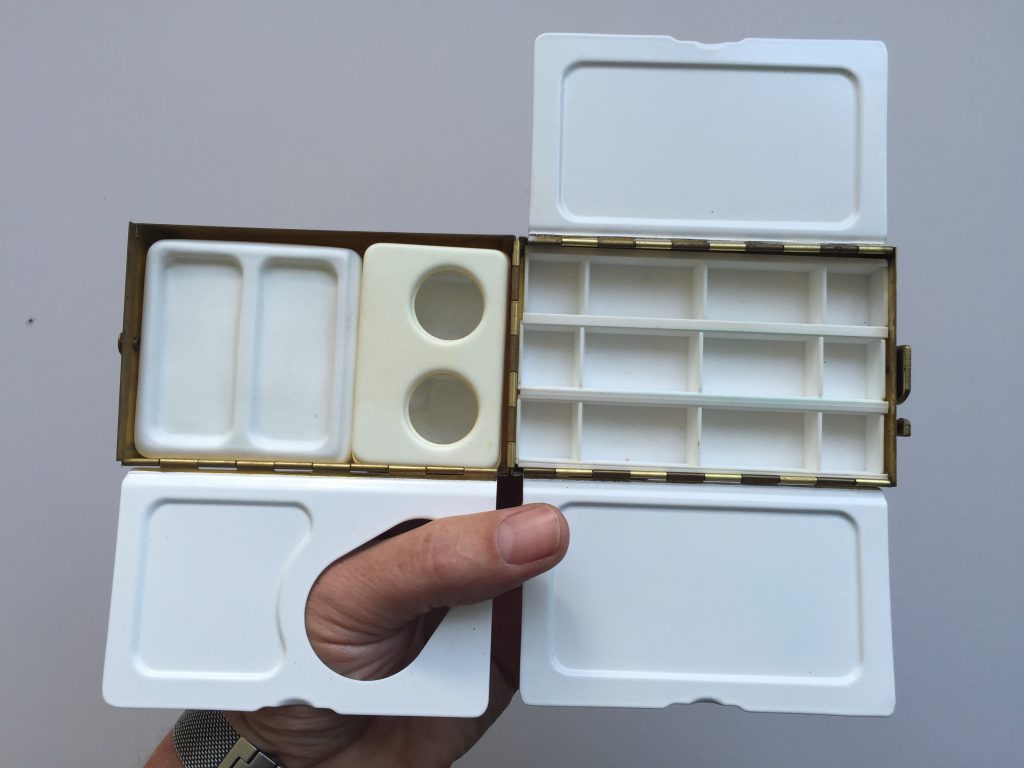 I came across the Frazer Price Palette Box quite accidentally and had never heard of the make before. The fact that it was brass, boasted enameled mixing surfaces, and was like nothing else I’d seen before certainly got my attention – especially because I know how highly regarded and renowned the brass palettes of Craig Young, House of Hoffman and John Hurtley are.

At the time of writing this post, I had little idea of quite how much interest there may be in the Frazer Price Palette Box, and this page continues to evolve as I learn more or add new content. In response the many visits to this page and the inquiries I receive about the Frazer Price palette, I hope that the addition of a little video introduction will be helpful.

Below is my pictoral step by step opening of the Frazer Price Palette Box:

The box comes complete with it’s own water wells, one for washing brushes out, one for clean water and, the two mixing areas next to the water wells, are depressions on the side of a small water container.

All in all it’s a beautifully made and well considered item. Despite much searching, I could find out very little about this until I stumbled across some links that took me to a discussion on ‘Painters Online’ – where Frazer Price himself had posted the following information:

I have recently read the group’s comments on palette boxes and mention was made of the Frazer Price Palette Box – probably time that I enter the forum as I am Frazer Price. I designed and had the box manufactured, in Shropshire, and first came on sale in 1985 and continued to be marketed until the early ’90s.

The box came into being because of my frustration with what was available for the travelling watercolourist. I was a publisher and whilst I was travelling extensively for Newsweek I would find time to sketch in one country before spending endless hours on my way to the next port of call and decided my time could be usefully spent by painting on the plane. I had a Gabbi box which was Ok but with only a curtain ring as a holding device it was uncomfortable. Therefore, over time, I designed a lacquered brass bijou type box just over 4″ long, under 3″ wide and 2″ deep. The inside pieces were made from washable plastic with room for 18 half pans or with slides for paint from tubes, a water bottle and a divided reservoir for clean and dirty water. Two fold out enamel mixing trays one with a thumb hole enabling the box to be held comfortably as as a palette. It was launched in the Leisure Painter in 1985 and the advertisements had an endorsement by Rowland Hilder-the only time the great man endorsed anything- the selling price was £28.95 and with a couple of price increases it was marketed until ’93/4 selling over 5000 boxes worldwide. It was also branded and marketed by Talens and Daniel Smith in the States.

A point of interest when the box was first produced- the prototype costing £1,400.- I offered it to Windsor and Newton who initially showed great interest but then pulled out as they considered the box too ‘glamorous’ but asked if I would mind if they produced a plastic box based loosely on the FP box. I had no desire to go into mass production – hence the Cotman box arrived on the scene.

If any of you have archive copies of Leisure Painter you might read an excellent critique by Ray Campbell Smith in the December ’85 issue.

All that’s left now are a dozen boxes for the grandchildren and posterity. All my painting comes from the Frazer Price Palette Box and if you have the time click onto www.frazerprice.shutterfly.com and you’ll see it at work!

I hope this answers some queries and thank you for getting to this far.”

The one I purchased was still in its original box, and with its original receipt – indicating that it had been purchased for £35 (reduced from £39!)- which would suggest mine was one of the more recent early 90s models, but still over 20 years old!

In a 1996 edition of The Leisure Painter, I stumbled across one of the original ads:

Needless to say I’m chuffed to bits with this wonderful piece of craftsmanship and watercolor memorabilia. I was initially torn between using this, or just putting it out on display somewhere… but that really isn’t in my nature! So far I’ve filled it with paints and have done some little exercises in an A6 notebook, so not a proper road test, but it feels great to hold and the enameled mixing surfaces area a joy to mix on.

I’ll hopefully be able to use it more thoroughly in the week’s ahead but in the meantime, I’m really excited about this new palette addition. Who knows… it might be the last one I need to make!

I would love to hear from anyone else that has one of these, or if anyone’s seen anything similar, or just to find out what your favorite palette is?

I try to keep a close eye out for these Frazer Price palettes on eBay. Partly in the hope that I may be able to pick another one up at a bargain price and partly just out of interest to see how much they sell for/how much people are willing to pay for them.

As in all things – condition is hugely important but, even taking into account the excellent condition of one that I recently saw on eBay – I was still surprised to see it fetch £235.00!

June 2021 – Product Update – The Frazer Price Palette is back!

As far as I can see, this new version looks identical to the original version with the exception of the pans for the paint. The new remake comes with a tray into which you can slide either individual half pans or full pans, which offers the ultimate in flexibility. The original versions came with three individual trays, each featuring two full pans and two half pans.

Here’s the video that Jacksons Art Supplies have created to accompany the relaunch:

On the one hand, I’m delighted that this has been reintroduced. It’s a wonderful product that I imagine many watercolour painters and enthusiasts will love to paint with one. I also think at this price, has the potential to hit a real gap in the market.

On the other hand, however, it means that the value of my own personal collection of them will plummet overnight!

Deep down, I’d love to think that my championing of the Frazer Price Palette Box – every year, this page alone is one of the most visited parts of my entire site! – has in some way contributed to resurgence of interest in this wonderful palette.

My idea was to create a single large mixing well out of a small enamelled pie dish. I had already bought one of these some time ago so all I needed was some time and a bit of consideration as to how to do it! I had intended to document this process more thoroughly but, as it was, I got a bit carried away and only thought about photographing it when I was pretty much done and dusted with it.

Here are a few images however that I hope will make it clear! I first secured the pie dish to a piece of wood that I could in turn secure onto a workbench. I then took my trusty angle grinder armed with a fine cutting disk and set to work.

I’d already marked out the pie dish by sitting it into the palette, drawing a line around the palette and then using masking tape to mark the line that I needed to cut along. The main challenge was that I was trying to cut a straight line when the pie dish was curved in three directions!

After much cutting, re-cutting, grinding and finally a bit of filing to smooth off the rough edges, I eventually had a dish that fitted into the palette. It wasn’t perfect, but I figured that with the amount of thought and time I’d put into this so far, I had to see it through!

As you can see from these images, there was a little bit of a gap here and there, the some of the enamel has been chipped in the cutting process but I thought that I could patch up all of this with some carefully applied silicone:

I’ve only been able to use this a few times since completing it and so far, it’s great! It feels wonderful to mix paints on this surface and it’s big enough to cope with larger brushes and significanlty more water that anything I’d been able to do previously.