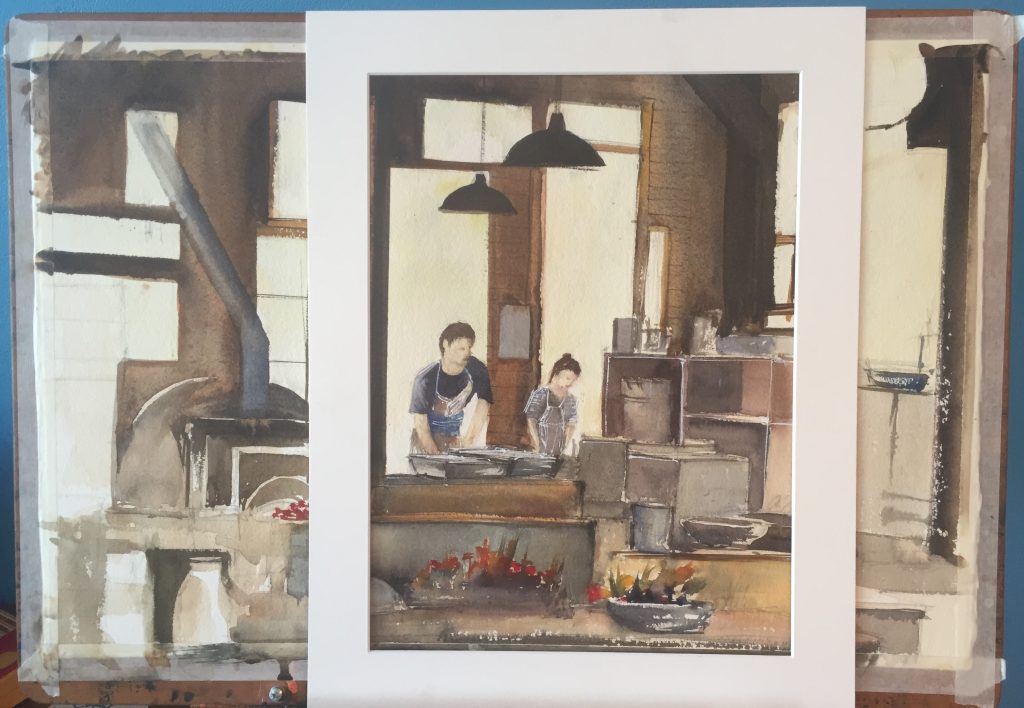 Desperately seeking the picture within a picture… or a cloud’s silver lining?

This post is intentionally brief. Partly due to pressures of time, but moreso because there’s only so much wallowing in self-pity I can indulge in!

Feeling buoyed by last week’s efforts, I felt bold enough to take on a scene that I’ve long wanted to paint but never felt up to. Last year we camped at Rettorick Mill campsite near Mawgan Porth in Cornwall. One of the unexpected highlights of our stay was an old barn that had been converted into a bar / restaurant, but in a characteristic and slightly ramshackle fashion. What wasn’t ramshackle however was the amazing food that came out of the open plan kitchen that was situated at one end of the converted barn. It was run by a tremendously hard-working couple, Scott and Babs; Scott in the kitchen and Babs front of house. Light flooded through a hotchpotch arrangement of windows and doors that ran the full height of the barn whilst a few dedicated chefs prepared the most amazing food that people travelled from far and wide to savour. It was great to seen them at 7.00am with a local fishmonger choosing the lobsters and crabs for the evening meal – or the fresh poultry that would be slowly barbecued outside over an enormous arrangement of halved oil drums. It was truly wonderful to see how passionate they were about their food, and humbling to see how hard they worked to prepare it for people’s enjoyment. Over the course of our stay, I took dozens of photos and did quite a few pencil sketches to try to capture this scene. Pictured below are the three reference photos that I decided to work from for my painting.

The only changes I really made when composing my painting was to try to position the figures against the light to get the best contrast. Aside from that, I set out to capture the overall scene of the everything that was in the photograph, and especially the strong light and the frenetic busy-ness of this amazing kitchen.

I drew this out on a half imperial sheet of paper. Even before I’d finished sketching it out I was beginning to wonder whether I’d bitten off more than I could comfortably chew! Long before I’d reached the stage shown in the painting below, I’d already decided that I was flogging a dead horse and had tried to concentrate my increasingly futile efforts on the central area.

Sometimes I find it hard to know where to begin with my own debriefing on a painting. On this occasion, I think my main takeaway is to make sure I’m looking for what matters. What’s really telling the story. I was seduced by all the clutter – but what I actually needed was to look for it’s simplicity. The more I worked on this, the more I realised that I was trying to fill the image with periphery details. I’d long realised that this was going to be an exercise piece – but I was deeply frustrated that I’d had to spend so long on a glorified sketch!

I had a spare mount lying around and started to use this over the image to try to find a detail, a different crop, a silver lining…

I’m sorry if this week’s post feels a bit doom and gloom. It’s not un-remittingly negative. I liked little bits of this painting, the fruit bowl for instance, or some aspects of the main figure, but overall, I’m glad to get this one off the easel and tucked away out of sight.

With more practice, and more consideration, I like to imagine that there’ll be a day when I return to this subject. But I doubt very much that it’ll be any time soon!

Follow John Haywood Watercolours on WordPress.com
PrevPrevious﻿Flying solo
NextMending the nets (or 241!)Next

Thoughts on Desperately seeking the picture within a picture… or a cloud’s silver lining?

9 thoughts on “Desperately seeking the picture within a picture… or a cloud’s silver lining?”