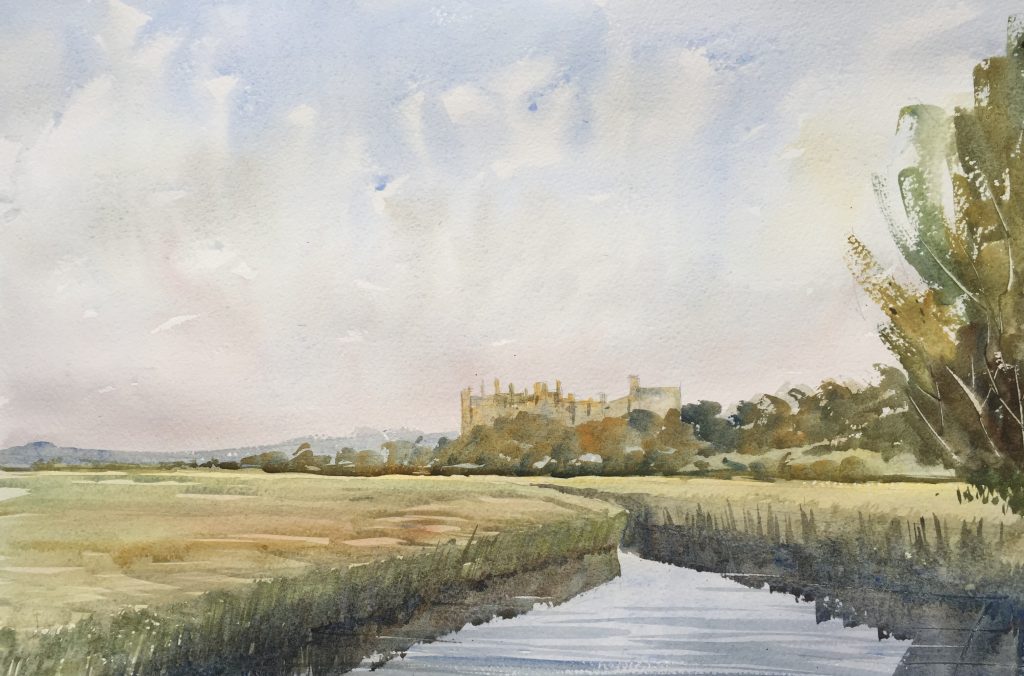 First the feast, then the famine

I’m not getting all overly allegorical or anything but, after spending a wonderful week painting solidly, I’ve barely had the chance to pick up a paintbrush since. All of the marvelous painting momentum I was keen to maintain has, instead, nigh on ground to a halt. This has without a doubt been partly down to circumstance, I just haven’t had much time to be able to devote to painting. Perhaps of greater concern though has been a slight lack of motivation. I’d been aiming for the week’s course with Steve Hall since January this year and, now that it has passed – I felt a little all at sea. Also, after painting outside for a week, I’ve been reluctant to settle for a return to my library for inspiration.

So all in all it’s been an artistically odd week. My notes to self are however still ringing in my ears so one thing that I’ve done is, like all skilled practitioners in their field, blame my tools! Well this isn’t strictly true but, in an effort to address some of the muddiness of my colour mixing, I thought I’d try a change of palette. It’s not that I don’t really like my Barry Herniman Cloverleaf Paintbox, but I’m sure I read somewhere about watercolour behaving slightly differently on plastic to an enamelled surface. So, with nothing to lose, I dug out my old Holbein 1000, gave it a good wash down and soak to remove the old paint, and replenished it with new supplies.

I must confess that even with my expanded selection of colours (this palette features just about every colour that I own) the colours do look a little sad and lonely. Still, it’s always nice to have some room for expansion. What is great are the generous mixing wells and, whilst I do love my coverleaf paintbox, there’s a discernible silkiness to the way water and paint moves around on an enameled surface. I also get very excited when faced with such a pristine looking set up! So, there I was, all tooled up and ready to paint… but what to paint?

I looked over some of the paintings that I did outdoors the other week and decided that I’d try to improve on some of them. On day three we stationed ourselves at the Black Rabbit pub on the river Arun that affords a lovely view along the river towards Arundel Castle.

And a close up of the same painting:

The sky was quite flat on the day we painted which didn’t really help. What did help was painting bigger, on half imperial and really letting go with a large brush and lots of paint. I really enjoyed the freedom that this afforded. The composition is very simple and while I did like elements of this first effort, I really struggled with portraying the tops of the reeds on left hand side. I finished this with enough time to have another go and already had a quarter size imperial sheet of paper already taped up ready for painting.

I still didn’t cope well the tops of the reeds, but i did prefer the foreground trees on the right of the page with a some scratched out trunks and branchs and some good tonal range.

I thought that these two together should be sufficient for me to have another go in the comfort of my home. (Cup of tea, small child running around the place, radio blaring etc etc). So, armed with my ‘notes to self’ and with my preliminary sketches to hand:

I tried to keep the colours ‘cleaner’ and and to ensure that my first wash, that went across the whole of the paper, was very light in tone. I was quite pleased with this – but moreso, it just felt great to be painting again. Also taking from my notes to self, I painted this standing, with my easel slightly lower than usual and concentrated on holding my brushes much higher up the handle, and not over-mixing my colours. If fact, for such a simple painting, I was juggling a whole load of notes to self!

As I had so much fun doing this, but still felt I could do better, I did another version. This time I was keen to get a greater sense of distance. I put in a very gestural sweep of blue grey to indicate some distant trees / hills on the horizon, and made the castle ‘sit back’ a little further into the landscape too. I think there’s a vitality to the foreground tree, although I did mess this up a little as it’s supposed to be much further away that it appears here. I also got the perspective of the river wrong, it’s much much wider that I’ve made it look here.

I think both of my ‘At home’ efforts are ‘cleaner’ and livelier in colour, which is something that I was definitely aiming for. I’m not really pleased with the castle in any of these, and don’t think that I’ve really managed to improve my first on location effort. I also feel that the portrayal of the tops of the reeds is much more successful on my later attempts but could still be improved upon.

In fact, the more I compare these four attempts, my main conclusion is that I’m definitely not finished with this subject matter – so apologies in advance! You will be seeing this view again at some point!

In the meantime, I’d welcome any thoughts on whether my later attempts are an improvement, or if what they gain in a cleaner use of colour, is mitigated by a slightly more constrained or less gestural use of brush strokes?

Hopefully, over the coming week, I’ll be neither feasted nor famined but perfectly replete!

Follow John Haywood Watercolours on WordPress.com
PrevPreviousNotes to self following a fabulous week of painting
NextPicking up from where I left offNext

Thoughts on First the feast, then the famine

3 thoughts on “First the feast, then the famine”