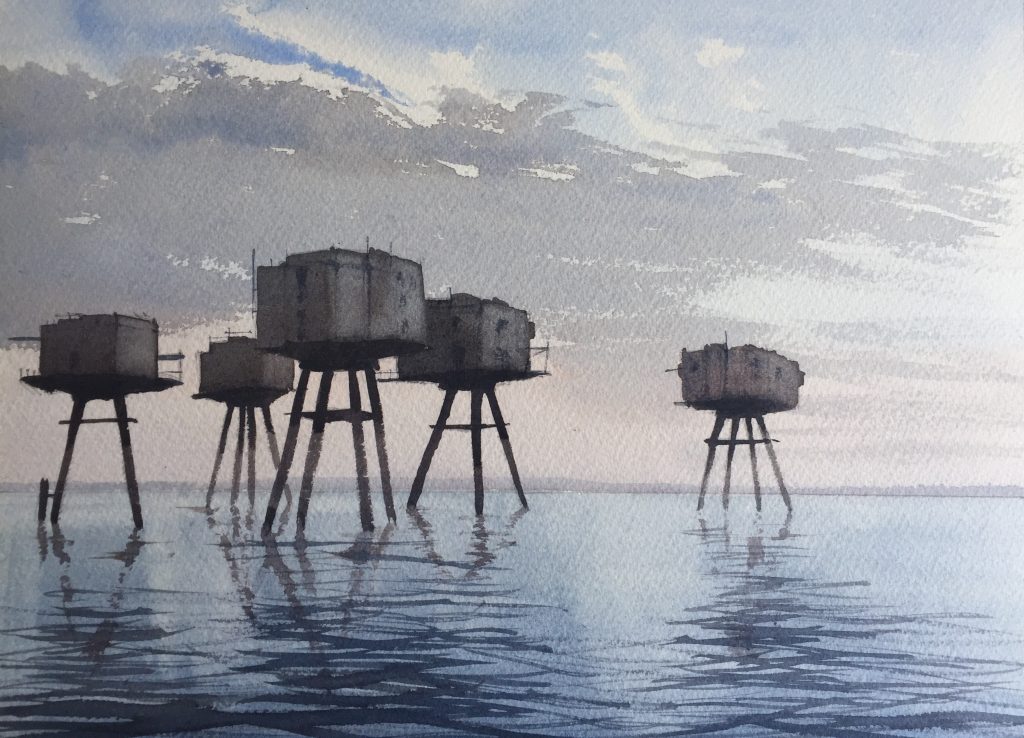 For this week’s post I’m indebted to watercolour artist David Harmer. David was recently inspired to take on a most unlikely watercolour challenge – to paint the Maunsell Sea Forts, named after their designer Guy Maunsell, in the Thames Estuary. These amazing structures were built during the second world war with the primary aim of defending the country from air attack, especially by bombers that would use the Thames estuary as a means of navigation to reach London.

Each fort comprised of seven structures that were linked by walkways. Built in harbours, they were sailed into place on concrete barges that were then sunk onto the sea bed. They are now derelict hulks, visual curiosities that remind us of the terrors of our not too distant history.

After taking a boat trip out to see the forts, David took it upon himself to tackle this subject in watercolour. Almost a decade ago now, I used to live in the coastal town of Whitstable, where one of these sea forts was clearly visible from the shore, along with the more recent addition to the horizon of an off-shore wind farm. Like David, I had many years ago taken a boat trip out to get a closer look at these monolithic relics and learn a little more about them. Reading David’s blog brought these memories, and those of my time in Whitstable, flooding back to me and before I knew it, I was contemplating a companion piece to David’s work.

You can read about David’s journey with this subject matter by following the links below, which I hope are sufficiently descriptive:

I started my own journey with this after seeing David’s preliminary sketch. I was keen to portray some sense of the strange sense of majesty of this structures as they seemingly stride across the sea. Fortunately these are much photographed, so there’s plenty of reference material available. After much looking around, I decided to base my painting on the image below that I think portrays an almost romantic view of them. 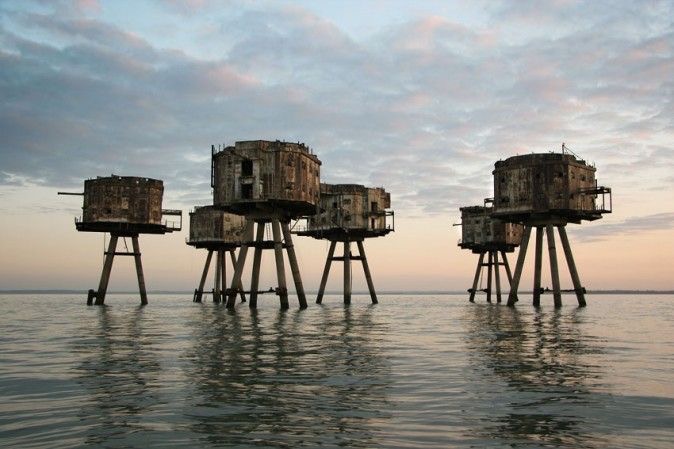 As I’m trying to do increasingly, I started with a little pencil study. These are proving really valuable as, whilst I’m sketching I’m looking more closely at the subject matter, understanding how it works, what are the most important elements and how I might achieve those colours / effects in watercolour. Surprisingly, I’m also enjoying the process of drawing, of adding then taking away (a tremendous novelty for a watercolour painter!) and I’m also pleasantly surprised with some of the results – not so much this one perhaps, but the thinking that went on as I was doing it proved invaluable.

You’ll see that to the right of the painting, I only sketched in one of the structures as opposed to the two in the photograph. This just seemed to create a better composition, perhaps with a little more tension. And so to my painting. I approached this with a view to doing a Hilderesque layering of washes for the sky, and a more wet into wet treatment of the sea. I wasn’t too worried about the detail of the structures as it was more the majesty I was after rather than an exact representation. Sadly, I started this painting when surrounded by domestic distractions – this led to me taking my eye off the ball a little with the resulting cauliflowering along the horizon line which really annoyed me. When I reached the sea, I felt I was painting more in hope rather than with confidence in what I was doing. I was applying wash after was onto already damp paper. This, and repeatedly trying to lift off paint to indicate some movement on the surface of the water, gradually led to the painting becoming overworked.I did like the treatment of some of the forts, and thought that the virtual silhouettes of these structures with very little detail was what I was after. I didn’t completely dislike this painting, but I did think that I could do better.Learning from my first effort, I did the sky in two washes and feel that it’s much more satisfactory, with more depth and movement than the first version. I also tried to paint the sea in a lighter, and more confident manner. I did a graded wash, then whilst this was still damp, lifted out some of the large vertical areas of light that coming between the towers, and then left this to dry completely. I then added the dark ripples in the water, trying not to overdo this, and also trying not to go too dark.The sea forts themselves were left with relatively little detail aside from their overall shape.

This second version was much closer to what I’d been hoping to achieve with this painting. I think this is largely to do with the sky which has a certain depth and grandeur to it. As however David acknowledges in his final post – this subject is unlikely to be much of a seller!  I think as a technical challenge, it definitely served a purpose. And I think as a companion piece to David’s painting – the a distant view and a more close up view, and differing styles of painting, there’s a certain synergy.

On that note, I’d like to thank David for leading me to tackle a watercolour challenge that I otherwise doubt I would have considered. I’ll leave you for now with a short aerial view video of one of the Maunsel sea forts that I think captures, a little more successfully than I managed with my painting, the majestic eeriness of these strange structures.