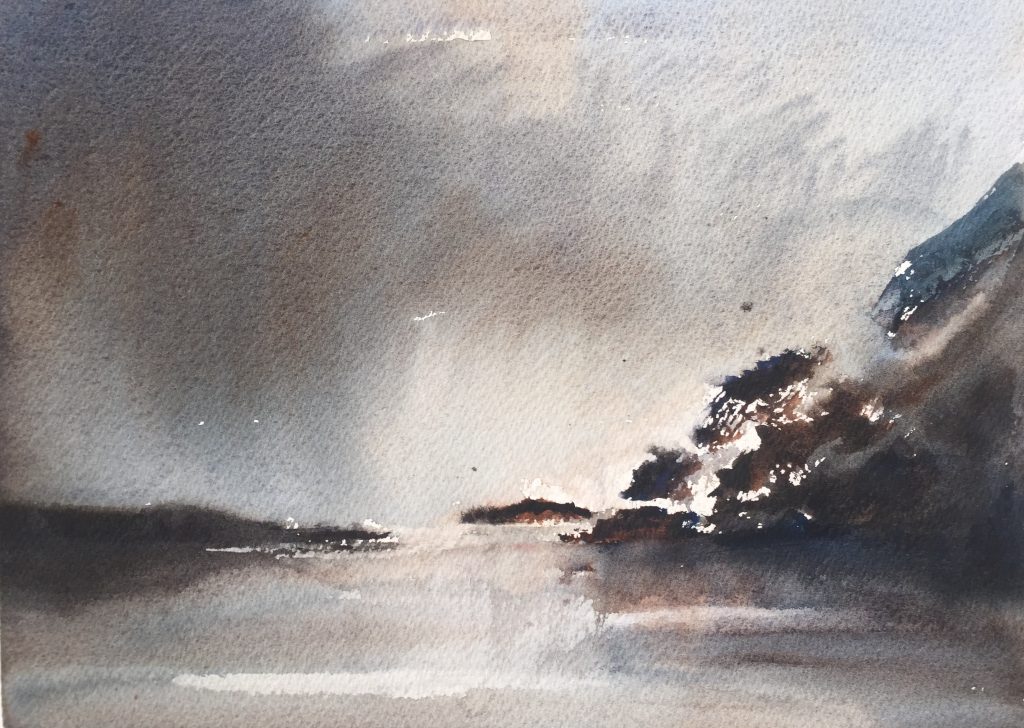 So, after last week’s foray into the layered washes of Rowland Hilder, I thought I’d do a quick compare and contrast of techniques. Recently, Edo Hannema mentioned the name of Aubrey Phillips to me and he’d written a whole blog post about how much his eponymous book, ‘Watercolour Painting with Aubrey Phillips‘ had been an inspiration to him. I’d never heard of Aubrey Phillips but if he was good enough to inspire Edo, then I figured I should find out more about him and trotted off to eBay to pick myself up a copy of his book.

If you like the looser style of watercolours as epitomised by Wesson and Seago, then you’ll find much to like about the approach of Phillips. His work is similarly immediate, trying to capture the spirit of a moment rather than an accuracy of detail. So, with that in mind, I decided to follow one of his step by step demonstrations, but to try to put my own mark on it. In the book, he’d done a charcoal sketch of a moody coastal scene which he then did a painting of. The charcoal sketch was full of atmosphere but short on detail, but not so short that I couldn’t derive a quick pencil sketch from it. I say quick, but this did take me a while to complete and get to point that I felt I could use it as a basis for a painting.

I thought I’d best put a descriptive caption on this in case it wasn’t clear from the sketch quite what on earth it was! Anyway, sketch done I set about trying to follow the three or four steps as outlined by Phillips. The first was to work quickly and wash in as much of the painting as possible in the first go. I set about this task with great enthusiasm and gusto. I was trying to be mindful of the breaking waves, and to try to leave some white of the paper here and there but I found it difficult to achieve any form of ‘dry’ brush strokes whilst simultaneously laying on a wash with a heavily laden brush. The result was that I got very sharp edges. I also got depressed and despondent after step one and gave up on this effort, not even sure that I could return to this subject ever again!

After a short while away from the easel I thought I’d give it another go. On this occasion I worked quickly again but much wetter, constantly flooding in more and more colour. I intended to keep back some white for the foaming waves… but failed. This time however I didn’t mind as I liked what I was seeing so just kept going until I felt it was time to stop. Now even though this doesn’t resemble the sketch, I really like this painting.

I think it’s mysteriously evocative – I’m not quite sure what of, but therein I think lies its attraction. It has a range of potential connotations, and scales too. It could be quite an intimate scene, or it could be a much grander vista. Either way, I thought this had a certain something that really pleased me.

Feeling slightly better, especially as this took hardly any time at all to do, I was all set for another bash. This time however I decided to work backwards. I thought that I may be able to save the white of the paper more effectively if I painted in the darks first, and then apply the washes afterwards.

Oh, I should perhaps mention that none of these paintings had any preliminary sketching out. As I wasn’t looking for detail as much as I was atmosphere, and the composition only has a few elements, I didn’t think it was necessary. So, for this one I applied my darkest tones first. This enabled me to get some nice dry brush features that could suggest the foaming spray of breaking waves that I could then work around with the subsequent washes. This was much closer to the sketch and scene that I was seeking to capture, but I thought I’d gone in too heavy with the darks – that they were a little too dark, and that they deaden the image.

Once again, this didn’t take long to do and I was now having a whale of a time – so I couldn’t resist another go. This time I followed the same darkest tones first approach, but tried to vary the colour of the darkest tone more – to keep it a little lighter and more interesting in colour.

I was largely pleased that this painting corrected some of the failings of the previous version, but I’d also lost some of the drama along the way. Fortunately, I still had the time and the inclination to have another crack at this. After all, I was having an absolute ball. I loved the wet into wet approach, seeing how the paint performs, how colours bleed and interact with each other – it’s pure magic, and surely what the essence of watercolour is about.

With this next painting I spent much more time on the sky, constantly flooding in more and more colour, and moving the wet paint about on the surface on the paper. A friend had commented on the original sketch that the sky had a real energy to it, and I was keen to try to capture this energy in the sky and thought that the brushstrokes might help convey this. Again, I started with dark tones first and then worked around them.

I have to confess that whilst it still only bears a fleeting resemblance to the original sketch, I’m really pleased with this final version. I’m not sure it says breaking waves – but I’m definitely getting a stormy sky. The contrast between the darkest rocks against the lightest areas of the sky helps with the drama and provides a strong focal point. I also like the economy of the foreground and the richness of the colours.

It was great to finish this little session of painting with something that I really like. Looking at the four together, my stand out favourites, for completely different reasons, are number 4, and number 1. As ever, I’d be interested to hear what anyone else thinks of these and whether there’s any consensus of opinion. All in all though, I had a great time doing these, so thanks very much to Edo for the introduction to Aubrey Phillips.

Thoughts on One sketch, four paintings, loads of fun!

23 thoughts on “One sketch, four paintings, loads of fun!”