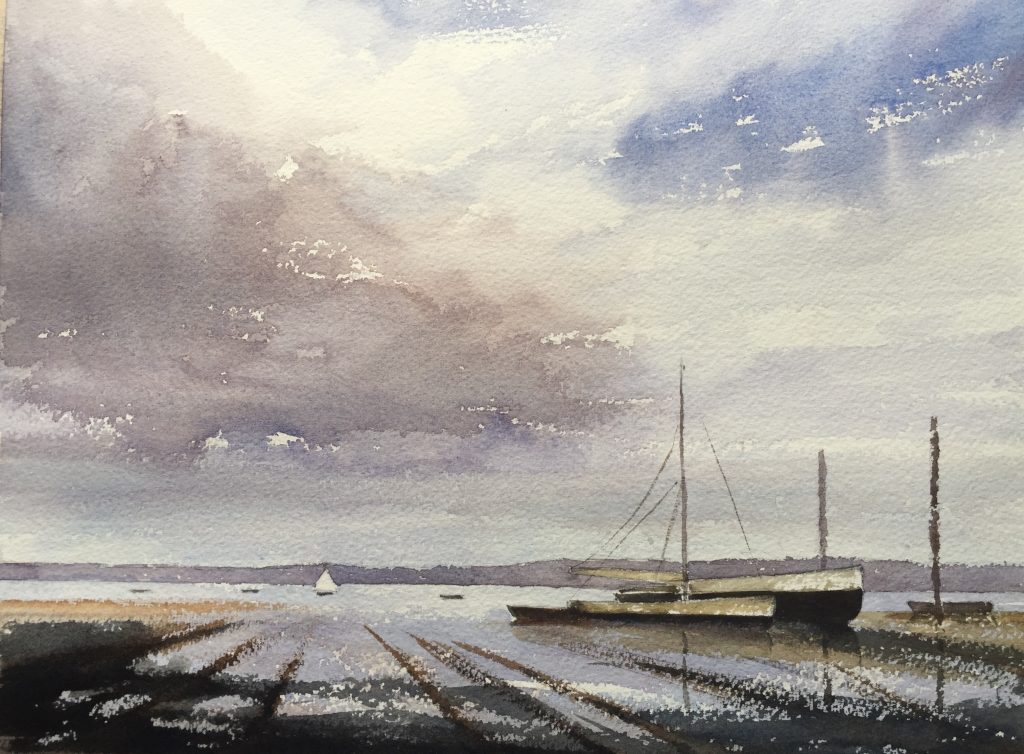 So much to say…

…and so little time to say it in! This is one of those weeks when I’ve managed to squeeze in some time for painting but left so little time for writing about it, so apologies in advance for the brevity of this post. (Although I’m sure that this will come as an absolute blessing to many!)

So, first up is a little homage I did to acknowledge the birthday, on 29th April 1910, of one of my great artistic heroes, Edward Wesson.

I really enjoyed painting this, especially the sky… right up until I was putting in what Joseph Zbukvic refers to as ‘the jewelry’. In this instance, the rigging on the boat. I’ve become quite confident with doing fine straight(ish) lines, but a curved, sagging line… well that’s an entirely different matter. In this case, my supposedly delicate bit of rigging is actually thicker than the mast it’s supposedly attached to. Hopefully this is generally lost in the overall picture,  but from my perspective – it really SHOUTS out at me because I could feel it going wrong as I painted it but was then powerless to rectify it. And therein lies the beauty and wonder of watercolour – you live (and often die), by your last brush-troke (metaphorically of course!)

And so on to something I’ve been both promising and avoiding for some time now. Taking an oil painting, doing a tonal pencil sketch, and then basing a watercolour on the sketch.

Now as sketches go – mine especially, I quite liked the this. I was pleased with the placement of everything and tonally I thought I’d given myself enough to work with. What I particularly liked was the thinking processes that went on as I did this. Aside from thinking about the overall composition, I was thinking about the palette, what colours would I use, in what order would I paint this, where would colours bleed, where would edges be hard. It’s as I was doing this that I really began to marvel at Seago’s mastery. The way the background coastline picks out the sail and shape of the boat, the white sail on the horizon – everything is positioned exactly where it needs to be to make visual sense.

So. Sketch done, time to get on with some painting:

I really liked painting the sky on this, which was done in two quick washes in rapid succession. Sadly, also in rapid succession, I also painted in the distant headland, so that it bled into the sky. At this point, I’d pretty much already decided that this wouldn’t be my last attempt at this! This decision did give me a certain freedom to paint without care.

I’d always worried about capturing the reflections, and especially the edges of where mud meets water, and where shallow water acts as such a brilliant mirror. I’ve seen it done brilliantly, but equally have never figured out how it’s done brilliantly!

So, onto version two:

Again, much fun had painting the sky. Two washes done standing up at the easel with wide, sweeping gestures – rapidly applied onto paper that had been pre-wetted in certain areas. I went in much bolder in the foreground, again using broad sweeping brushstrokes, and again got carried away and left too little space for the water and reflections. I also felt that I went in too heavy with the verticals near the boats, and too heavy with the distant shoreline so that I lost the feeling of depth. Nothing for it then but for another attempt!

Okay, so what I tried differently on this version, aside from trying to correct the errors that I’ve already mentioned, was to really place everything ‘just so’. After taping out my paper, I measure thirds across the page, and fifths down the depth of the page. The horizon line was placed at a fifth. The mast of the boat was a third into the painting, and the sail on the horizon was on the other third. An imaginary vanishing point was put on the horizon line and I put in some guidelines to direct the foreground lines towards the sail (seen in sequence I reckon it could give the impression of this boat sailing along a quite a clip!)

As much as I enjoyed painting the sky, I’m not sure it’s my favourite of the three. I also think that the precision of this approach, and it being my third attempt, led to me to  tighten up in some areas, especially around the boats. Overall however, I think this is the strongest version in its entirety, even if I do prefer elements of the two earlier versions. Be great to hear anyone’s views on these efforts but for me, the most enjoyable thing that I take from all of these is that I can’t wait to take on my next challenge – and who knows, I may even attempt another sketch!

Thoughts on So much to say…