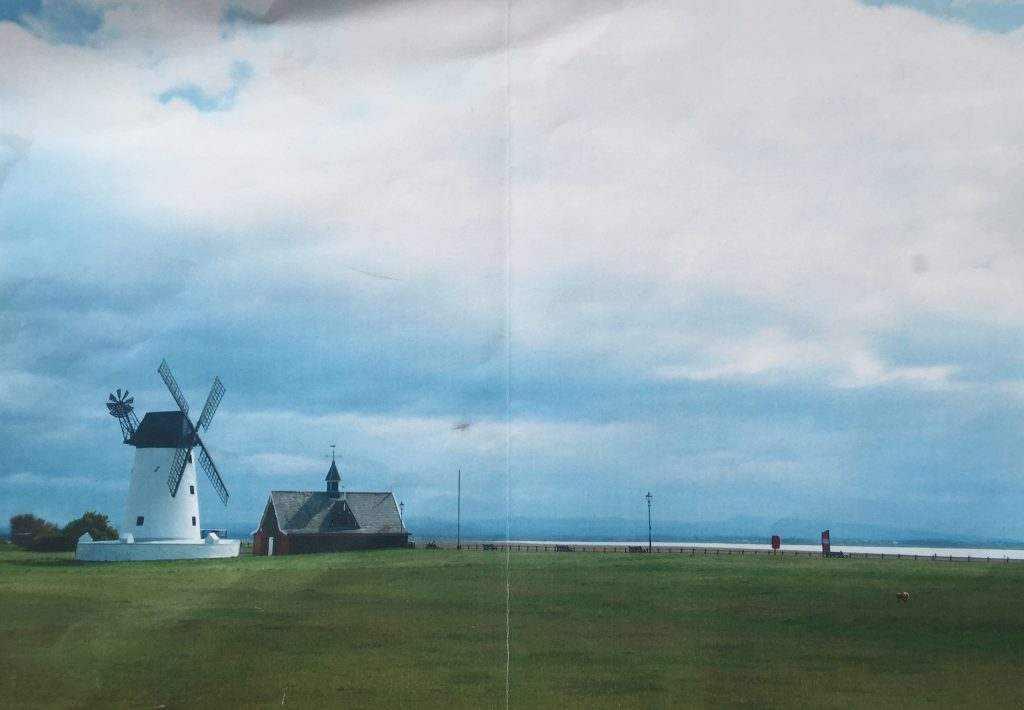 If at first you don’t succeed…

If at first you don’t succeed, try, try and try again. So the saying goes.

I can’t decide whether the originator of this simply cracked it after three attempts, or the recommendation is that you give something three attempts and no more, or if the three attempts is just the beginning and that you should endeavor to keep on trying until you succeed or lose the will to live. Based on this week’s painting experiences, I’m inclined towards the latter of these statements… and I’m beginning to think I know why too.

But first, some background. Word has reached my dear elderly mum that I’ve been doing some painting… and she’s said that she’d very much like to have one… and her birthday is fast approaching… and I don’t have any better ideas. So far, so simple. However, rather than present her with something that, aside from me, she has no particular relationship with, I thought I’d try to paint a view that she’s familiar with, that she’ll be able to relate to. Scanning my photo archives, I came across the picture above, of the Windmill on the seafront lawns at Lytham and St. Annes. It’s as much of an iconic building as the area has (without heading a bit further up the coast to Blackpool and its much taller tower of course). Now it’s not a scene that I’d normally be drawn to, but I saw it as a challenge to try to do this some artistic justice, plus I thought the photo captured a strong enough play of light for me to be able to paint something reasonably interesting.

I first did a very quick pencil note just to pick out the main areas of contrast. (Apologies for the paint splodges all over the place – they were a consequence of some rather indiscriminate splattering that followed on from this thumbnail sketch.) 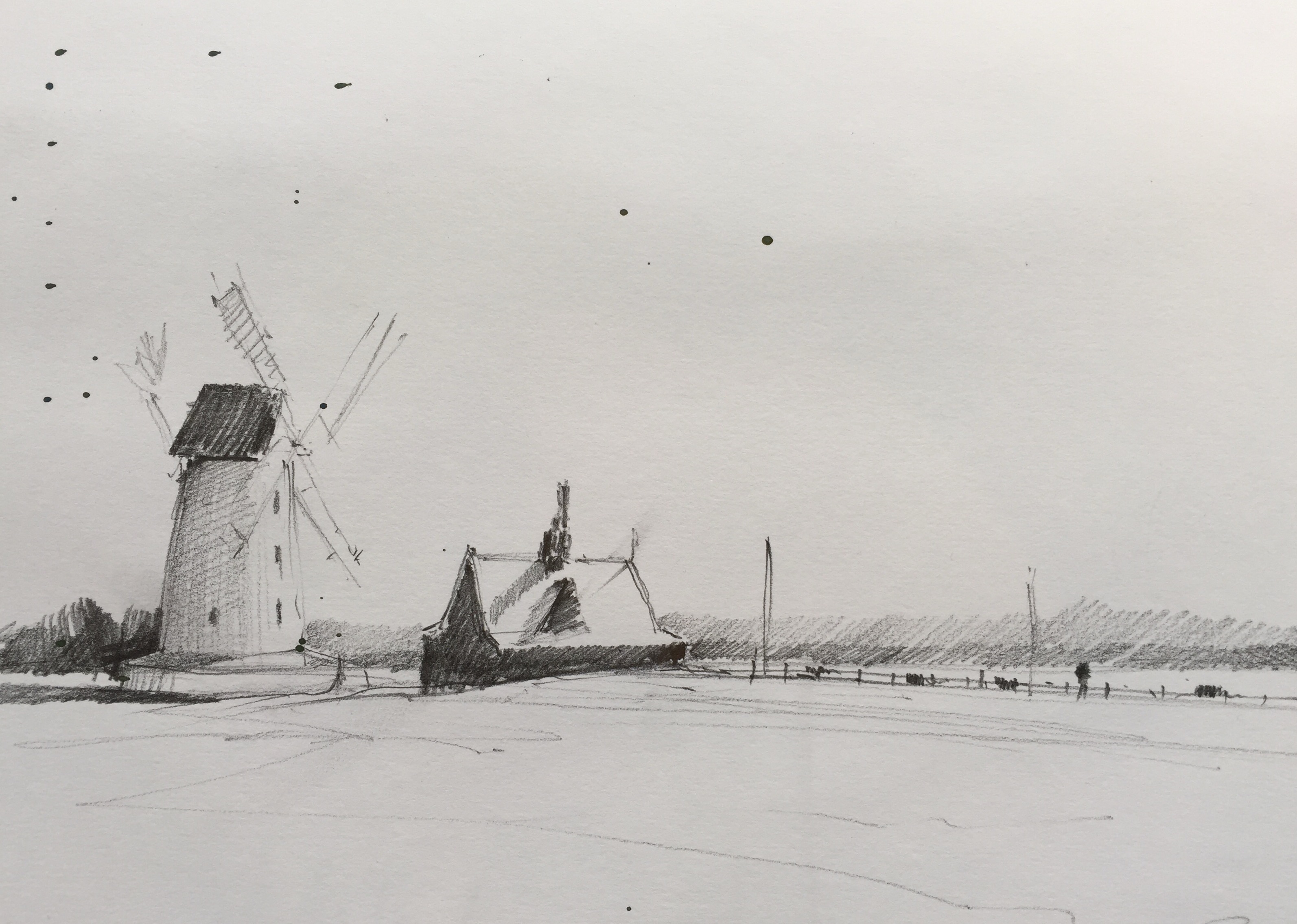 Then I launched into my first painting of the scene.

I quite liked the foreground treatment which, even in the photo is pretty flat and unvarying. I painted this quite simply and, whilst the wash was still wet, splattered in some colour to give a bit of texture. Similarly, I also introduced some greater variety and texture into the sky. I initially thought this was okay but could still be improved on.

So, I tried again.

Now the more I looked, the more dominant the buildings were and, compositionally I didn’t like the direction of either of these efforts. The landscape in that area is quite flat, overlooking a tidal plain towards the opposite coastline of Southport, Liverpool and, in the far distance, Wales.

I decided that the composition would be improved by showing the buildings more in this context. I also felt that having to ‘cut’ around the buildings with my first sky wash was hampering the enthusiasm and freedom that I’d like to apply to the sky, so I decided that I’d try masking these areas out. This led to take 3.

Now compositionally, I like this much better. But not so much that I didn’t think it could be improved upon. So, take 4.

Now I actually enjoyed painting this one, perhaps a little too much as by the time I’d put in such a dark tonal value for the sky, everything else went that way too – to the extent that this looks like the view under an intense full moon rather than a shot of bright daylight – atmospheric maybe, but not what I was after.

By now I was becoming pretty frustrated – not just with the process but my inability to correct my own errors. I was also frustrated with the inconsistency of my drawing – every time I sketched out the scene, the size, proportion and relationship of the buildings was dramatically different. Still, I felt I had enough of a handle on things that, with one more effort, I’d finally crack it.

So, here’s my fifth (and final?) effort:

Now I do think that, comparing them all side by side, this is the most ‘complete’ / least offensive of the five. Or, is it ‘Try 3’. Or maybe ‘Try 4’? Needless to say, I’m still far from happy.

Reflecting on this experience – I think what I’ve learned is that I’m still not sufficiently accomplished that I can make anything look good! I wouldn’t naturally be drawn to this view – nothing against windmills of course and I fully expect them to feature in many more of paintings in the future. It’s just not a view that particularly inspires me.

I also don’t feel that I’ve been able to interpret this view in the manner of painting that I’m striving towards – that of loose, spontaneous immediacy. Some of the skies are ok, and some of the foregrounds are ok, some of the distant shore lines are ok some of windmills are okay.. need I go on. Across the five paintings, there are some okay bits but none of them work sufficiently well together in a single image. Whenever I get onto painting the buildings, because of the edges and quite distinct shadows, I really tighten up when I paint them – they somehow become much more illustrative rather that painterly.

Whilst my latest attempt is okay, and will probably look even better with a mount around it, I’m generally dissatisfied with where I’ve managed to get to with this subject matter, and it’s driving me ever so slightly mad!

After vowing that enough was enough, and after a night’s sleep, I’m already toying with the idea of another attempt, albeit with a slightly different and looser approach. I fear that reading this post and seeing my efforts may be almost as painful for you as it has been for me – for which I’d like to offer my deepest apologies. I shall be striving for a much more successful and upbeat post and painting/s for next week – but in case there’s anything to learn from this, some notes and observations:

Finally, any thoughts on exactly how many efforts one should try before giving up would be most welcome as I already think that I’m way over the threshold.

Since writing this entry, I’ve already sketched this scene out again and have been mentally mixing paint, applying brushstrokes and visualising, step by step how I’m going to tackle this. Now I just need to carve out some time to put this to bed once and for all and, if what I see in my mind’s eye comes to fruition, it will look markedly different to anything you see here!

Follow John Haywood Watercolours on WordPress.com
PrevPreviousWhere to begin with so many firsts?
NextA happy(ish) endingNext

Thoughts on If at first you don’t succeed…

14 thoughts on “If at first you don’t succeed…”