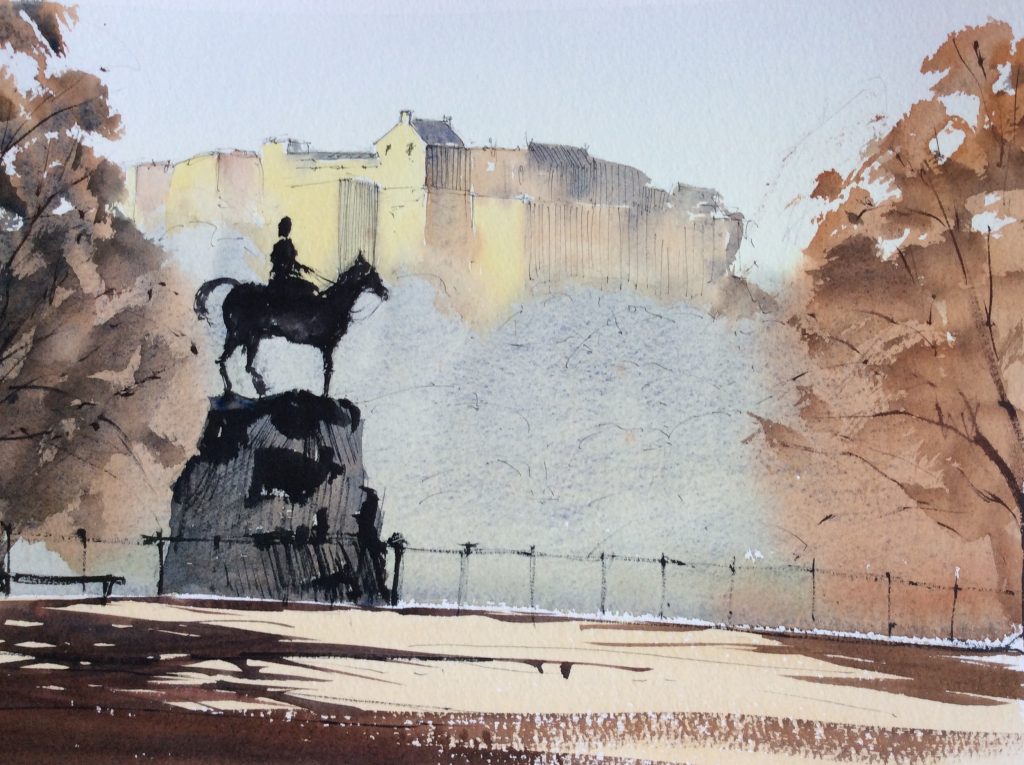 …and now for something a little different…

I suppose I see myself as a bit of a watercolour purist – that’s not to say I’ll never use masking fluid or white body colour for highlights – but I’ve never really ventured down the pen and wash avenue. As I’ve lately been looking more closely at Edward Wesson’s work however, it’s impossible not to admire what he achieved in pen and wash so I thought that the least I could do was to dip my toe in the water. (Apologies for my mixed metaphors – not sure what avenues and bathtubs have got to do with any of this!)

I was drawn to Wesson’s ‘The Scots Greys Memorial, Edinburgh’ for a number of reasons. First and foremost, and not wishing to suggest any lack of ambition, but it seemed to be a very gentle entry point compared to many of his more detailed pen and wash works. Secondly however, about twenty years ago, I worked on Edinburgh’s fabulous Fringe Festival which saw me take up residence in the city in August for a couple of year’s running. It’s a stunningly beautiful city and, especially during the frenetic festival season, unlike any place I’ve ever visited. So Wesson’s image of the The Scots Greys Memorial brought back many a happy, and I confess, many a blurry memory.

In his artist’s monograph ‘Edward Wesson 1910 – 1983’ author Barry Miles notes that Wesson often employed pen and wash to portray more detailed scenes, particularly those that featured architectural elements – and that these works subsequently felt slightly bolder than his traditional watercolours. Wesson himself commented that:

“A rolling pastoral landscape without much detail in it, and with no large shapes, does not call for any pen work. Strong line and hatching would only hinder the soft rolling nature of the subject and would get in the way, especially in the distance. A busy street scene or piled up roof tops, chimney stacks and windows would however, be helped very much by drawing with the pen.”

I also found it interesting to read that he used an even more limited palette when using pen and wash, saying that “Because of the ink drawing, I feel that a limited range of colours over this will be more dignified. I don’t think that red, white, or blue go well with ink but would suggest Payne’s Grey (in place of any other blues), burnt umber, burnt sienna and raw sienna will make for a better scheme. These colours will cover all we have to say.”

I’m not so sure that I achieved the dignity that Wesson alluded to but I quite enjoyed the limited combination of pen and wash in this image – which was mainy used to suggest the shape, form and some details on the castle. The mid-ground, which is a tree lined valley leaves something to be desired, like any real description of what’s actually there, but my favourite part of this sketch by far, albeit one of the tiniest elements, is the shadow area in the bottom left hand corner that suggest broken light coming through the trees.

I also thought that as an approach to a particular subject matter, where there’s a very clear focal point, that I might look to employ a similar approach again. There’s a particular monument not far from me that I have in mind to look at in more detail to see whether I could do it any justice!

As enjoyable as I found this as an exercise, pen and wash is unlikely to sway me away from pure watercolour very often, but equally, I like to think I’ll be a little more discerning about which is the best approach to take depending on the subject matter. As the great Wesson observed “So we tend, with practice, to make this assessment of a subject and employ the appropriate medium accordingly.”

And, speaking of practice, I’ll be back with another endeavour very soon!

Thoughts on …and now for something a little different…